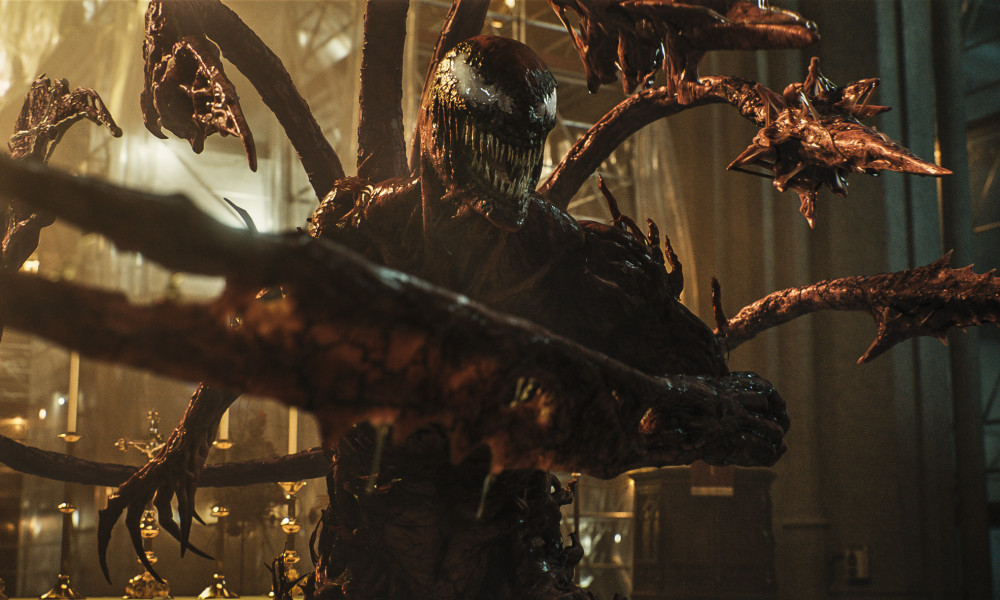 One of the benefits of producing a sequel is that the filmmakers can build upon what has already has been established, which is exactly what director Andy Serkis (Breathe) and VFX supervisor Sheena Duggal (The Hunger Games, Agent Carter) have accomplished with Venom: Let There Be Carnage.

“Venom and Eddie Brock [Tom Hardy] are still in a symbiotic relationship, but they’re more of a squabbling couple who get on one another’s nerves,” notes Duggal. “We get to see much more of Venom’s individual personality. For example, there is a scene in which he uses multiple tentacles to cook Eddie breakfast and another where they have a physical fight. We hadn’t developed anything this extensive in the first film, and this time around we leaned much more into the comedy of these moments.” 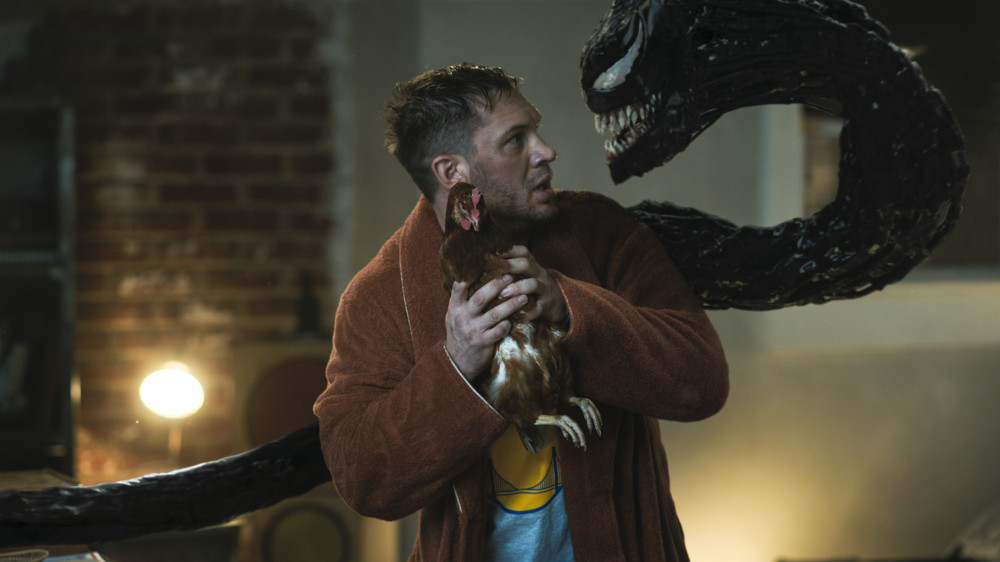 Something that was unforeseen was the lockdown caused by the coronavirus pandemic.  “Working from home across multiple time zones was enormously challenging and everyone was using different ways to communicate,” recalls Duggal. “Initially I didn’t have a server setup in my house, so that, coupled with limited bandwidth internationally, meant it was too hard to download directly from the server in the U.K. I would spend hours downloading Aspera data packages from the visual effects vendors, editorial and concept artists on my laptop!”

Duggal says the process required a lot of persistence and practical intelligence to meet the team’s initial goals. “We did some additional photography during the lockdown in the U.K., New York City and Toronto. Our actors were in different countries although sometimes acting in the same scene. We did a lot of previz and tech viz to figure out how best to shoot. I was lucky to have the help of additional VFX supervisor Marty Waters, who is based in the U.K. and was our shoot supervisor during principal photography. Tools like QTAKE and Moxian made it possible for me to be connected to the set and give feedback on the visual effects work.” 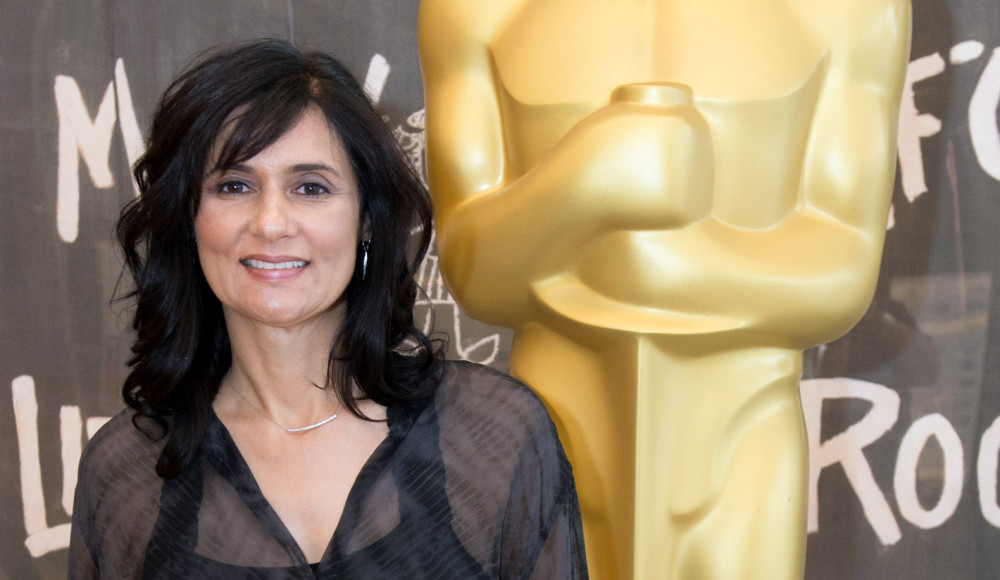 Among the improvements the VFX team were able to achieve was the cloth interaction with the tentacles coming out of Brock’s body. “The idea is that the Venom symbiote seeps through his pores and increases in bulk. It pushes through the threads of his clothing, creating many small tentacles, which then combine into the creation of the full-grown tentacle,” explains Duggal. “Creature effects were devised to create all the tentacle and clothing interaction.”

About 1,323 visual effects shots are in the final cut with sharing taking place between an in-house team, DNEG, Framestore, Image Engine and, in some cases, The Third Floor for camera blocking. Duggal notes, “The desire was for Venom to be even more realistic and fierce, so DNEG, led by VFX supervisor Chris McLaughlin, updated his muscle system which makes use of a three-layer muscle/fat/skin simulation. An entirely new facial rig allowed for better lip-sync, dialogue delivery and general performance. More weight was added to his animation. The Wraith Venom appears in many more shots this time around, so the animation rig was rebuilt and new development work had to be undertaken, as well as redesigning Wraith’s connection to its host [which was not visible in the previous film].” 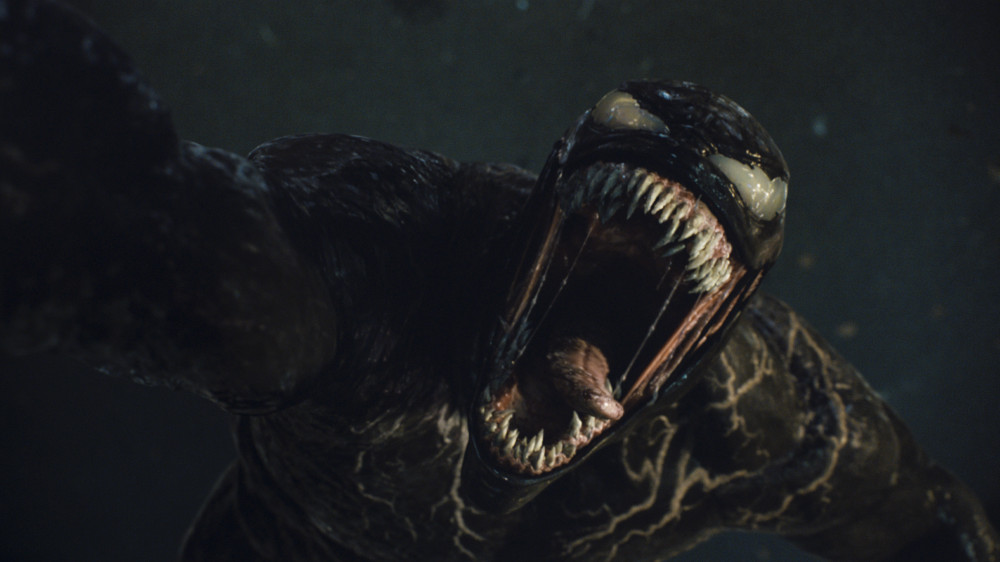 Serving as the primary antagonist is the symbiote Carnage, the alter ego of serial killer Cletus Kasady (portrayed by Woody Harrelson). “I decided that it was beneficial to sculpt a maquette to give us something physical for everyone to interact with early on rather than waiting for it to be built in CG,” explains Duggal. “This allowed us all to see how the character was going to look and gave me something to do lighting studies with. The maquette was 3D scanned and became the basis of the digital model.”

According to Duggal, Carnage is a more complex character than Venom. “He has more transformational abilities, including the ability to have multiple weaponized tentacles, to project weapons from his body and to use his biomass to grow and expand to any size he wants,” says the VFX supe. “Unlike Eddie who is hosting Venom, Cletus births Carnage and they share DNA. Based on some concepts from Danny LuVisi, we created complex anatomical transformations where we see the shared anatomy being broken and ripped apart. When the tentacles first grow, I looked at the intertwining growth of tentacle-like mold and vines. To get ideas for the weapons, I looked to animals in nature and how they use them.” 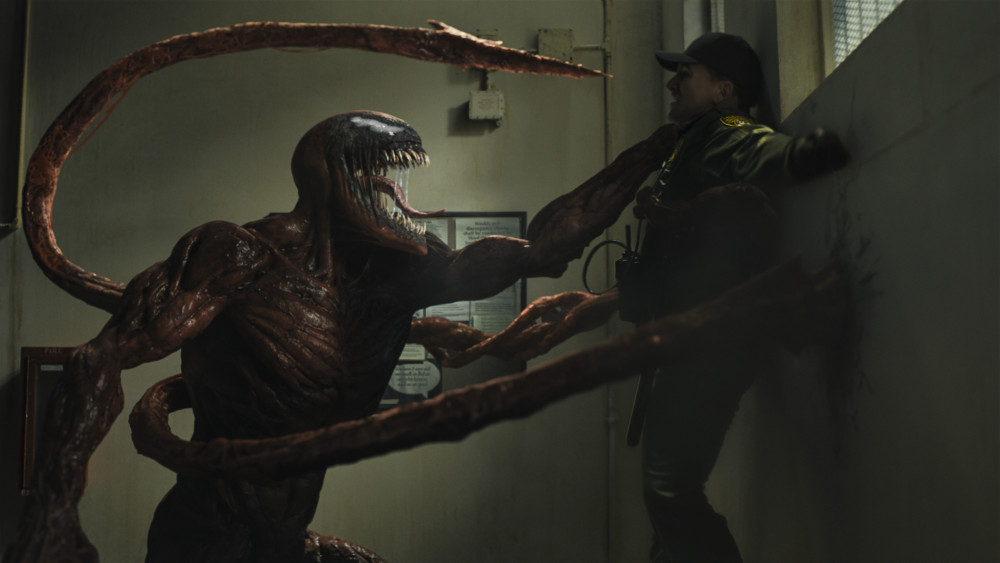 “We also had to sell the idea that the symbiote had a serial killer as a host so I had to come up with ways to make him scary and dangerous and add that extra bit of unhinged to his character,” she notes. “We definitely did that with the way Carnage moved and held his body, the weapons, and the rage tentacles.”

Digital doubles such as digital face and limb replacements were needed for the Shriek transformations, the female symbiote that lives inside of Frances Barrison (Naomie Harris).  “Shriek has a powerful scream that we had to visually convey. We looked at sonic booms and cymatics, the study of visible sound and vibration,” remarks Duggal. “It’s something I’d researched in the past and it was perfect for this as it gave us an added extra layer of complexity.”

To achieve the desired effect, Image Engine (who completed all the Shriek shots) relied on two ingredients — the visual representation of the scream and its interaction with the environment. “The representation was executed using a combination of effects layers and comp treatment,” Duggal explains. “How it interacted with the environment ranged from replacing live action props to making them fly around a cell room, to fully replacing Shriek digitally so we could make her cheeks, hair and clothes react.” 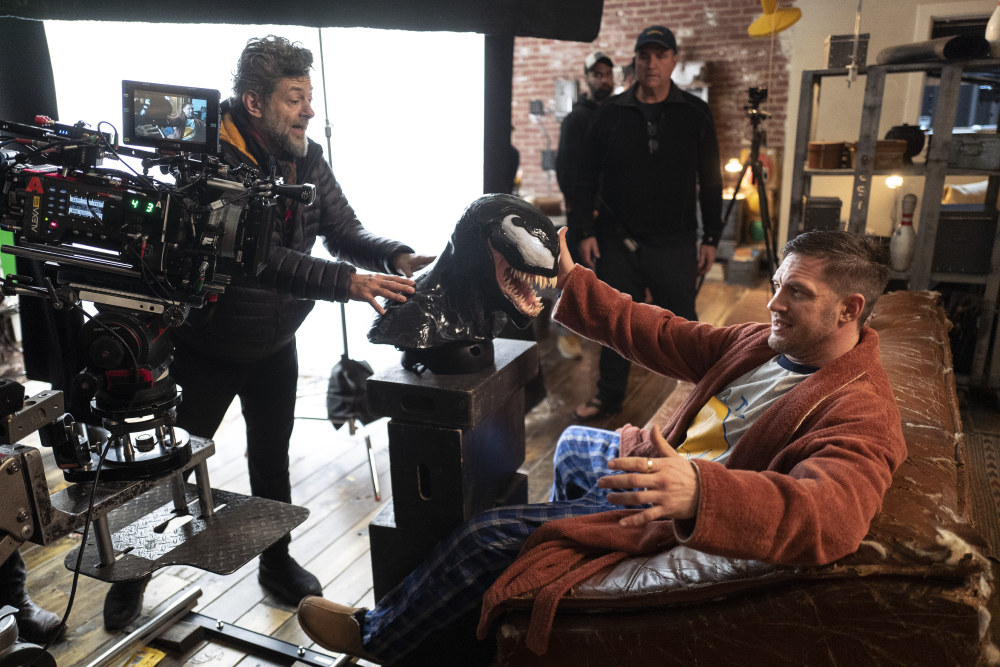 Director Andy Serkis gets star Tom Hardy to play nice with a stand-in bust of Venom.

Digital Doubles to the Rescue

DNEG and Image Engine created digital doubles of Brock and Kasady for the scenes that take place at the Ravencroft Institute for the Criminally Insane and Grace Cathedral. “These were used as fully CG characters where stunts were not feasible as well as in all of the character transformations between Eddie/Venom and Cletus/Carnage,” Duggal points out. “To some degree, digital doubles were also used for Mrs. Chen/Venom and built for other non-lead characters who transform.”

The film also required extensive CG world building. “Once we get off the ground in Ravencroft, all the environments are fully CG, featuring CG assets:  Shriek, Cletus, ‘67 Mustang, Kia Tellurides and Carnage [shared DNEG asset],” says the award-winning VFX supe. “There were many FX elements created as well from simple atmospheric effects to complex car and building destruction, and a couple of Carnage transformations. The Grace Cathedral set was shot on a bluescreen stage in Leavesden Studios, with some of the set built. Everything becomes fully CG once we get up in the air and they are fighting on the bell tower. This was the most complex sequence for DNEG, was nearly half of the assigned shots and required their largest environment build because in the film the cathedral is under renovation/construction. Eddie’s apartment had a greenscreen exterior and there were many miscellaneous greenscreen shots spread throughout the film.” 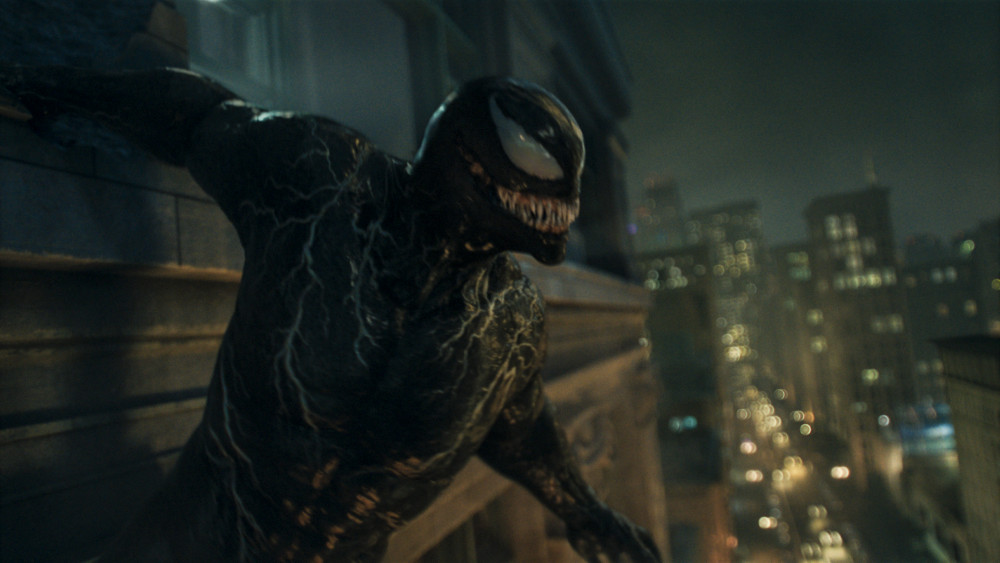 Duggal says one of the highlights of the project was working on a beautiful storybook animation piece that was shot on greenscreen, with Eddie and Cletus sitting at a table while postcard drawings come to life. “It required creating an animated sequence telling the twisted backstory of Cletus, a maniacal serial killer, using his deranged doodles on a postcard as a device,” she recalls. “This was a highlight for me as well as for Framestore VFX supervisor Dale Newton.”

Venom: Let There Be Carnage set pandemic-era box office opening records in the U.S. ($90M) and overseas, surpassing $100M in its fifth day of release. The film is currently playing in theaters around the world through Sony.