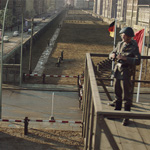 RISE recreates the not-so-distant past of a divided Germany for Guy Ritchie’s stylish The Man from U.N.C.L.E. By Karen Idelson.

Guy Ritchie’s The Man from U.N.C.L.E. pays homage to the classic Cold War era spy films in all the ways that delight an audience – cool characters, sexy locales, stylish fashion and dynamic car chases. These are all the ingredients that have made spy films of any era an exercise in combining the slickest elements of filmmaking.

Despite being enamored with this imagery, it isn’t long before Ritchie leaned into modern tools to update all the best elements of the spy genre. After all, this film was a new take on a classic 1960s TV show, and contemporary moviemaking means the director wants more control over things like a race between two classic cars — and that he can use CG to get it just the way he wants it.

Early in the film, the three main characters — Napoleon Solo, played by Henry Cavill; Illya Kuryakin, played by Armie Hammer; and Gaby Teller, played by Alicia Vikander — find themselves locked in a desperate chase through East Berlin. Hammer, behind the wheel of a Trabant, is pacing Cavill and Vikander as they put the pedal to the metal in a Wartburg. Interestingly enough, these two cars are not exactly known for their speed.

“When we saw the cars – and the Trabant and the Wartburg are two of the slowest cars you can imagine – we wondered how they were going to make a chase with these two cars exciting,” says Florian Gellinger, visual-effects supervisor for the German company RISE, which worked on more than 300 visual-effects shots for U.N.C.L.E. “But Guy Ritchie had imagined it in a really interesting way.”

The Trabant and the Wartburg are storied cars of the Cold War era and associated with the style and deprivation of the East Germany that existed then. The Trabant gained notoriety worldwide when the rock band U2 incorporated it into the staging of its early 1990s Zoo TV tours.

After shooting these chase sequences using practical methods – actual Trabants and Wartburgs specifically altered and transformed into movie cars and cutting-edge rigs designed with camera mounts to film the cars while they were being driven at high speeds – the director decided he wanted to alter the look of what he had, and that’s where RISE came into the picture. The company had been on-set since the beginning of shooting and had scanned all the elements being shot.

As the filmmakers realized how much they wanted to add and change – things like close ups of the characters during the chase, zooming in and out of the car windows as the cars sped along – it was clear they would need to replace the real cars and the real sequences that were completed with CG cars for the final sequence. And the practical footage that had already been shot was going to be especially useful.

“Once you have all the lighting information from the real cars you can use it to make what you’re doing in CG look that much better,” says Gellinger. “You’re not just working with something that’s only been in the computer.”

That information made it possible for Gellinger and his team to add details like a certain realistic reflectiveness on the hood of the Trabant or the Wartburg as they passed underneath a light or became dirty during the course of the chase.

At the end of the long, perilous chase through East Berlin, the Wartburg becomes wedged between two buildings and the filmmakers went with full CG for that shot because the practical complications made it difficult to stage and complete with the look and humor the director wanted at the finish of the sequence.

Gellinger and his team also invested a lot of their time in the East German backdrops to make them as true to the actual construction standards of the era as well as the feeling of the time and place where the story exists. The research became more involved than they anticipated because much of the construction from the Cold War era was torn down or redone after the Berlin Wall came down and Germany was reunified.

Ultimately, they did extensive scanning of areas in Poland, which had buildings that were largely as they were during the Cold War. But there was still significantly more work do be done to get the look right.

“It wasn’t just doing all the scanning we did, which was very important to the look of everything,” says Gellinger. “We had to learn about all the construction standards in East Berlin for that time, that you had to place a certain number of windows in a certain place and that the floors had to be a certain thickness and on the streets there were certain types of plants and trees that had to exist there.”

Gellinger and his team also were careful to create the kind of distressed look that fell over so many buildings in East Germany during this time. Everything had to look run down and left behind in order to set the scene for a generation of moviegoers that might not be all that familiar with the period. They were looking to create a texture that was believable.

No self-respecting Cold War spy thriller would be complete without a shot of the Berlin Wall or Checkpoint Charlie and U.N.C.L.E. doesn’t leave out these significant shots. In a genuinely symbolic moment, the American agent Solo is able to take the German spy recruit Teller over the Berlin Wall and into West Berlin to safety, just barely escaping the pursuit of a KGB agent.

And what do they use to escape certain peril? A zip line. Well, a zip line and some great CG.

“The zip-line sequence where they escape over the Berlin Wall was done entirely with CG,” says Gellinger. “It was another situation where they wanted a very specific look and thought the way to get it and get exactly what they want was CG.”

Karen Idelson is a Torrance-based freelance writer. Her mother escaped from East Berlin to the free West just after World War II. Sadly, Napoleon Solo wasn’t there with a zip line to help her cross over.

Continue Reading
You may also like...
Related Topics:Florian Gellinger, Guy Ritchie, The Man from U.N.C.L.E.