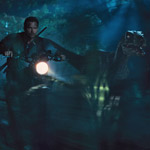 ILM revisits and remixes its iconic digital creatures for the return visit to the land of dinosaurs in Jurassic World.

Though barely a drop in the bucket on the geologic scale of time in which scientists discuss real-life dinosaurs, a lot has changed in the creation of the digital versions in the 14 years since moviegoers last visited the world of Jurassic Park.

And the visual effects artists at Industrial Light & Magic have tapped into new animation, lighting and rendering capabilities to give Jurassic World, due in theaters June 12, a new breed of greatly improved digital dinosaurs.

Director and co-writer Colin Trevorrow (Safety Not Guaranteed) wanted to recapture the spirit of director Steven Spielberg’s original 1993 Jurassic Park film but also give it a contemporary spin. In the new movie, which stars Chris Pratt and Bryce Dallas Howard, the theme park tries to reverse declining attendance by creating something bigger and more spectacular: an entirely new species of incredibly vicious dinosaur called Indominus rex.

“It’s a hybrid of Tyrannosaurus rex and some raptor and they used other species to fill in the gene sequence,” says visual-effects supervisor Tim Alexander, whose previous credits include  Rango. “But the big reveal of the Indominus is that it’s part raptor.”

Indeed, the other raptors initially side with Indominus — until it goes astray.

Inevitably, the design process for Indominus rex was very long because of the creature’s uniqueness. The Indominus is larger and faster than the T. rex, measuring 40 feet by 20 feet and capable of running as fast as 30 mph. It not only has a fierce bite but also can pick up objects, which the T. Rex with its stumpy hands can’t do. Plus, it’s got a very hard skin, which makes it nearly bulletproof.

“We designed her head slightly smaller so she could primarily use her hands and tail,” Alexander says. “But it was important to make her a real dinosaur. They didn’t want people to worry about her looking like a strange mutation.”

Animation supervisor Glen McIntosh — no stranger to the franchise having been lead animator on 2001’s Jurassic Park III — and his crew analyzed the creature’s weight and movement at great length. Realistic animalistic behavior was important and the animators often used picture-in-picture comparisons while working.

And, as a result of advanced tech, there is a full skeletal and muscle structure underneath the skin of each dinosaur.

“As they step forward, you’re going to see muscles flexing, skin sliding,” Alexander says. “We’re doing extreme close-ups on eyeballs, mouths; and the detailing on the skin, the teeth and in the mouth is way beyond what we’ve done in the past. But obviously because it’s been 14 years since the last film, we had to rebuild them all. We had to decide how to change them or change them back to what the fans liked from the first film, because that’s what most people know.”

The four raptors have distinct colors, markings, behavior and even names — Blue, Charlie, Delta and Echo — because that’s how they were genetically encoded.

ILM used motion-capture on the four raptors because they’re more human size, so they were able to cast people to act out the movements and then applied the data to the animation. “That gave us a unique look to the raptors and then, on top of that, we did some key-frame animation for tails and actual foot plants on the ground,” Alexander says.

In addition to new rigs, along with new skin and muscles systems, ILM took advantage of HDRI lighting reference.

“For the Indominus rex, that’s important because she’s lighter in color — she’s somewhat albino,” Alexander says. “She reacts strongly to different lighting environments and so she takes on the color of the environment because she’s so neutral.”

ILM also created a virtual environment for the theme park Jurassic World, with Main Street and the lagoon in the center and the Mosasaurus and T. rex Arenas surrounding that.

They also designed a petting zoo, a water park, hotels with swimming pools, a golf course and a monorail system.

“In the past, putting interaction into plates has been a very difficult thing to do, so we repopulated it with plants and bushes and grass and smaller trees that Indominus rex could step on and break down and crush,” he says.

This occurs in an early sequence called “Asset Containment,” in which the Indominus rex escapes and, after being pursued, picks up a man and throws him into the water. It then picks up another man and chews him up.

For the final fight, ILM used a combination of special effects and CG for buildings getting destroyed, light posts going down, fires going off and raptors getting thrown around and burned up as the two big dinosaurs push each other into buildings.

“We actually shot quite a bit of destruction on set and then added more digitally later. It’s lot of cool mayhem,” Alexander says.