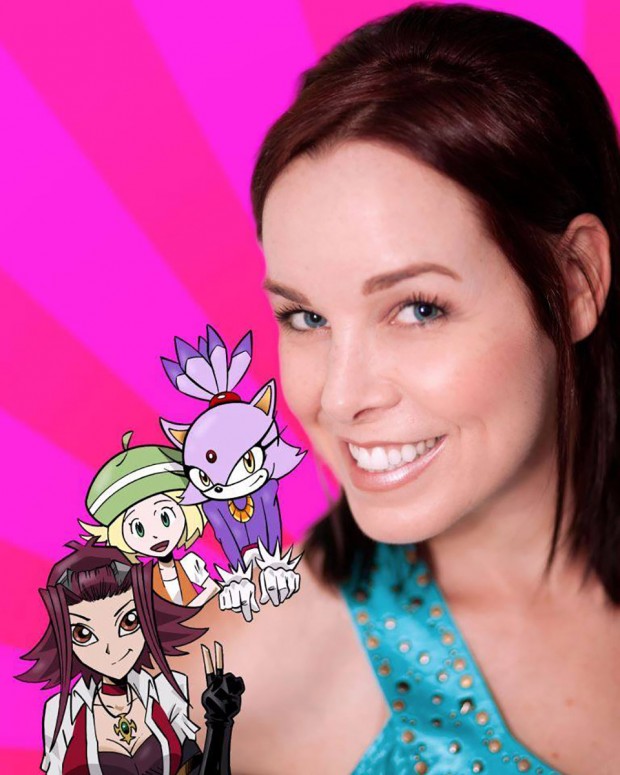 Voice actor Erica Schroeder discusses the benefits of a musical education and why quicker is often better. By Mark J. Lerner.

As a junior member of the Baboon team, I assisted on the set of a recent, to-be-announced European feature that the Baboon crew had done a comedy rewrite of, and for which Baboon’s Mike de Seve, was directing some of the voices.

I got a chance to speak to some of the actors behind the scenes about the voice process. One such actor was Erica Schroeder, from such legendary shows as Pokemon, Yu-Gi-Oh, One Piece, Winx Club and Teenage Mutant Ninja Turtles.

In my interview with her in the last issue of Animation Magazine, she talked about how to find the emotional believability in even the most cartoony character, drawing on such classically New York acting styles as Meisner.

But for the specific craft of animation voice acting, Schroeder looks to her technical training as well:

Schroeder received a bachelor’s of fine arts in acting from New York University with a concentration in musical theater, and she says these skills help her immensely, helping her understand the musicality of voice acting.

“If you ask any animation voice director what types of performers they prefer to work with, I’d say 99 percent would say singers, musical theater performers,” says Schroeder. Why? “Because we understand musical comedy. It’s very similar. It’s large. It’s a big type of performance.”

It’s this big, expressive style that Schroeder brings to the sound booth. “I was a ‘swing’ on Broadway in Jane Eyre, meaning I played eight different characters, and sometimes two or three of them were in the same show at almost the same time.” Jumping in and out of costumes, musical numbers, and personalities is the perfect preparation for the fast-paced efficiency that work in a sound booth demands, she says.

Talking to Schroeder, it became clear that there’s a precision and technicality that underlies that kind of expressiveness. Just as there must be a real emotional basis for every character, there’s also a technical basis: different character types have different vocal ranges, textures, and resonances. The technical precision that music training teaches helps the performer instinctively recognize what different pitches do for different roles, and how to control the resonance of your voice to hit those pitches.

The Need for Speed

Doing voices for a whole movie is a marathon— but that doesn’t mean a little sprinting can’t help. When I got to witness the actors work, on the rare occasion a performer was struggling in the booth, voice director Mike de Seve would often instruct them with the same piece of advice: “just give me three quick ones in a row,” meaning three spontaneous variations on the line.

It’s a deceptively simple technique, but it works on a few levels, it seemed. First, speed’s essential to comedy— audiences are more likely to laugh if they’re just keeping up with the characters than if they’re waiting for the characters to catch up with them. Second, the rapid delivery helps get actors out of their heads, especially if it’s a line that they’ve been mulling over or discussing for a while, since conflicting feedback among the various directors and producers, as well as internal deliberation, can build up and create a block to natural acting. And finally, doing multiple takes of the same line in succession encourages actors to vary their deliveries, giving directors a wide range of takes to choose from.

“I usually let the actor know what emotion the line is meant to convey, if they’re new to the scene, then let them interpret that,” says de Seve. “Then, if their performance feels close to what we were looking for, I offer a quick adjustment, and they try again. Usually that does the trick. If not, sometimes we just suggest they freestyle and see what comes out, other times we’ll even do microsurgery, just asking them to touch up a few words in the line, punch those in.”

Speaking to Schroeder in the studio, I got a sense of the many concerns voice actors have when fulfilling a role. They have to adapt their voices to convey sometimes dozens of different and often ridiculous characters, but stay emotionally real for each one. And to keep up with the rapid pace of recording, they have to be able to pull out a voice or emotion at the drop of the hat, do it right, and turn around to do something completely different.

It’s meticulous professionalism and studied expertise, as well as wild expressiveness and the ability to not take oneself too seriously, that help keep an actor grounded so they can deliver such vibrant, memorable performances.

Behind the Mic
Ask an Intern!