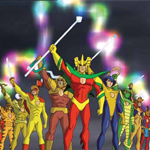 If you need to hear someone speak passionately about the changing paradigms in children’s entertainment and how the
multiplatform universe is revolutionizing the way we seek our content, you’ve got to get a hold of Peter Keefe. The seasoned children’s entertainment veteran who exec produced Voltron: Defender of the Universe in the ’80s, is exploring fresh ways to bring animated shows to mass audiences this fall.

Keefe’s Entertainment Group has teamed up with Animation Development Company, a dynamic financing and development outfit based in Los Angeles, Calif., to introduce his new concept and animated series called ZForce to the market. This clever boys action property focuses on a group of powerful superheroes whose special powers and alter-egos reflect their individual Chinese astrological sign.

“I believe that kids are really going to get excited by these superheroes because they can identify with their special animal zodiac signs,” explains Keefe. “This is a powerful mythology, and kids don’t have to role play because they already belong to one of these 12 zodiac signs. It’s different from pretending you’re Peter Parker or the Blue Power Ranger, because you really are a snake, a monkey, a horse or a dragon. Our superheroes harness the powers of their animal signs and so will the young viewers of the show!”

In addition to having fun with the characters and the crime-fighting powers of the team, Keefe says the creative team is including little nuggets of scientific facts in each episode. “This is very much in the Gene Roddenberry tradition—we are not going for mindless adventure here. We hope the show will teach young viewers interesting things about the world in a subtle way. At the end of the day, the message is that every child is special in this universe, because of who they are or who they can be.”

“We are big believers in family-friendly properties that parents feel safe about letting their kids get involved with,” says Ira Warren, the successful venture capitalist who formed Animation Development Company with business entrepreneur Howard Miller a few years ago. “Peter brought this property to us last year at MIPCOM Junior, and we recognized the show’s huge potential in the kids’ market. You have to realize that there is no shortage of cartoons produced for the international market out there,” he adds. “Last year, there were 1,143 animated projects presented at the MIPCOM Junior market in France. But there is a shortage of cartoons with longevity. What’s important to realize is that kids know exactly what they like and what they don’t warm up to. If they don’t like it, it won’t last. We think they are really going to get excited about this show and its colorful characters.”

As strong as the show’s concept may be, Keefe isn’t relying on traditional broadcast or cable outlets to spread the word on his property. This month, kids were able to see one-minute spots inviting them to check out the Z-Force universe at www.zforce.tv. Plans are in place to have these spots run 50 times a week on select children’s TV channels from 8 a.m. to 4 p.m. weekdays and 7 a.m to 5 p.m. on weekends.

“Historically, broadcasters have used the Internet to drive viewers to their broadcasts, but everyone is having difficulty monetizing the content on the Internet,” Keefe says. “You have to face it: TV has become the wallpaper, the background against which they play videogames or surf the net. What we’re trying to do is to invert the revolution
and show broadcasters how to monetize the web. So we’re buying time on TV through major kids ad buyer Beacon Media to spread the word on this property. You won’t be able to turn the TV on without seeing a Z-Force spot.”

Keefe believes that once he gets kids interested in the superheroes, it will be much easier to get TV buyers and programming executives jazzed about the show. “This show explores a mythology that has been around for 5,000 years, so we feel that kids will want to invest a lot in this group of superheroes. It’s something of a discovery quest—these powers, these signs become part of their lives and who they are. This is the way to go past the broadcasters and put the show directly in front of the kids!”

Directed by Kammon Song and exec produced by Paul Vitello, the 26 x half-hour traditional 2D/CG hybrid series is available for download as well as traditional premium package sales. There are also plans for a big merchandising
push that will include T-shirts, posters, zodiac amulets, trading cards and video games. “ZForce is not just a new cartoon, it’s a new lifestyle property,” adds Keefe. “It’s the happy-idea virus that kids will love to spread!” ■ 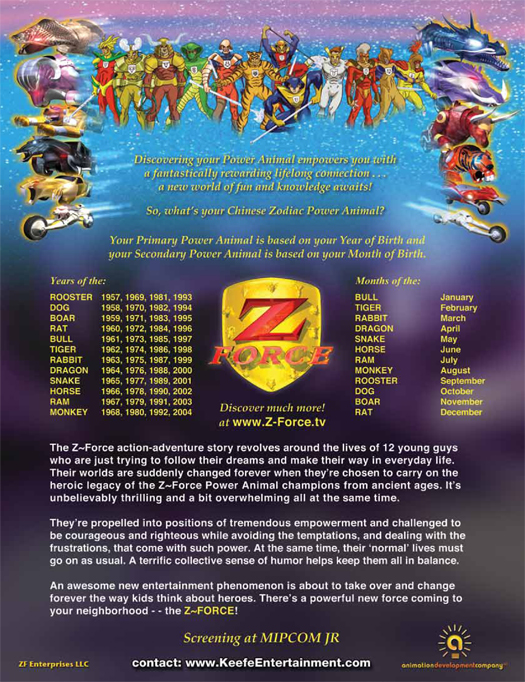 You may also like...
Related Topics:Action, Chinese, Ready, Zodiac