How will you get your start in the animation writing game? Last issue, we spoke to three of Baboon’s team of award-winning scribblers, who each got their break using one classic method: Not taking no for an answer.

This time, we bring you three more celebrated simians and their secrets of screenwriting success. Read on!

Jymn Magon, your Emmy-winning writing career started with a gig in college radio. Seems like a bit of a meandering path.

Jymn Magon (DuckTales, Winnie The Pooh): Yeah, but it did the trick. As a kid, I made 8mm movies, did stage plays, wrote skits and produced college radio shows. Just anything creative I could figure how to do. I didn’t know it, but all that self-training made me ready for when the door opened at long last.

It went like this: From college radio, I got a gig recording vinyl records for Disney, including Mickey Mouse Disco, which caught the eye of Disney president Michael Eisner. At the time, he was thinking of starting a TV animation division. So he invited me and a handful of miscellaneous creative types to his house one Sunday to talk about it.

With no experience in TV, I found myself developing a show for him based on the popular Gummi Bear candies. When NBC bought the series, they asked, “Who’s going to story edit?” My boss pointed to me. It was the old joke; “Two weeks ago, I couldn’t spell ‘story editor,’ and now I are one.” But if it wasn’t for making a lot of entertainment stuff as a kid, I can’t imagine I could have pulled it off.

So there’s a pinch of “right place, right time,” but some hard work beforehand made you ready, sounds like. Dave Benjoya, what was your approach to getting in the game?

Dave Benjoya (Rocket Monkeys, Angry Birds Toons): I always write what I’m interested in first. And I find collaboration has been a huge help in many ways. This is useful for letting you think out loud and having another set of ears, of course, but I also like to collaborate because it’s like joking around with my friends — what could be better? 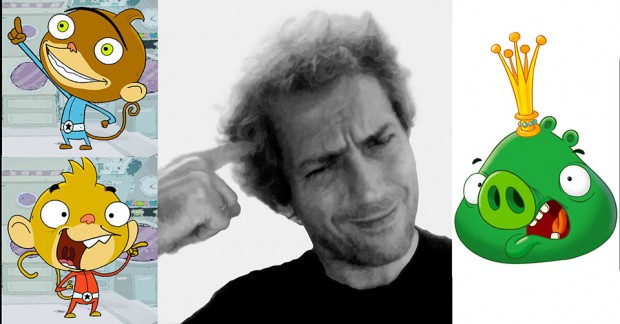 Just as important, if any of those writing buddies gets work or sells an idea, then we all stand to benefit. Because, as it’s happened on Rocket Monkeys and Angry Birds, those writers want to work with their favorite other writers, the ones that they’ve had the most fun together with, that they’ve gotten good results with. So you might get yourself in the door that way. And if not, hey, you had a great time coming up with some cartoons together.

So build your relationships, and keep making stuff. Joe Vitale, you had a problem that’s familiar to many — being in one part of the industry but wanting to move to another. How did you make that sideways leap?

Joe Vitale (Angry Birds Toons, Felix the Cat): I’d been working in feature animation at DreamWorks but on the production side. What I really wanted to do was write — but dump trucks full of Hollywood writing contracts were in short supply. So I decided to just make my own animated show for myself that would make me laugh. Problem was, I had no idea how.

What followed were a few years of self-taught stop-motion animation, experimenting, writing, recording and, finally, creating a web series. It got me a few animating gigs on commercials. Then, finally, when a story editor I knew saw my web stuff, I was hired to try some punch-up writing. And then more writing … and more … and I’ve been doing it ever since! So that’s my advice, kids: Make something.

So there you go, readers, three pearls of wisdom to help dress you for success:

1) You never know where one job will take you.

2) Keep your friends close and your co-collaborators closer.

3) And if you still can’t find a job, just go make your own damn cartoon!

Hey, it worked for these guys. See ya next issue!