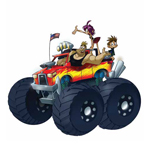 Created by Andy Dickman, who did storyboards and character designs for shows such as Loonatics Unleashed and Danger Rangers, the show centers on an average, single father named Chuck Ramsey who has to face the daily trials of life with his very capable 14-yearold daughter and his brainy 12-year-old son.

“We noticed that there are lots of shows out there that put the poor dads down,” says Konnie Kwak, the series’ well-regarded exec producer and president of Toonzone Studios, an animation house with offices in both L.A. and Vancouver. “We took a lot of care to portray the dad as an intelligent, caring figure. It’s just that sometimes he just doesn’t get it, like many parents in today’s world. Of course, he has to deal with the regular trials of family life, but on top of that, he has to fight evil and save the world!”

What sets the show apart from many of the toons on the drawing boards out there today is the fact that it’s fully funded, thanks to the efforts of Animation Development Company.

With co-producer Hawaii Film Partners (Ape Escape, Flight 29 Down) and distribution in the hands of Showcase Entertainment, the episodes are slated to be ready by late 2009.

“Personally, I consider it remarkable that we received such a fantastic response at last year’s MIPCOM Junior market,” says Ira Warren, ADC’s seasoned finance consultant. “There were over 1,100 shows submitted for viewing and we
came in number 13 of the most viewed shows by the many network executives. That’s fantastic considering that we were competing with such well-known, established major studio brands as Disney and Warner Bros.—we came in ahead of Batman and Garfield!”

Kwak, who has many years of experience producing TV animation, says the show would be perfect for primetime audiences. “Originally, we were planning for a younger audience, but after feedback from the networks that we are in touch with currently, there seems to be more of a demand for older family fare. “Since we are currently in production, we can work on the real dynamics between the characters, and reflect the changes that the networks are looking for in the next year. T h e r e f o r e , right now we are targeting the eight- to12-year-olds and their parents.”

“We have funding for 26 episodes, but we’re looking to find a top show runner and a new network partner in the near
future and we hope to debut the series in the fall of 2009,” she adds. “The budget for the show is $10 million, but the show is going to look like we produced it for 10 times that amount.”

Kwak and Warren are also working on another appealing toon that is generating early buzz internationally: Tiny Warriors is an action adventure series focusing on miniature-sized martial arts characters. Kwak says the fact that she’s a few months away from earning her black belt and is married to a martial artist certainly helps with the creative part of the toon. Warren points out that because of the show’s strong merchandising hook, many companies in both western and Asian territories have already expressed interest. “We have already been contacted by Chinese co-production partners, and that is a huge plus in the global marketplace right now because the Chinese government is making a big push for animation.”

Like many working in the field today, Kwak and Warren believe that although the current economic climate has impacted the business, there will always be a place for strong, quality animated shows.

“The market has certainly changed since a year ago, because of the credit crunch, and many investment bankers don’t know where the money is going to be next year,” says Kwak. “But we consider that to be a plus for us, because we’ve secured international funding. Investors feel nervous about putting their money in the stock market and in banks, so investing in an animation series with solid creative teams becomes a good option.”

Warren agrees. “I consider the children’s market to be recession-proof,” he says. “From an investor’s standpoint, children will always watch cartoons, even when mom and dad are wringing their hands as they look at their stock portfolio reports.”

What seems to be keeping Kwak and Warren optimistic about the future is the timeless appeal of quality TV shows for viewers all over the world. “The shows that we all love have a long shelf life,” concludes Kwak.
“It’s not about what’s hip and faddish in a year or two. You look at the classics like Tom and Jerry or Winnie the Pooh: They’ve been around for 40, 50 years. That’s what we’re aiming for with Action Dad. We hope people will stay in love with this family for a long, long time.” ■ 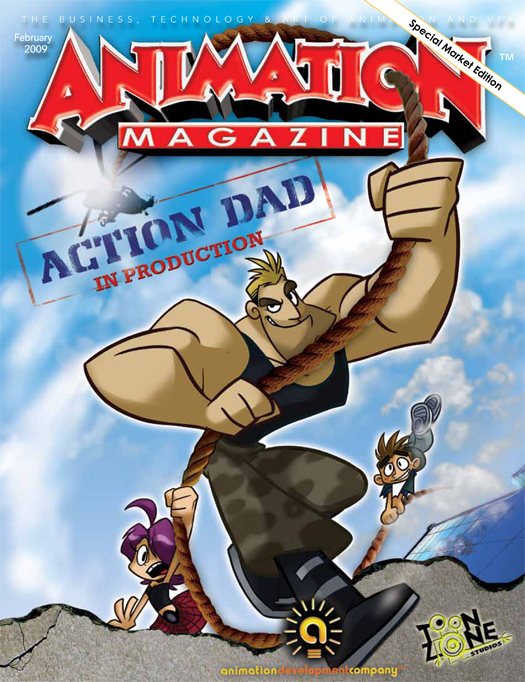 You may also like...
Related Topics:Action, Best, Father, Hero, Knows