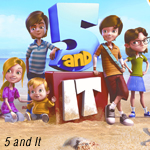 ZDF Enterprises and  DQ Entertainment have agreed to collaborate on a 3D stereoscopic HD TV series called  5 & It as part of a packaged, multimillion-euro deal signed in Hyderabad, India.

5 & It is a series of fantasy adventures for children aged 6 to 10 and is based on the famous book by Edith Nesbit. The story already has appeared in live-action cinema and TV in Europe.

ZDFE  will distribute the series, which is being produced at a global budget 9.2 million euros, and holds rights for 64 countries including Western and Eastern Europe, South America and Latin America.

5 & It follows the adventures and escapades of five children after they unearth and befriend an irritable sand fairy called a Psammead that  grants them a wish a day.

“ZDF Enterprises and DQE have partnered in other international projects and this association has grown in strength with immense synergy between the partners,” says Tapaas Chakravarti, CEO & chairman DQE. “We hope to work with them in many other quality productions in the future.”

“Our cooperation with DQE on The Jungle Book, Peter Pan and Lassie proves to be very effective,” says Fred Burcksen, VP of  sales, merchandising and coproductions at ZDF. “Being DQE’s partner again in 5 & It is only a natural next step in evolving this partnership and in ensuring that quality children programming is being produced and successfully being brought to broad audiences worldwide.”

Nintendo Unveils Wii U Console, Due Out in 2012
TV Movie, Bus Tour Kick Off ‘Phineas and Ferb’ Summer