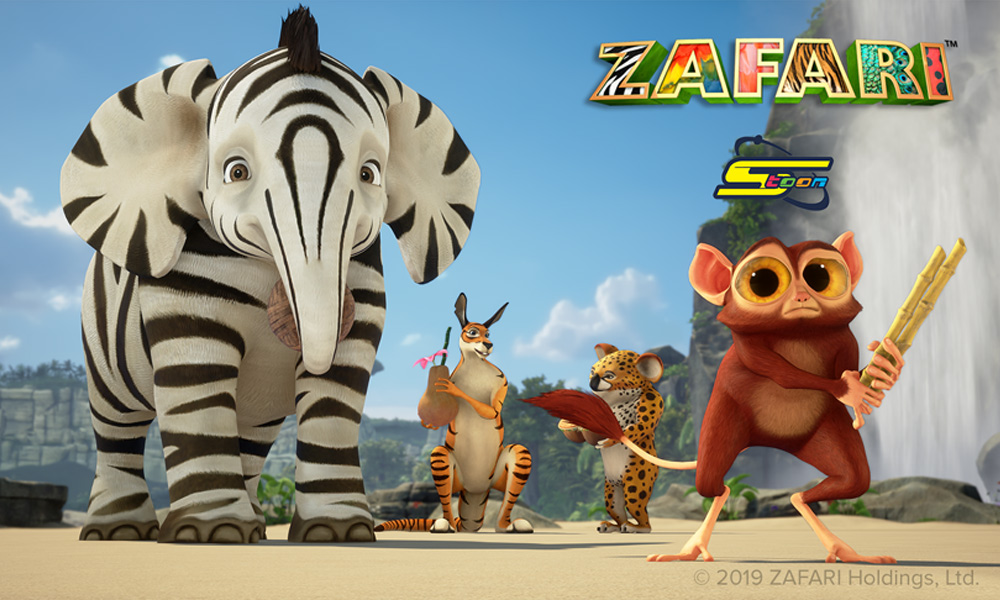 Spacetoon TV, the first dedicated kids’ channel in the MENA region, has brought a new animated series celebrating differences and promoting tolerance to its young viewers with the recent premiere of Zafari, from Ink Group and Montreal animation studio Digital Dimension.

The 11-minute CG series reinforces the values of friendship and accepting others in a humorous manner through creative storytelling and unique characters, including a baby elephant with zebra stripes, a lion with flamingo feathers and many more that were magically born in the skin of other animals. The team and executive producer and creator of the series, David Dozoretz, wholeheartedly supports the message of the story being that we should celebrate differences, as we are all unique.

The show is itself unique, being the first episodic animated series fully rendered in Unreal’s real-time game engine. Zafari has been recognized with “Best Animated Work of the Year” by the BroadcastProMe 2018 Awards, and “Best Use of Game Engine in TV Series” by Infinity Film Festival in Beverly Hills, 2018.

“We believe that this year is the perfect year to broadcast Zafari as we sensed a strong bond between the moral of the series and the theme of the year of tolerance in U.A.E. We’ve chosen to join the forces which promotes the nation’s vision of prosperity and stability in the region,” said Fayez Al Sabbagh, President of Spacetoon Group. “In Spacetoon, we take our responsibility in teaching children to transcend tolerance into a higher level which is the embracement of the unique difference in society, and there is no doubt that the cartoon is one of the powerful tools to deliver this message directly to children and plant the seeds of tolerance in their minds.”

Spacetoon is planning support activities for Zafari, ranging from live shows and toy production to huge marketing campaigns and cinema events. Due to the strong core message of the show, it has also received great support from FUNN Organization in Sharjah, one of Spacetoon’s partners, which presented the Middle East premiere of Zafari during The Sharjah International Children’s Film Festival 2018.

Finally, a partnership was made between The Ink Group and ALC – a subsidiary of GNAM, the parent company of Spacetoon — resulting in the establishment of the joint venture, Ink ALC, which owns the licensing rights to Zafari. GNAM has always considered co-production to be a part of its variety strategy to enrich the cartoon and animation industry in MENA with edutainment content that suits all children’s preferences.

Zafari airs Sundays and Tuesdays at 12:30 KSA on Spacetoon TV.