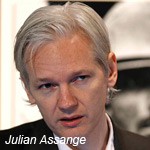 EW.com has leaked the hot news that the 500th episode of the The Simpsons will guest voice none other than WikiLeaks founder/editor-in-chief Julian Assange. The elusive Mr. Assange recorded a guest spot this past summer that will air as part of the Fox show’s landmark episode on Feb. 19.

Simpsons exec producer Al Jean told Entertainment Weekly that series creator Matt Groening heard a rumor that the activist who runs the whistle-blowing website was interested in guest-starring on the series, “so we asked our casting director Bonnie Pietila — who had been able to unearth Thomas Pynchon and got Tony Blair to do the show — to find Mr. Assange. And she did.” Assange, who is still under house arrest in the U.K., recorded his lines at a location unknown to Simpsons producers. Jean said he was just given a number to call and directed Assange remotely from Los Angeles!

In the 500th episode, Homer and Marge discover that the residents of Springfield are holding a secret town meeting to kick them out of Springfield for all of their shenanigans over the years. The Simpsons go off the grid to this very rugged place where they meet [Assange], who’s sort of their new Flanders, says Jean.

“[Assange] lives next door,” quips Jean. “The similarities end there… He invites them over for a home movie and it’s an Afghan wedding being bombed. He’s a controversial figure, and there’s a good reason he’s controversial,” says Jean. “There was discussion internally whether or not to have him on the show, but ultimately we went ahead and did it. There nothing we did that has anything to do with the legal situation that he’s in…We wanted to make sure it was satirical, and he was willing to do that.” 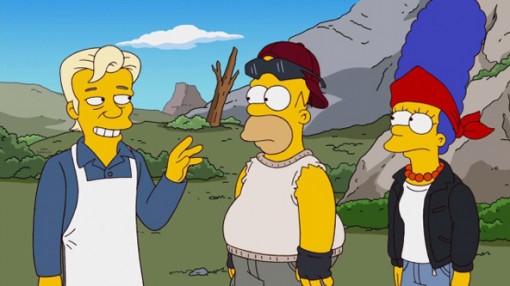