Die-hard animation fans who have been watching cool shows such as Metalocalypse, Megas XLR and MTV Downtown have known about the talent and creativity of Chris Prynoski for many years. In April, more audiences can jump on the Prynoski bandwagon when his new toon Motorcity premieres on Disney XD.

The action–packed series is set in a futuristic Detroit after it has been bought and transformed into “Detroit Deluxe” by a nasty billionaire named Abraham Kane. The wealthy tyrant’s plans to ban cars and cut down on personal freedoms are resisted by a band of rebels known as The Burners, led by 17-year-old Michael Chilton (voiced by Reid Scott). The voice cast also includes Nate Torrence, Kel Mitchell, Jess Harnell, Brian Doyle Murray, Jim Breuer, Mark Hamill and Dee Snider (yup, that’s the lead singer for metal band Twisted Sister!). 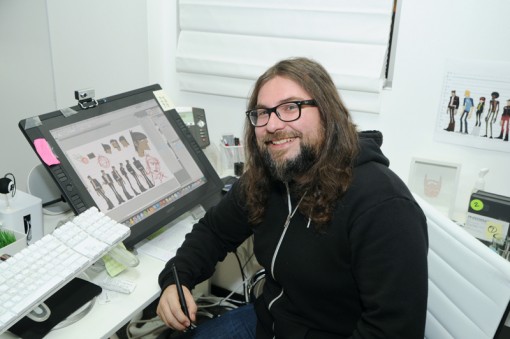 The idea for the show goes all the way back to the early 1990s, when Prynoski was working at MTV.

“I came up with the idea in 1991 and even made a trailer for it,” he recalls. “I showed it to [development exec] Eric Coleman who was at Nickelodeon at the time, and he loved it. When he got his gig at Disney, he asked me whether I still had that show about future cars. It was a long process, but that’s how we eventually got the show made for Disney XD.”

“I loved shows like Dukes of Hazard and going to car shows with my dad,” he says. “I was a big fan of action-packed shows and really loved Star Wars, so I guess you can say that Motorcity was inspired by all of those things in a way.” 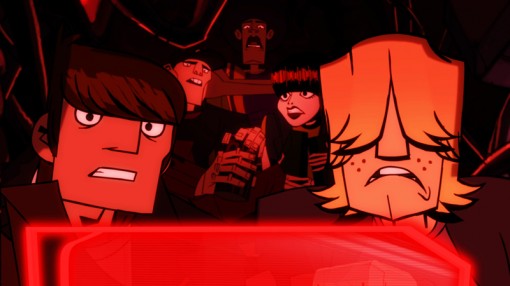 One of the unique aspects of the show is that it’s mostly produced in-house at Titmouse, with additional CG work provided by Nepal-based studio Incessant Rain.

“The L.A. studio does almost all the production work,” says Prynoski. “The team at Incessant Rain does a great job. What I love about the studio is that the guy who runs the studio—Kiran Joshi—worked on Disney features such as Aladdin and Beauty and the Beast. We use a combination of different techniques at our studio: We have the proprietary software that allows us to use Flash. What I like about the software is that it’s malleable, it provides the basic framework, and you can write scripts and dabble around to get Flash to do anything you want it to do.”

It’s interesting to learn that Titmouse actually began as a side project for Prynoski.

“I was working at Nickelodeon and Cartoon Network at the time and thought it would be fun to have a company that did T-shirts on the side,” he recalls. “Eventually, I found myself doing more animation work, and hired a guy here and there, and soon, we had a studio running.” 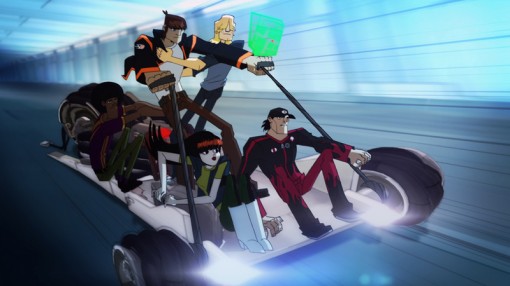 Prynoski says one of the bigger challenges of the toon was coming up with a design crew that could handle its particular demands.

“Motorcity is a little different from the rest of the stuff that’s on TV right now…and I think we’re lucky that the studio is in such ship-shape right now. We have in the neighborhood of 80 people working on the shows, and we have the best crew and artists for the series. In a sense, this is the kind of show that you could find in Europe or Japan. Our fantastic art director Antonio Canobbio is French. Juno Lee is our other director and he should really be directing every episode. He really comes from that culture. We have a really nice internationally mixed crew. We didn’t go to the usual suspects and that’s why it’s been such a great ride.”

In addition to Motorcity, Titmouse is also working on seven animated shows and various other short form projects. In addition to another upcoming comedy series for Disney, Titmouse is jamming on the fourth season of Metalocalypse, the third season of Superjail! and fifth season of Venture Bros. for Adult Swim. The studio recently finished production on the first season of China, IL, and is also animating Adult Swim’s much-anticipated show Black Dynamite.

Obviously this abundance of top-notch fare has given Prynoski plenty of reasons to love his job. 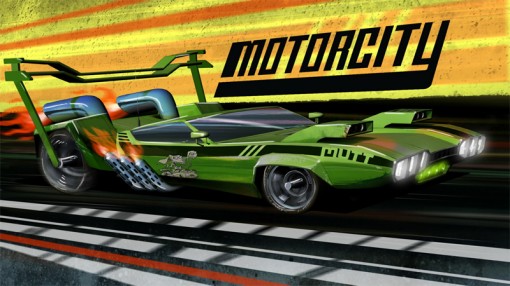 “In this business, you don’t always get to work on the projects that you want to,” he admits “Yes, it’s all about making cartoons, but some jobs are more fun than others. Right now, I can easily say that I’m super psyched to be working on every show that we have at the studio.”