VIZ Media has picked up digital, broadcast, home media and master merchandising rights to the latest installment in everyone’s favorite ninja anime franchise, Boruto: Naruto Next Generations. VIZ will be bringing the much anticipated new series to the North and Latin American markets swiftly, with the first episode to premiere with a Japan-US simulcast on Hulu, beginning April 5. New episodes will continue to premiere Wednesdays.

Hulu subscribers will also be able to catch up on the entire Naruto Shippuden collection ahead of the new series’ premiere, available now at hulu.com/naruto-shippuden. Episodes of Boruto will become available for streaming on its own dedicated page, hulu.com/boruto.

The latest action-packed installment of the smash-hit anime series, Boruto: Naruto Next Generations focuses on the adventures of the son of the celebrated ninja. As the series opens, the life of the shinobi is beginning to change. Boruto Uzumaki, son of Seventh Hokage Naruto Uzumaki, has enrolled in the Ninja Academy to learn the ways of the ninja. Now, as a series of mysterious events unfolds, Boruto’s story is about to begin!

VIZ is planning an English dub for the series featuring the talented cast highlighted in Boruto: Naruto the Movie, including Amanda Miller in the lead role of Boruto, Cherami Leigh as Sarada, the daughter of Sasuke from the original Naruto series, and Robbie Daymond as the mysterious “synthetic human” shinobi, Mitsuki. The series animation is produced by Japan’s Pierrot studio.

The anime series announcement comes just as VIZ is preparing the home video release of Boruto: Naruto the Movie and the Next Generations manga.

The movie (trailer here) will arrive March 28 on Blu-ray/DVD combo and standard DVD editions. Naruto creator Masashi Kishimoto drafted the screenplay and character designs for Boruto: Naruto the Movie, and served as executive producer. In it, Naruto has achieved his dream of becoming Hokage of the Hidden Leaf Village, and now has a troublesome son, Boruto, who resents that his father’s responsibilities prevents him from spending time with him. Sasuke, now with a family of his own, takes Boruto under his wing, while his only daughter, Sarada, dreams of being Hokage one day. As the new Chunin Exams dawn though, evil is upon the horizon!

The Boruto: Naruto Next Generations manga series will launch in print and digital editions on April 4. 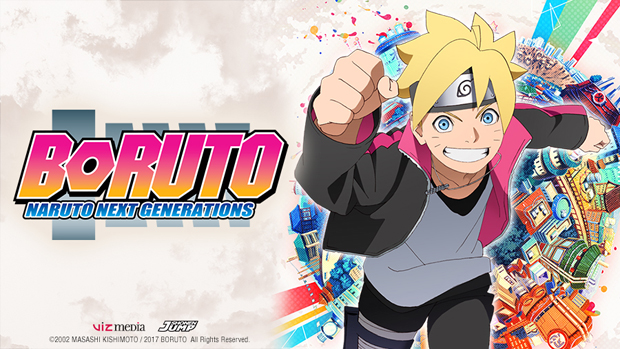