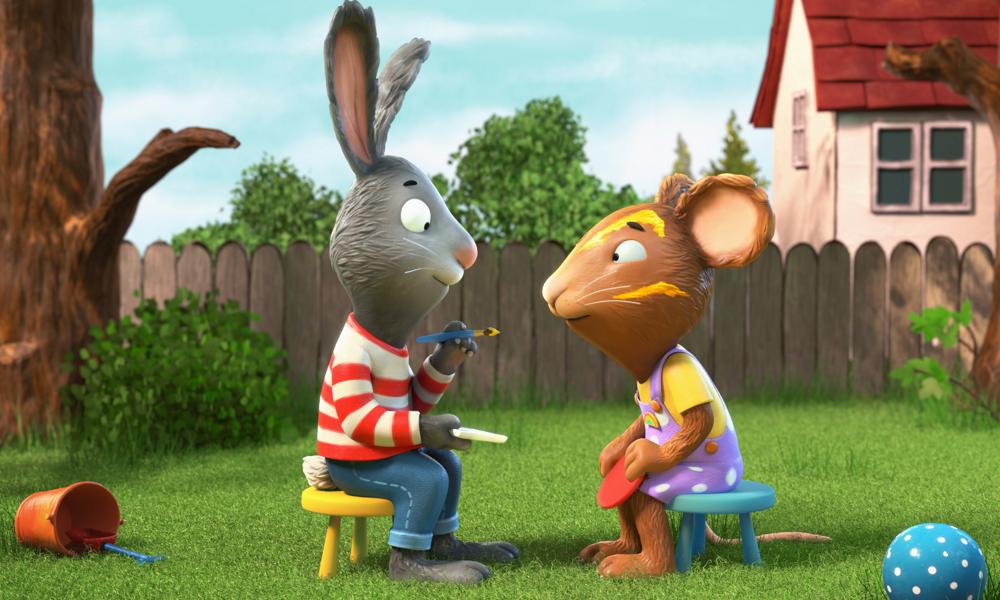 ViacomCBS and Sky announced their first co-production partnership on Wednesday, teaming up for preschool CG animated series Pip and Posy (52 x 7′). The show will premiere exclusively on Channel 5’s free-to-air strand Milkshake! and Sky’s on-demand service Sky Kids in the U.K. Multiple Oscar-nominated Magic Light Pictures (The Gruffalo, Room on the Broom, Revolting Rhymes and recent hit The Snail and The Whale) is producing, with animation services provided by Blue Zoo.

Pip and Posy follows a mouse and a rabbit whose lives revolve around a wonderful world of play. Packed with warmth and humor, the series is a joyful celebration of their great friendship, its laughter and games, its ups and downs. The series deals with emotions, resilience and feelings in a relatable way for preschoolers to learn about themselves, all centred on creative play from a child’s point of view.

Currently in production, the series is based on characters from Nosy Crow’s popular collection of story books by multi award-winning illustrator Axel Scheffler and author Camilla Reid. Pip and Posy is Magic Light’s first ever preschool series and sees the continuation of the production company’s 13 year association with Scheffler, which has produced seven high-profile animated specials based on his hugely successful book collaborations with author Julia Donaldson.

Pip and Posy will premiere on Milkshake! and be available on demand on Sky Kids in early 2021. It will then also air on Nick Jr. a year later.

“Pip and Posy is a delightful animation series that captures the essence of how young children play, think and feel, and fits perfectly with our portfolio of educational and fun programming. The series teaches preschoolers the importance of friendship and societal wellbeing through imaginative storytelling and creative play,” said Louise Bucknole, VP Programming Kids, ViacomCBS Networks U.K. “We have a long-running and close relationship with Sky, so it’s very exciting to have commissioned our first co-production together, enabling us to bring the very best of British animation to Milkshake! from world class producers Magic Light Pictures.”

Lucy Murphy, Director of Kids at Sky U.K. & Ireland, said, “Pip and Posy is a playful series that will be loved by young children and their families. This addition to Sky Kids, plus our recent raft of original commissions, demonstrates our ambition to feature a range of premium British programming for under-twelves. We bring our customers the very best kids TV alongside our partner channels and this co-production with Milkshake! evolves our close relationship with ViacomCBS.”

“We’re really excited to be producing our first-ever preschool series and proud to be working with Milkshake! and Sky,” said Michael Rose, co-founder of Magic Light Pictures. “Axel Scheffler creates truly enchanting worlds and we can’t wait for viewers to join Pip and Posy for their fun and adventures.”

Pip and Posy has been jointly commissioned by Bucknole for Milkshake! and Murphy for Sky Kids with the participation of ZDF, Germany. The series is executive produced by Michael Rose and Martin Pope and produced by Vici King for Magic Light Pictures. The showrunner at Magic Light is Jeroen Jaspaert (Stick Man, The Highway Rat) and Blue Zoo’s director is Matthew Tea.

Magic Light Pictures holds the global distribution and merchandising rights to Pip and Posy (excluding publishing) and is developing a full licensing program to complement the new series.

Last year, Milkshake! pledged to double its content investment, which will lead to 50 new U.K.-originated hours per year from 2021.

Sky Kids offers families 11 kids’ channels and over 5,000 episodes of on-demand viewing as well as the Sky Kids app, a safe space for younger kids focussed content, games and art tools with parental controls including a sleep mode so parents can moderate screen time. This is complemented by the pin protected Safe Mode on Sky Q, so there’s no danger of children straying into any areas of content that are not right for them.