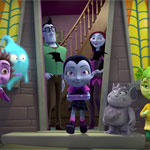 The new, cutely blood-curdling kids’ show Vampirina has been slated for its broadcast premiere on Sunday, October 1 at 11 a.m. ET, with two back-to-back episodes simulcast on Disney Channel and Disney Junior. The opening adventures will also be available on Disney Junior’s VOD and YouTube platforms as well as the DisneyNOW app. New episodes will roll out every Monday and Friday on the channels through October.

To make the most of its monstrous debut, special screenings of Vampirina will take place at theaters across the US on Sat., Oct. 21; Thurs., Oct. 26; and Sat., Oct. 28 as part of Disney Junior at the Movies – HalloVeen Party!, presented by Fathom Events. The cinema events will include a never-before-seen Vampirina episode, costume party for kids and families, and other festive surprises. Tickets go on sale Sept. 22 through FathomEvents.com/DisneyJunior.

Set in a Pennsylvania neighborhood, the series stars Lauren Graham, James Van Der Beek and Isabella Crovetti as the Hauntley family; friendly vampires who have recently moved from their home in Transylvania. The stories follow Vampirina (aka “Vee”) as she faces the joys and trials of being the new kid in town including making friends and attending a new school in the human world. Along the way, Vee learns that it may be easier to blend in with her peers, but it’s more valuable to celebrate the qualities that make each individual unique.

Inspired by the popular Vampirina Ballerina books by author Anne Marie Pace and illustrator LeUyen Pham (Disney Publishing), the series is made by the creative team behind Doc McStuffins, including creator/EP Chris Nee and co-EP Norton Virgien. Nicky Phelan (Octonauts) is director. Vampirina is produced by Brown Bag Films in association with Disney Junior. 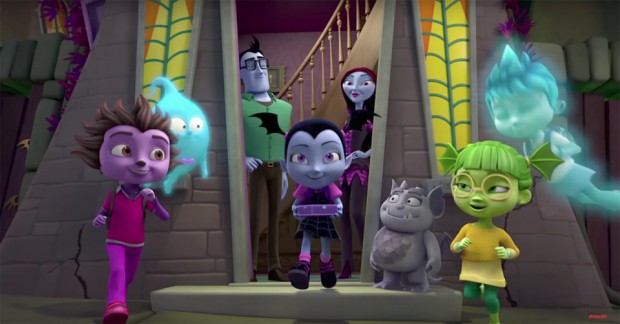