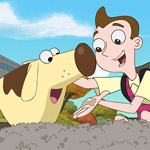 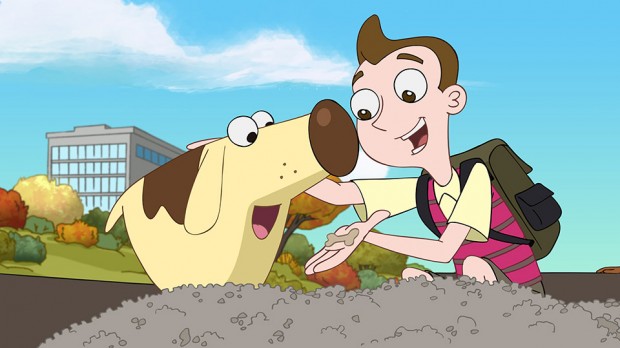 Milo Murphy’s Law is that rare show that dares to delve into a place many find frightening and terrifying – the heart of optimism. Milo Murphy, the show’s namesake, is the kind of guy who won’t be stopped by anything and won’t let his own upbeat attitude be dimmed by the goings on of the world around him. Even when the show’s creators take him to a place of ridiculous catastrophe, he still keeps his head up.

Premiering Oct. 3 on Disney XD, the show is the brainchild of Dan Povenmire and Jeff “Swampy” Marsh, co-creators of the beloved and long-running Disney series Phineas and Ferb. Povenmire notes that the pair are apparently getting much better at selling shows since it took him years to sell Phineas and Ferb to a network but just around three to four months to get Milo Murphy’s Law off the ground. And that came after the duo pretty much outlined the show in one meeting together.

“Basically, it feels like a companion piece what we’ve done on Phineas,” says Povenmire. “Milo is resourceful, empathetic and doesn’t let anything stop him and there’s something about that which is really touching and connects with people, I think.”

Povenmire and Marsh both come to this show after working on multiple hits in animation. Povenmire is a veteran of The Simpsons and Family Guy. Marsh is also an alumnus of The Simpsons as well as King of the Hill. Each episode of the show will run two 11-minute cartoons.

We should also mention Milo Murphy is the descendant of a famous someone. He’s related to Edward A. Murphy Jr., none other than the Murphy from “Murphy’s Law,” which plainly proclaims that anything that can go wrong will indeed go wrong. Milo is born with Extreme Hereditary Murphy’s Law, a condition that has been inherited from one family member to the next for generations.

Each episode will be grounded in this idea, says Povenmire. But that means they’ll also have to be clever about just how much craziness they throw at their main character and their audience. Too much of it in too realistic a style and it could easily run off the rails.

“It has to be more cartoony than real, more ridiculous than believable,” says Povenmire. “That’s were the tone of this show is.”

The title sequence shows Milo averting disasters ranging from a herd of stampeding llamas to fires by simply averting them at the last minute. And he’s always smiling, no matter what’s falling apart around him. “Weird Al” Yankovic sings the opening song as his character is nearly crushed by a falling toilet or run over by a rolling wrecking ball.

“We have an episode where a boat is sucked into midair,” says co-creator Marsh. “And that’s the kind of action we want, where it doesn’t seem like it’s actually something that could happen, except on this show, because that’s what happens on this show and it shows you how determined Milo is even when these things happen to him.”

The show landed a solid group of performers to voice their characters. Yankovic plays title character Milo Murphy, Christian Slater voices a glorified crossing guard and Vanessa Williams is featured as Eileen Underwood, the mother of Milo’s good friend. Sabrina Carpenter, a rising Disney star from the show Girl Meets World is the voice of Melissa Chase. The quality of the cast instantly expanded what the creators could do.

“‘Weird Al’ is genuinely musically talented and, even though we always imagined this show would have songs, having someone there who is also musically gifted helps because he brings that into every situation,” says Povenmire. “We auditioned hundreds of people for this role and ‘Weird Al’ just had it.”

Slater came on board quickly when he found out Povenmire and Marsh were putting together this show. As a fan of their work, Slater just wanted to be part of the project and was willing to take any part offered to him. Povenmire decided to write the part of a crossing guard — Milo’s foe — specifically for the actor.

Povenmire and Marsh come to this project with tremendous respect for the kids who watch their shows. They aim to write the kinds of jokes that don’t underestimate them. Marsh hopes the audience for the show will be “pretty much everybody,” because the show’s humor will operate on many levels, hopefully having something to offer to kids as well as the parents and caregivers watching with them.

“We’re always surprised by how much of the humor and the jokes that the kids get and we don’t want to back away from ideas just because someone says the jokes are too smart for the kids,” says Povenmire. “When people watched ‘Looney Tunes’ maybe your older sister or your mom got a joke you didn’t get and then you asked them about it, why it was funny, and then you understood something more after that.”

The show also reflects a classic style of animation, the kind of simple lines that have been used in Phineas and Ferb and that suits the creators because they’d like to keep focus on Milo’s attitude and the message behind it. Milo’s over-the-top optimism is matched with the same kind of broad lines and style in the visuals. It also makes the huge level of destruction on the show less serious. Photorealistic animation of things crashing into each other is not what the show’s creators are after here because “you want a sense that it’s not a real tragedy,” says Povenmire.

“Some of the kids online were talking about our show and they were saying that it looked a lot like Phineas and Ferb and then they realized that it’s because it’s from the guys who made that show, so now there’s excitement about it,” says Povenmire. “We’re happy to have kids who want to see what we’re doing.”