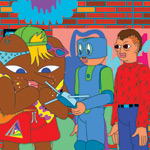 It’s been an interesting ride for Ben Jones, the artist behind Cartoon Network’s colorful and quirky new 2D series, Problem Solverz. One that has taken him from the East Coast and the world of underground art, to the burgeoning webtoons universe and finally the palm-lined streets of southern California and the bustling (if not frantic) pace of TV animation. And he’s had a very special buddy along the whole way: his junk-food craving creature known as Alfe.

“I like to say he’s half dog, half man and half anteater,” Jones says of the oddball character, “You’re kind of expected to see this eight-foot, furry monster and take it at face value. That’s what I love about Alfe. I want anyone to see him and in the first three seconds get what he’s about and what the show’s about—what is he, what is he doing there, what is this world. It’s a good entry point to the show.” 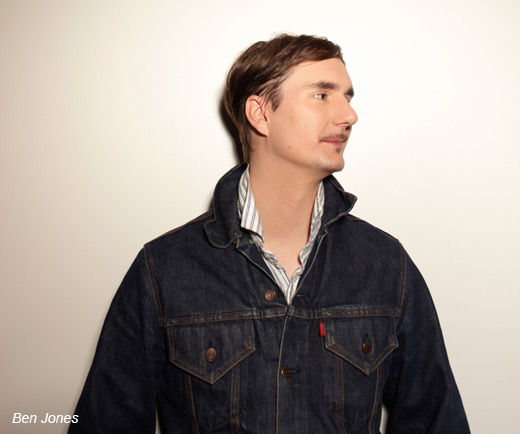 What he is is part of the trio of housemates-slash-business partners that drive the show, which also includes Roba and Horace. What they are doing is solving problems (like a rogue rollercoaster disrupting the space-time continuum), then solving the problems they’ve created in the course of solving problems (unleashing dinosaurs on the town in the quest for perpetual pizza). And their world is something never before witnessed on the small screen without the aid of potent hallucinogens.

Jones has had a keen interest in comics and animation from a young age. (One of the show’s characters, Tux Dog, is a creation from his elementary school days.) But it wasn’t until he was a student at the Massachusetts College of Art that his dream began to take shape. 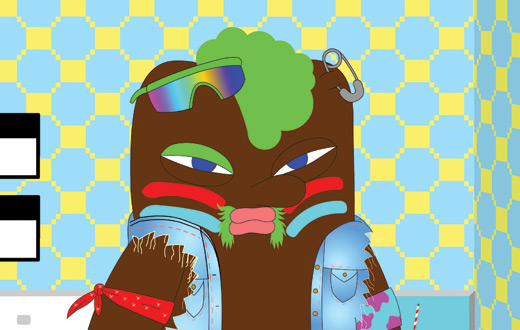 “I went to art school, where I started to do ‘art,’ but at the same time I wanted to do a project with more opportunities, or a more simple project I could do different things with. A project that could lend itself to a comic or web animation. That’s where the idea of Alfe came from,” he explains. Jones began producing comics and animations featuring his pet characters, and hitched up with Pittsburgh/Providence-based transmedia art collective Paper Rad. The next step came with a pitch for a related cartoon pilot called Neon Knome to [adult swim]. The late night kingpins vouched for the show, and asked Jones if he could pitch something to Cartoon Network in Burbank. “I was like, bottom line, is Alfe still in it?” Jones recalls.

He was, and is, and Problem Solverz is his new home.

The most immediately noticeable facet of the show is Jones’ unique character and background designs. The colors are electric, the city a vibrant hodgepodge of shapes and hues and its populace an eclectic blend of critters and humanoids, many with funky retro style influenced by pop culture, music and videogames. All a reflection of what the artist calls the “new visual language” of TV animation. 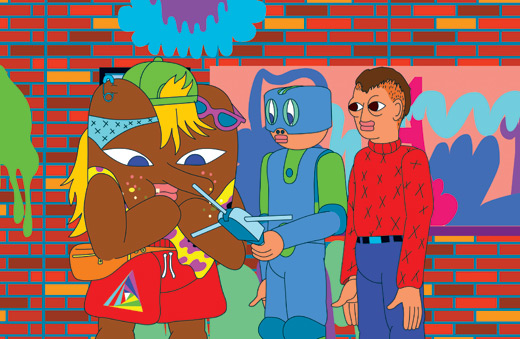 “I would like to say that both Adventure Time and Regular Show have the same language and context as my show, so they’re similar. Then again, these three look drastically different from other shows on TV. There is a whole new visual language that is fresh and better and updated and about time to happen,” Jones elaborates. “Whereas Adventure Time is exploring the fantasy aspects of that language with the characters and sets, I’m taking this new language and exploring a bit more of the cultural side—fashion, music, skateboards … This happens every 10 years, the language of art and illustration and the visual slang of our culture changes.

“I don’t think it’s going to happen, it’s happening. The stuff I was doing in college is now in Urban Outfitters!”

Done in a Flash

As Jones tells it, his Alfe project(s) first came alive when Flash animation software hit the market. Though Flash has since proved a powerful digital 2D solution for web, mobile and TV series, the creator believes Problem Solverz is the first show to utilize the software seamlessly. 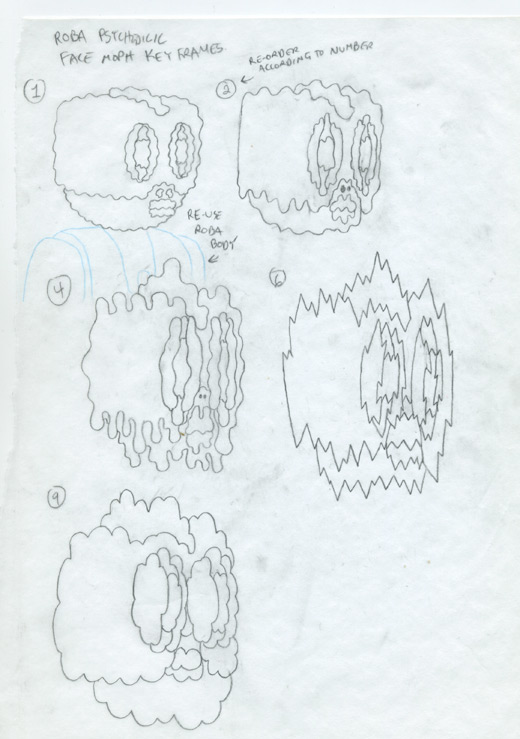 “The idea and the art and the computer are one whole process,” according to Jones, “Flash is now as natural as a pencil … We’re not translating our ideas to Flash, we have Flash open on our computers and big Wacom tablets. We’re drawing right into Flash, coloring in Flash, animating in Flash.”

Jones gives credit to digital 2D veteran Eric Pringle (Foster’s Home for Imaginary Friends, ¡Mucha Lucha!) for guiding this all tech process. Many of Pringle’s Foster’s compatriots are now members of small in-house team Jones estimates at less than 15 full-timers charged with crafting this new toon world. Their familiarity with the feats and foibles that come with working in Flash have helped Jones achieve the proper effect.

“This is a great project for [Pringle] and all the other animators because it’s the first animation that doesn’t fight with the digital process, but actually just plays to its strengths,” he notes, “And there, I think, you see how the show does look crazy, but to me it looks like a celebration of what’s possible with computer graphics.”

Like most TV toons, Jones says the most time-consuming aspect is coming up with the off-kilter adventures his unlikely heroes will embark on in each episode. While the story and scripting phase can take months and months, the animation team can crank out each episode in a matter of weeks—thanks largely to their direct-to-digital production model. A process Jones has found highly rewarding.

“The one thing I don’t do—because I do everything, literally—is any of the animation. So when I see the animation come back—I don’t have kids yet, but it’s like seeing little baby Alfes come out of the Mother Alfe computer-womb-server. I don’t think I’ll ever be able to experience anything as pleasurable and fantastic and amazing and awe inspiring. It’s because all the animators are amazing and because the show is logical for them to work on; we’re not sending it to Korea and going, ‘What the?!’ … I think the show has really great what can be considered hard, traditional American animation.” 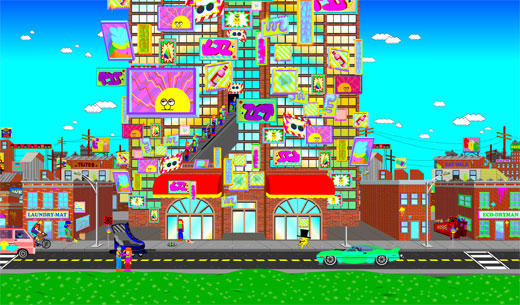 From Drawing Board to Broadcast

Despite the fun of seeing his long-time cartoon companions being realized in a whole new way, Jones admits TV animation is his toughest challenge as an artist yet. He describes the feeling of striving through 14-hour days as being like Lance Armstrong on the Tour de France. Which segues into his advice for other aspiring cartoon creators:

“You gotta train yourself to be the best artist. You need to train yourself to compete at the highest level. It’s not even a joke; you can’t feel bad about yourself,” he cautions. “Olympic athletes don’t have weird hang ups about stuff! They go to the gym every day. They’re aware of all the techniques; what’s happening, who their competitors are. Maybe they do have hang ups, but they’re also very positive … Any success that happens around here is just us doing our best and being really positive and working hard. Believing in yourself, that’s the main thing.

“Then after it’s all over, after a hard day’s work—you can have some French fries.”

While Jones, a recent transplant to L.A., works his way down the Top 10 French Fries list, and gets to work figuring out how to order customized Alfe pizza boxes for the series wrap party (SoCal rap groups are welcome to send their demos for the gig), he’ll always have his mind on what new twisted problems will need to be solved.

The Problem Solverz debuts on Cartoon Network on April 4.