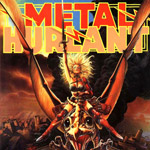 Universal Pictures Germany has acquired home video and VOD rights to French sci-fi TV series Metal Hurlant Chronicles. According to Variety, the deal which was made with The Licensing Machine, the licensing arm of the Panini Group, includes rights for Germany and German-speaking Europe for the first two seasons of the show. The first season of the show will comprise six half-hour episodes produced in HD and will be followed by a second season in the same format.

Based on the French sci-fi and fantasy comics anthology, which was published in the U.S. as Heavy Metal, Metal Hurlant Chronicles is directed by Guillaume Lubrano and produced by French DVD house We Prods. and publisher Les Humanoides Associes. Created by comic artists Jean Giraud (a.k.a. Moebius) and Philippe Druillet in 1974, the magazine was a popular sci-fi phenomena in the 1980s and inspired the 1981 animated feature Heavy Metal as well. A new anthology feature based on the title has also been in development over the past few years, with director David Fincher attached.

MacFarlane to Reboot ‘The Flintstones’
Crater’s CTP 2.0 Hits the Market