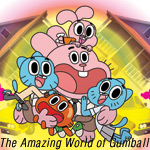 The Amazing World of Gumball, the first U.K.-produced full-length animated series to emerge from Cartoon Network Development Studio Europe, is set to premiere in the United States on the network May 9 at 7:30 p.m. ET/PT.

The series combines 2D and 3D animation in a live-action setting and follows the misadventures of 12-year-old Gumball and his family in the wonderful little town of Elmore. The series joins the channel’s Monday night animated comedy line-up of network hits including Adventure Time, MAD and Regular Show. The series will launch in other countries, including the U.K., in fourth quarter 2011.

The series is created by Ben Bocquelet and directed by Mic Graves.

The next wave of guests, panels and can't-miss programming for this year’s Virtual Crunchyroll Expo ...