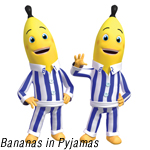 Turner Broadcasting has announced it will rollout its U.K. preschool channel Cartoonito across Europe, the Middle East and Africa, increasing the brand’s distribution to 125 million homes in 112 territories.

Cartoonito launched in the U.K. in May 2007 and since its debut has become the U.K.’s most widely distributed pay TV preschool channel, airing a raft of popular preschool programming including Fireman Sam, Baby Looney Tunes and the Care Bears.

Cartoonito will roll out across a number of EMEA territories as a branded block on Boomerang in September of this year, and is set to become a destination for preschoolers aged 3-6  and their parents. In Turkey and the Middle East, the Cartoonito block will broadcast on Cartoon Network.

Launching with a slate of strong and varied content, Turner Broadcasting has picked up the new series of Bananas in Pyjamas as one of its flagship debut shows. Produced by Southern Star Entertainment/Southern Star Singapore (a division of Endemol Group) in association with the Australian Broadcasting Corporation, the well-known series has a much-loved heritage and a quirky feel that will fit aptly with the channel’s vibrant and imaginative brand attributes. Bananas in Pyjamas is one of a number of high profile deal signings by the broadcaster.

Also forming part of the debut line up will be Jelly Jamm, an exciting new 3D animated series, co-produced by Spanish indies Vodka Capital, 737 Shaker and RTVE (Radio Television Española). A number of additional pan-EMEA preschool series are expected to be unveiled for 2012 in the coming months.

“We’re incredibly excited to be making such a big splash in the preschool market, with a full scale rollout of Cartoonito across EMEA,” said Michael Carrington, chief content officer, Turner Broadcasting. “Whilst Controller of CBeebies, I’d always admired Cartoonito from afar, and having the opportunity to extend this wonderful preschool brand across EMEA was one I couldn’t resist. Building on the success of the UK channel, and with two fantastic launch shows at the helm – Bananas in Pyjamas and Jelly Jamm – Cartoonito is set to delight audiences across EMEA as a hub of fun, funny and imaginative entertainment for preschoolers and their parents.”