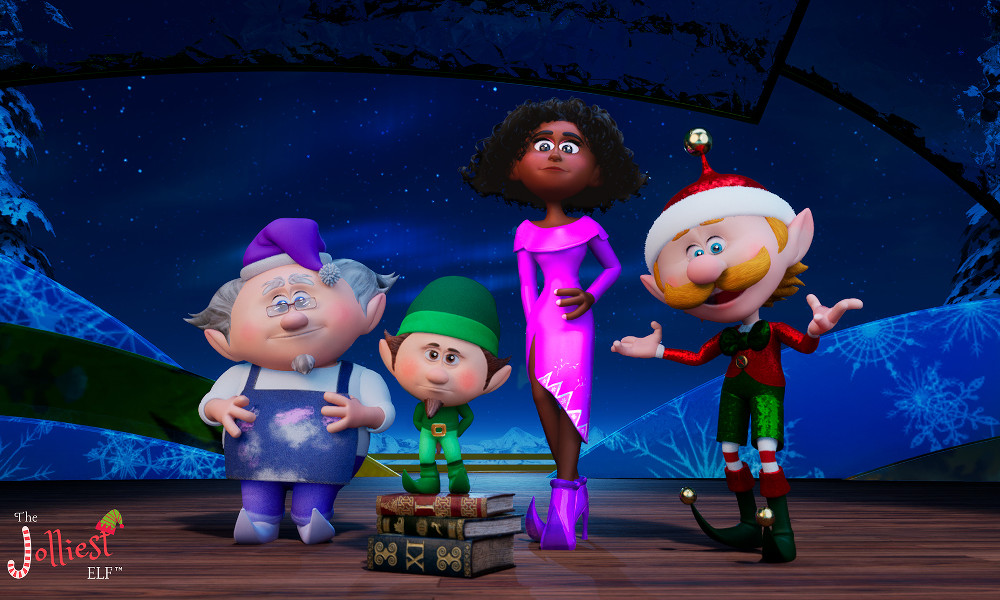 The series offers a fresh holiday special concept for families as well as a new production technique. The 12 x 7′ episodes are being created using real-time animation powered by Epic Games’ Unreal Engine. This new animation technique using real-time game engine technology has the potential to bring more interactive animated content to market faster than ever before. Atlanta-based animation studio TRICK 3D, helmed by Director Chad Eikhoff, has been developing a new real-time animation pipeline over the past five years.

“I am extremely excited to be using real-time animation to share some of the North Pole’s finest talent with families this Christmas season,” said Chad Eikhoff. “The North Pole wanted to open their only competition show, The Jolliest Elf, for the rest of the world to participate, so we leveraged all the latest technology and added some Christmas magic to allow families to watch and vote for their favorites this season.”

In season one of The Jolliest Elf, five talented contestants from across Santa’s Village in The North Pole will compete on stage to win the title of ‘Jolliest Elf.’ As with any competition talent show, The Jolliest Elf features a charismatic host, Mr. Jingles, and three lovable judges: the glamorous and talented Glo; the hard-to-please critic Tiny; and the lovable and encouraging Frosty. Viewers will have the opportunity to vote on their favorite contestants as episodes release and votes will be tallied before the final episode to reveal the winner.

“We found in The Jolliest Elf a great opportunity to bring an innovative, fun and heart-lifting competition series to Discovery Kids,” said Flavio Medeiros, Director of Program Sourcing and Acquisitions, Discovery Kids. “It was very exciting to work with Chad, TRICK 3D and the North Pole teams in this unique show that will surprise our viewers in Latin America this holiday season.”

Brokering the 2021 co-production between TRICK 3D and Discovery Kids is Cookbook Media, a global franchise management agency led by kids media industry executives Claudia Scott-Hansen and Rob Bencal. Scott-Hansen and Bencal are distributing all media rights for season one in the rest of the world.

“We love the combination of the heart and warmth of a traditional Christmas special with the tune-in appeal of a talent competition series,” commented Scott-Hansen. “As such, we’re working to build this IP into a perennial holiday franchise through brand activation, content strategy, distribution, consumer products, live events and more. This property has high commercial appeal and also the exciting potential of new performers each Christmas season.”