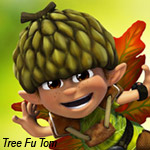 Animated preschooler series Tree Fu Tom is a hit in the United Kingdom, becoming CBeebies’ No. 1  show of the year since its debut last month.

Tree Fu Tom combines innovative elements of heroic action, fantasy and magic, coupled with unique interactive physical activity. Set in an enchanted world where movement creates magic, viewers are encouraged to interact with the show through physical actions that have been devised and approved by movement development specialists to assist in the development of children. Former Doctor Who stars Sophie Aldred and David Tennant voice the lead characters Tom and Twigs.

With animation by Blue Zoo Animation, Tree Fu Tom is a co-production between FremantleMedia Enterprises and the BBC for CBeebies. The executive producers for the BBC are Jackie Edwards and Alison Stewart, and Bob Higgins and Sander Schwartz for FME. Tree Fu Tom was created and is being produced by Daniel Bays.

“The huge success of Tree Fu Tom on CBeebies gives us the best possible springboard for using FME’s global network to take the series around the world and explore a range of really exciting partnerships right across brand licensing, consumer products and more,” says Schwartz.