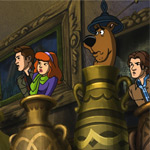 Fans of Supernatural and the Saturday morning cartoon hijinks of Scooby-Doo are in for a treat on Thursday, March 29 when The CW debuts a very special crossover episode, which sees the Winchester brothers get zapped into an animated universe.

In the trailer, we see Sam (Jared Padalecki) and Dean (Jensen Ackles) kicking back on the couch, only to be sucked in to the TV by a purple energy beam. Finding themselves 2D avatars of their former selves, they hop into an animated Impala and find the Mystery Machine in the parking lot of a diner, where Shaggy, Fred, Daphne and Velma are groovin’ to some jukebox tunes while Scoob enjoys a shake — hopefully, not a chocolate one…

As noted in the EW first-look, Dean will use his extensive Scooby-Doo knowledge to figure out where they are: in a 1970 episode of the Hanna-Barbera classic titeld “A Night of Fright Is No Delight,” but this time a monster of the Supernatural variety is wreaking havoc.

Created by screenwriter Eric Kripke, Supernatural launched in 2005 and is currently in its 13th season. Scooby-Doo, Where Are You! was conceived by Joe Ruby and Ken Spears for Hanna-Barbera Prod. and debuted in 1969; the latest series from the hugely popular franchise, Be Cool Scooby-Doo, is produced by Warner Bros. Animation and can be found on Turner’s Boomerang SVOD service. 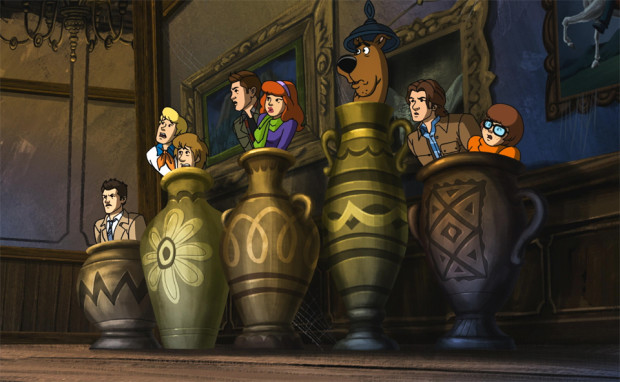