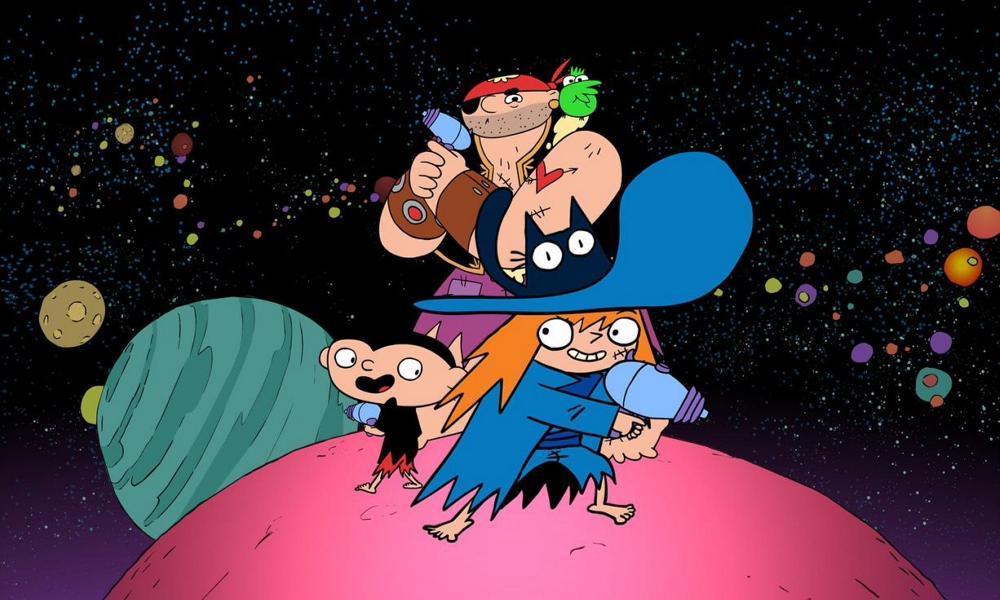 French animation house Toon Factory has announced its new series, Sardine in Outer Space, on Canal+ Group’s Teletoon+ channel (Poland) on May 4. At the same time, the studio’s Co-Founder and President, Thierry Berthier, has announced three new projects in development: How to Shrink…, Moods and The Music Traveler.

“Being a producer doesn’t get better than this when you can bring so much formidable talent into an animated series based on a no less formidable heroine!” commented Berthier. “With the essential support of Teletoon+, we wanted to produce a program that was both funny and clever — like the original comic. I feel that we have succeeded and hope that kids and their parents will embrace Sardine on screen as they have already welcomed her into their families, reveling in her adventures in print.”

Sardine in Outer Space (52 x 12′) is an animated series for kids 6-10, adapted from the comic of the same name by Joann Sfar (artistic director of the series), Emmanuel Guibert (2020 Angoulême Grand Prize winner and creator of the literary bible for the series) and Mathieu Sapin (part of the writing team led by Babette Vimenet). It will premiere exclusively on Teletoon+ on May 4 with two episodes at 11:30 a.m. (from Monday to Friday) and 5:30 p.m. (all week).

Sardine is a sparkling young lady who lives with her friends and her uncle, Captain Yellow Shoulder, aboard a spaceship. Intrepid and boundless, this explosive troupe pulls you into their incredible adventures where the only limit is imagination! Between visiting ever more exotic planets and their missions to save the Universe, the horrible mean Supermuscleman and his sidekick Dr. Krock are never far off.

Co-produced with Red Frog, Caribara Productions, Scope Pictures, the 2D series was directed by David Garcia. With a budget of 6.4M€, Sardine is one of the first animated series produced in UHD. The group Dyonisos wrote and performed the title song and the background music is composed by Olivier Daviot.

The series is distributed by Mediatoon Distribution, who put Sardine in the spotlight at the last MIPCOM. International buyers are already showing real interest and several contracts have been signed.

The original Sardine comics were initially published by Bayard Presse between 2002 and 2005. Les Editions Dargaud then picked up the rights and have released 13 volumes since 2007. The adventures of Sardine and Little Lulu now have a cult following and more than 215,000 copies have been sold. The 14th volume, Archificelle Intelligence, will drop May 29.

How to Shrink (78 x 7′, in development with Canal+) is adapted from the comics by Catherina Leblanc and Roland Garrigue (Glénat), which have sold 165,000 copies of the 15-book collection in France. Toon Factory aims to produce an eccentric 2D comedy targeting 5- to 7-year olds in the form of a game show that pits kids against the monsters that symbolize their fears and “eliminate” them using humor and critical thinking.

Welcome to How to Shrink, the TV show that shrinks, squashes, flattens, pulverizes monsters and everything that scares children young and old! Witches, ogres, ghosts and hairy monsters had better hold on if they don’t want to finish up flat as a pancake. How to Shrink is a delightful show where kids confront their fears and rid themselves of their monsters. But to do so, they need to learn how to corner them! The kids will be accompanied by a killer team to emcee the show: the intrepid Chloé, Chief Shrinker, who will not be counted out; and her alter ego and faithful pet monster, Souki, who has been tamed to obey her every snap of the fingers. Well … almost every snap.

Moods (78 x 7′, in development), created by Séverine Vuillaume and Nathalie Resnikoff, is inspired by the sometimes surprising emotional reactions of children 3-5 — the reasons for their anger, tears, agitation and incomprehension, which can be both tender and mischievous. The series is inspired by innovative educational methods that help children discover and learn how to control their emotions in small daily conflicts.

The “Moods” are 12 small characters who embody their emotions and live them 100%! Watch out for trouble with these strong personalities! How can Fury be calmed down when angry, Timid be relaxed when tense, Sniff be soothed when tears are flowing or Sulker be drawn out of a funk? Like the children who are confronted on a daily basis with such situations, Moods are overcome by the flow of their emotions. By helping each other, they will learn to cope with their feelings.

The Music Traveler (12 x 26′, in development) is a collection of musical fables — a poetic quest to enchant the imagination, created by comics artist Smain. The series will be narrated by various well-known artists, with a real orchestra recording the music and each story being presented in its own graphic style.

Toon Factory also continues its global distribution activity through sister company, Toon Distribution. They are currently shopping Chi, My Kitten (51 x 11′), a 3D follow-up to Chi, a Cat’s Life due for release in October 2020, with a second season planned for 2021. Based on the best-selling manga by Konami Kanata (2 million+ copies sold in France by Glenat), the in France by the Canal Plus group. The adventures of this adorable little kitten created in 2004 are animated by Madhouse, the celebrated Japanese studio created in 1971 (Perfect Blue, Wolf Children, Okko’s Inn).

Major Fests Partner with YouTube for We Are One: A Global Film Festival
VOD365 Scores Exclusive Raft of NBCUniversal Kids Content