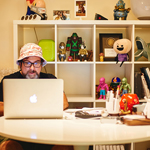 With offices in Los Angeles, New York and Vancouver, indie studio Titmouse puts its special touch on a wide variety of popular toons.

Behind the ivy-covered walls of a large contemporary building near West Hollywood, there’s a statue of Big Foot and one of the most edgy and prolific animation studios in town known as Titmouse.

This past summer, Titmouse also produced a Teenage Mutant Ninja Turtles Summer Short and completed character animation on a JAY-Z video. Meanwhile, the team’s stunning third-season trailer for Rick and Morty (“Exquisite Corpse”) has already racked up over 4.1 million views on YouTube. Among other recent credits are children’s shows such as Disney’s Goldie & Bear and Amazon’s Niko and the Sword of Light. The studio is also expanding into virtual reality projects that incorporate Google’s Tilt Brush audio reactive brushes.

“I think we have more of a house sensibility than a house style, based on the feedback we get on social media,” says Prynoski. “There’s a little something in our humor or the way we do things that’s different somehow.”

“When I was in high school, my best friend and I would shoot little movies and things. He decided he was going to NYU to go to film school and that made me think that the drawing I was doing and the movies I was making could be a job,” says Prynoski. “So, when I was a senior I started making little animated movies and I got into the School of Visual Arts in New York.”

“To make the sincere and serious moments feel genuine, we designed Big Mouth’s universe to feel real and relatable,” says Otto Tang, art director for Titmouse and the show. “The backgrounds are drawn with a bit more maturity and sophistication, compared to the exaggerated proportion of our character designs. This gives a lot more space for the writing to jump between absurd comedy and serious heartfelt subject matter. The art direction for this show isn’t something audiences will pay attention to. But it will be felt beneath, sort of like the bass line of a song.”

In the premiere episode of the new Netflix original animated series Big Mouth, pubescent boys Nick and Andrew find themselves simultaneously embarrassed and fascinated by their changing bodies and the hormone monster that threatens to remake their entire lives. If this makes you think of your own journey through the seventh grade, there’s good reason for that. The scene comes by its authenticity because it’s based on the childhoods of real best friends Andrew Goldberg (Family Guy) and Nick Kroll (The Kroll Show) and their experiences as they went through puberty at completely different rates.

“Andrew is pretty much the same height as he was in the seventh grade and I’m a foot taller,” says Kroll. “For me, it didn’t really start until high school, and by then I’d felt frustrated about not changing much for a long time.”

The 10-part series, which debuted on September 29,  was created by Kroll, Goldberg, Mark Levin and Jennifer Flackett (who created the romantic comedy Little Manhattan). All of the collaborators added bits and pieces of their own personal experiences to the series.

Naturally, topics like hormonal changes, female sexuality and sexual arousal became part of the discussion in the writer’s room. Many told stories from their own lives that became incorporated into the show or the central idea for an episode of the first season. Kroll and Goldberg both focused on making the shows funny as well as honest and real— despite the possibly excruciating memories they and the other writers might have to recall while creating the work.

Kroll says he immediately knew he wanted to voice the Hormone Monster with a scratchy, growling tone since it would pop up (no pun intended) at the most inopportune times to taunt and tempt the male characters on the show. As in life, the boys aren’t the only ones trying to ride out the biological storms that start in junior high school. Maya Rudolph gives a saucy, naughty voice to the Hormone Monstress as she brings Jessi through female puberty.

“Nick basically cast this show from his cell phone,” says Goldberg. “He went through and reached out to all these people and asked if they were interested, and luckily they were — I think because this is something we’ve all gone through and, in many ways, we’re all still dealing with the experiences that happened to us around that time.”

All 10 episodes of Big Mouth are available to stream on Netflix this month.