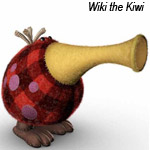 The companies will produce 78 seven-minute episodes.  The announcement was made today by Michael Shepard, president of Thunderbird Films; Paul Cummins, CEO of Telegael; and Geoff Watson, executive producer for Flux Animation.

Wiki —  a bird who cannot fly — together with his best friend Brian the Bat — not a bird, but who can fly — make for a pair of very different friends. They will take great care to guide your imaginations to a place where being different makes you the same and everything the same can seem to be very different.

“The Kiwi bird is our national hero and we are pleased to develop an engaging and entertaining series based on the adventures of this very special, yet nearly extinct species,” says Brent Chambers, managing director of Flux Animation and the series creator. “Given our expertise in animation, we are confident that the series will be unique and well-received around the world.”

“We have admired Thunderbird’s tenacity for launching new and exciting properties into the marketplace and are pleased to be in business with them and Flux Animation on this fun project,” says Cummins.

Flux Animation was established in 1997, and is NZ’s longest running and most successful producer of original animated content. Flux Animation has produced many of its own series for national broadcaster TVNZ, many of which have sold around the world. These include Staines Down Drains, Master Raindrop, Puzzle Inc. and Buzzy Bee and Friends.

Established in 1988, the multi-Emmy and IFTA Award winning studio Telegael works with international producers, distributors and broadcasters to develop, co-produce and finance animation and live-action content for the global market. Telegael’s client list includes some of the biggest names in global broadcasting including Disney, Discovery Kids, France Television, Super-RTL, KIKA, BBC, Nickelodeon, PBS Sprout and Cartoon Network. Telegael has co-produced more than 600 hours of television. Its productions have been distributed to more than 140 territories throughout the world and have been translated into more than 40 languages.

Vancouver-based entertainment, production and distribution company Thunderbird Films collaborates with talented writers and producers, maximizing the financial and creative benefits of Canadian co-production to assist in the financing, production and distribution of all genres of programming for the world market. The company is committed to delivering premium finished product that has broad appeal for broadcasters and their audiences worldwide. Today, Thunderbird Films has a catalog of more than  400 hours of Canadian and U.S. television content and its programming airs on major networks around the globe.