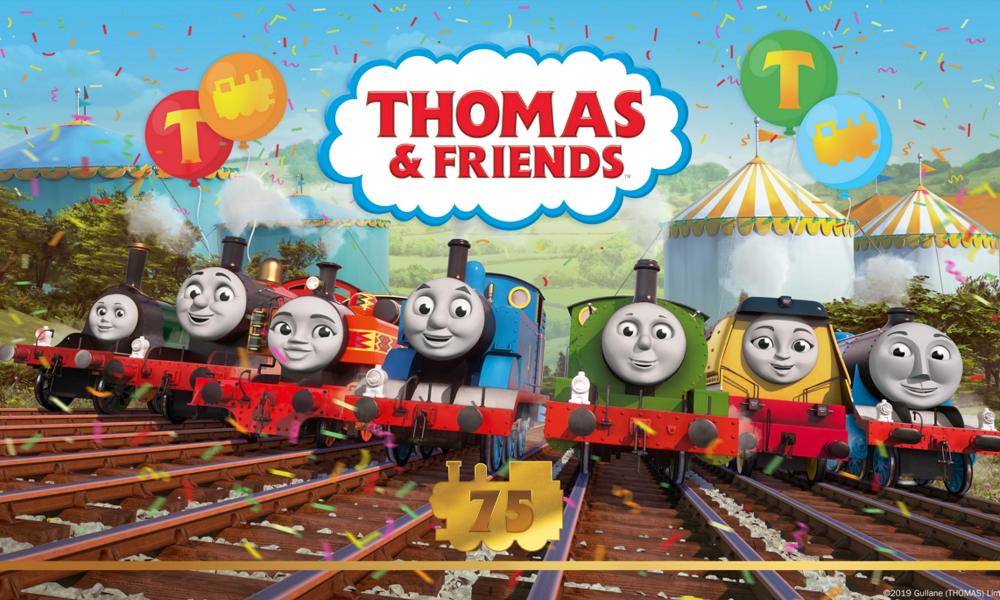 Mattel is officially kicking off worldwide celebrations for the 75th anniversary of the iconic global preschool brand, Thomas & Friends. The momentous year for the iconic No.1 Blue Tank Engine will include exciting partnerships, engaging apps and e-books, brand-new music and new episodic content and specials — including Thomas & Friends: The Royal Engine, featuring a special introduction by Harry, The Duke of Sussex.

The first Thomas & Friends story was created 75 years ago by the Rev. W. Awdry for his son, Christopher. Today, Thomas is just as beloved by children as he was when he first chugged down the tracks in 1945.

“Since the beginning, Thomas & Friends has celebrated friendship and teamwork through storytelling which has cultivated fan love across generations. In this milestone 75th year, we are releasing more storytelling content than ever before to engage the next generation of fans,” said Chuck Scothon, SVP and GM of Infant and Preschool, Mattel. “While families are spending more time at home, we are able to offer new content to enjoy together across videos, books, apps and through music and podcasts and are thrilled that we could partner with leading platforms like Calm and Caribu along with Netflix and Harry, The Duke of Sussex to bring this content home for fans.”

Anniversary year content kicks off on May 1 with a new 22-minute celebratory special, Thomas & Friends: The Royal Engine, which pays homage to the show’s British heritage and features Her Majesty The Queen and HRH The Prince of Wales as a child. In it, Thomas travels to London for the first time on a mission to take Sir Topham Hatt to Buckingham Palace. The Royal Engine includes a special introduction from Harry, The Duke of Sussex. Actress Rosamund Pike voices a new character, Duchess of Loughborough, and said it was “an absolute honour” to guest star in the 75th anniversary special.

Also releasing this year as part of Series 24 are 2 x 22’ specials under the title Thomas & Friends: Marvelous Machinery. The specials have an exciting invention theme, new and unusual characters including a flying car, and a world-class technology fair celebration. In addition, 20 x 11’ new episodes will debut. All of this content will be on Netflix in the U.S.

Plus, action sports and stunts crew Nitro Circus and Thomas & Friends are teaming up for an epic train adventure. At Nitro Circus, a “train” involves a lot more motorcycles, ATVs, and plenty of gnarly crashes. So the crew brings in some friends to help jump a “train” over a train, and that train is pulled by none other than Thomas the Tank Engine himself. Check out this stunt on Quibi’s Life-Size Toys series, premiering May 25.

New audio content includes a 46 x 5′-10′ Thomas & Friends Storytime podcast for kids, launching May 12; birthday album with three new celebratory songs (May 8) as well as more than 50 new songs through the year with accompanying music videos, and a kids’ themed sleep story/meditation partnership with sleep app Calm (May 4).

Joining the 207 million Thomas & Friends books sold over the decades, Random House Books for Young Readers (U.S.) is releasing Thomas & Friends: Best Birthday Ever — storybook packaged with stickers, a poster and a party game — while Egmont (U.K.) is releasing three titles celebrating the brand’s heritage, Thomas’ birthday and The Royal Engine special. Family activity/video-calling app Caribu is teaming up with the brand and Kevin Jonas, who will give readings of classic Thomas & Friends books every week in May starting today.

Of course, it’s not a party without gifts! Thomas & Friends is celebrating this milestone year with several new birthday-themed toys. Birthday Wish Thomas is a push-along Thomas train with a cargo cart and light-up birthday cake candle, and includes music and phrases including “Happy Birthday.” Golden Thomas is decorated with festive balloons and beats a party drum as he moves along the track and Celebration Thomas, Percy and Nia engines have shiny metallic finishes.