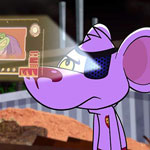 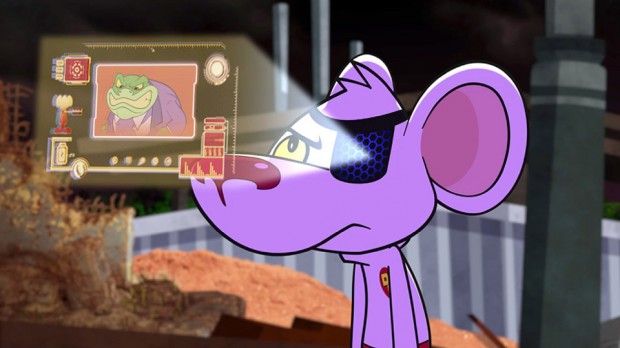 With a sleek set of wheels and an arsenal of gadgets to rival James Bond — not to mention an equally devoted fan base — cartoon super spy Danger Mouse was one of Britain’s best-loved exports by the time he hung up his distinctive eye patch in 1992.

Now, 34 years after first making his small screen debut, the quick-witted rodent and his faithful sidekick Penfold are back with a license to thrill a new generation of viewers thanks to FremantleMedia, which own the rights to the show, plus the BBC’s children’s network, CBBC, and Dublin-based animation studio Boulder Media, both of which came on-board as co-producers.

The new Danger Mouse series, which began airing in the United Kingdom in September and comes to Netflix in the United States and internationally in the spring, opens with a 22-minute double episode in which Penfold and DM, battle their nemesis of old, Baron Greenback. The German-accented arch villain manages to get the sleuthing twosome fired from the British Secret Service (run by Stephen Fry’s character, Colonel K) in order to try to take over the world with an army of robots before our hero successfully stops him, regaining his job while saving Queen and country.

Rebooting such a beloved property, which had a two-year development time, wasn’t quite as straightforward as jumping back on DM’s Danger Cycle, however. “There is always trepidation,” says Bob Higgins, executive producer for Fremantle. “You don’t want to be the one that ruined it.” As such, the team, which included CBBC executive producer Sarah Muller, Boulder executive producer Robert Cullen, and head writer Ben Ward, began the process by watching every single episode of the original series, which spanned eleven years.

Part of the inherent challenge of the project was captivating a new generation of children who were, according to CBBC’s research, unfamiliar with Danger Mouse, while at the same time trying not to alienate their parents, many of whom would have been fans of the original series. “You almost have to be more faithful to memory than you do to what actually happened,” says BAFTA-winning Ward, revealing that he watched every episode twice. “I tried to write the show that I remember.”

“People are funny,” agrees comedian Kevin Eldon, who replaces Terry Scott as the voice Penfold. “They’re possessive about old stuff, especially stuff that belongs to their childhood, and you can understand that. You don’t want to be doing a horrible thing to the memory of something that was brilliant, but I think people who were involved with this were respectful of the original. And whereas it has hauled itself into the 21st century, it hasn’t done it at the expense of the original spirit.”

The show’s “original spirit” — characterized by its knowing tone and budget-saving tricks, such as setting scenes in the North Pole to save on animation costs — is largely what attracted veteran British actor Alexander Armstrong to the title role. “I loved the way it was not only anarchic in its storytelling but also in the way that it didn’t really bother with high production values; it was all in the characters,” says Armstrong, who takes over from Only Fools and Horses star David Jason as Danger Mouse.

Although Armstrong admits the new series is “a bit shinier” than the previous incarnation, long-time fans of the show will be relieved to see that many of its hallmarks remain intact, including dialogue that breaks the fourth wall, black-out scenes in which only the characters’ eyes are visible (another money-saving device employed in the original), and, of course, the theme tune, which there was “never any intention of changing,” says Muller. “It’s a fantastic piece of music.”

And, unlike many stars his age, Danger Mouse has resisted the urge to undergo a ton of cosmetic procedures. “The character designs themselves were classic so we didn’t really feel the need to tweak them too much,” says Cullen, Boulder Media’s creative director. “Just a fresh coat of paint and some design tweaks in the faces.”

However, given that it has been more than three decades since the show’s inception, some updates were necessary for Danger Mouse to appeal to a new — and, in some ways, more discerning — generation, including a high-tech upgrade for DM’s eye-patch, which is now an “iPatch,” with all the computer wizardry that suggests, while Penfold wields a smartphone. “It was always a gadget-based show,” Eldon says. “So it makes perfect logical sense that it has the technological innovation which we see now.”

An executive decision was also made to remove humans from the Danger Mouse universe, eliminating the scale inconsistency in the original series that saw DM vacillate between rodent and human-size, while the length of each episode has been increased from five minutes to 11. “It’s a very different audience and a very different media-scape for the kids,” says Higgins. “We needed to change the blueprint to fit what the audience is demanding.”

Most significantly, that included adding an empowered female character to the cast, in the form of Squawkencluck, “a professor of everything gadgety,” according to Shauna Macdonald, who voices the brainy bird. “It was really important for me to see a strong female figure who’s listened to and is not just somebody who’s narking or perceived to just be whining,” she says.

In later episodes, Squawkencluck is joined by Game of Thrones’ Lena Headey, who voices DM’s American counterpart, Jeopardy Mouse, and Harry Potter actress Miranda Richardson as a Maleficent-inspired villain called the Queen of Weevils. “There were literally no women in the original,” says CBBC’s Muller, who says that, this time around, the producers also made a point of bringing women onto the writing team. “It replicated a man’s world, but that’s unrecognizable to the modern audience.”

Joining some of Britain’s most distinctive voices on the show are other home-grown talents, such as comedian John Oliver and actor Brian Blessed. Like Bond, the Britishness of the show is part of its selling point. “I think it was the first British TV animation to go big in the States, so it had quite a pedigree to it,” says Eldon, who confesses that he and Armstrong fastidiously kept an eye out for “Americanisms” in the scripts, which were drafted by a transatlantic writing team. “That’s only because I’m sort of ridiculous about it,” he says.

Armstrong is confident that “overseas they’ll enjoy its Britishness.” “I do feel, and I’m sure Kevin feels, that we are in some way representing our country,” he says. “I’ve sort of given up on playing Bond, and I think this scratches that itch quite nicely.”

A Satisfying Return
Heroes With A Twist