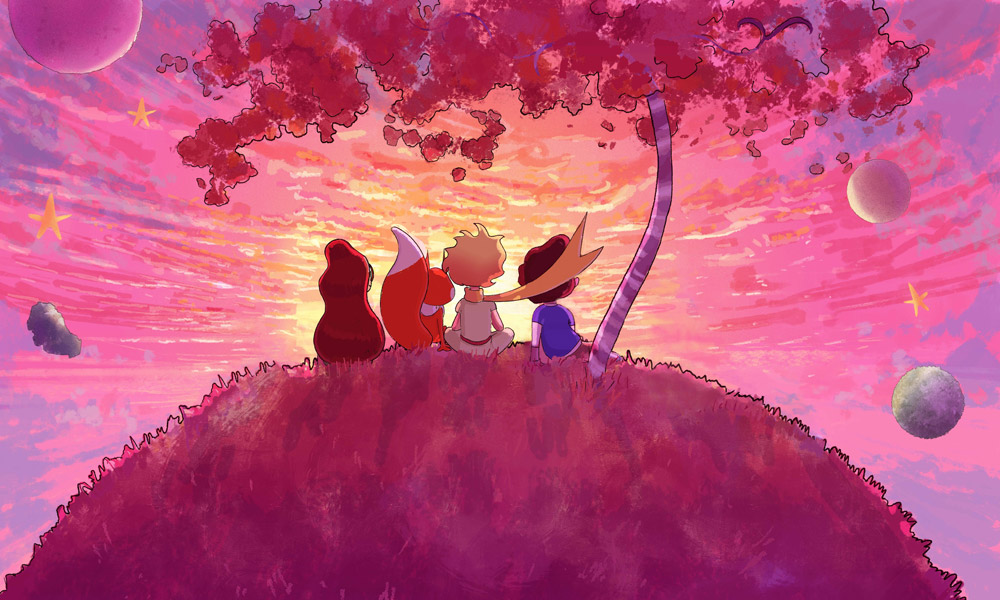 The Little Prince and Friends

ON kids & Family (Mediawan), producer of the worldwide hits The Little Prince feature film and Miraculous: Tales of Ladybug and Cat Noir, and the Saint-Exupéry-d’Agay Estate have announced the production of the 2D animated series The Little Prince and Friends (52 x 11′), inspired by Antoine de Saint-Exupéry’s masterpiece, co-produced with Bidibul Productions (White Fang, Little Nicholas) and aimed at children aged 4 to 7.

“With The Little Prince and Friends, our studio is adapting Antoine de Saint-Exupery’s universal and timeless masterpiece for the third time. Aimed at a preschool audience, the series celebrates imagination and togetherness through a new 2D graphic interpretation created by Pascal Campion and by Paul Leluc, the brilliant director of The Long Long Holiday,” adds Julien Borde, EVP, Managing Director & Chief Creative Officer of ON kids & family. “I am sure that children and their parents will be charmed by the poetry and originality of this new interpretation, just like our historical partners around the world: France Télévisions, RAI, WDR, and Gloob. We are delighted that the Saint-Exupéry-d’Agay Estate has renewed its confidence in our series. This collaboration initiated by Aton Soumache and Olivier d’Agay more than 15 years ago is the cornerstone of this new audiovisual adventure.”

The Little Prince and Friends offers today’s children a modern and tender version of Saint-Exupéry’s classic novella: a new vision of this unique and universal story, aimed at a new audience that will soon be entering primary school and starting to learn how to read. The series will be produced mainly in 2D, in order to get closer to Saint-Exupéry’s transgenerational universe.

In the series, The Little Prince sets off onboard Asteroship B612 along with two kids from our world, Charlotte and Elijah. Together, they discover the universe and its inhabitants and go on amazing adventures. Each and every little planet or star is a chance to make new friends and discover new cultures. Their journey takes us further and further, learning and having fun, and enables one of the two children to overcome a problem from their everyday life, by dealing with a parallel situation in the Little Prince’s universe.

The Little Prince and Friends was created by Simon Nicholson, a successful children’s animation writer and the main showrunner of the worldwide hit PJ Masks for the past six seasons. The Little Prince’s historical partners, France Télévisions, WDR, RAI and Gloob, are participating in this new production and will broadcast the series as of 2023.

“We are very excited to be a part of these new adventures of The Little Prince. It was a great pleasure working on the previous series with our partners ON kids and family and their creative and passionate team,” commented Brigitta Mühlenbeck, Head of Acquisition & Co-Production Kids & Family, WDR. “When Julien presented the concept of the new series to us, we were instantly delighted with the new take on the beloved classic. Not only does it bring relevance in its stories and provides characters our audience can really relate to, but it also extends Antoine de Saint-Exupéry’s universe in a very imaginative and organic way, without losing the original spirit of the book.”

“The Little Prince by Antoine de Saint-Exupéry has been among the most widely read books for generations of kids. Its message has never been as contemporary as it is in today’s world. We are pleased to support again the purpose of spreading it to a new audience of young children and families,” noted Luca Milano, Executive Director, Rai Ragazzi/Kids.

Pierre Siracusa, Head of Youth Public, Education & Animation Programs at France Télévisions, said, “The Little Prince is the child in us. In this new series, it’s precisely this childhood and its boundless imagination that goes with each adventure, that helps our heroes to solve the obstacles of everyday life. Especially, all these little things that make us grow and move forward in life: relationships, school, fears … It’s the very core idea of the series that convinced us: What if, in the playground, the Little Prince became the figure of a great benevolent towards the youngest? Charlotte and Elijah found with the Little Prince a companion, a pilot as curious as they are about everything, and together they are ready to face the world. Growing up is an everyday challenge, and so, with each episode, the Little Prince welcomes his friends into his world to find together how to overcome it and climb each step while having fun. Magic! France Télévisions is proud to participate once again in this adaptation of the work of Saint-Exupéry and to continue to make it exist among the youngest.”

“The Little Prince is a masterpiece that is still alive in the affective memories of many generations because it carries timeless values, such as teamwork, collaboration, empathy and affection. Gloob and ON kids & Family are partners in others successful IPs and we are sure that Little Prince & Friends will be another exquisite and high quality co-production that will soon reach our channels and platforms,” added Luiz Filipe Figueira, Head of Kids ‘Programming & Content Strategy at Globo.