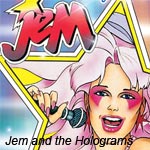 The Hub TV network will introduce its Saturday Mashup scheduling beginning on Saturday, May 28, 10 a.m. to 5 p.m. The special themed lineup that will highlight the network’s game shows, comedies, and action/adventure series in designated, kid-friendly blocks. Viewers can tune in to two back-to-back episodes of each of the Hasbro Studios series My Little Pony Friendship is Magic, Pound Puppies and Family Game Night followed by a three-hour marathon (previously announced) of the first six episodes of the favorite toon from the 1980s, Jem and the Holograms.

In addition to the framed Saturday programming events, The Hub will present special programming lineups for each of the summer holidays with an emphasis on family-friendly shows that kids and their parents will want to watch together. Memorial Day will be celebrated with the network’s “Hub of the Brave” day-long lineup of programming featuring heroic acts from some of The Hub’s favorite series characters. Father’s Day and Independence Day will feature similar lineups highlighting favorite episodes of GI Joe: A Real American Hero, GI Joe Renegades, Transformers Generation 1 and Transformers Prime.

The Hub Family Movie will include presentations of well-known classics such as Free Willy, The Iron Giant, Cats & Dogs, 102 Dalmatians, and Gremlins.

The Hub’s summer season of family entertainment continues in August with the premiere of all new episodes of the animated series Pound Puppies, including the voice talents of Eric McCormack and Betty White. The Hub Original Series produced by Hasbro Studios will kick off with an episode following the fearless dogs from Shelter 17 as they set out to have one of their own win a trophy at a regional dog show.