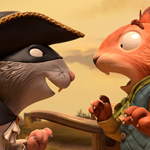 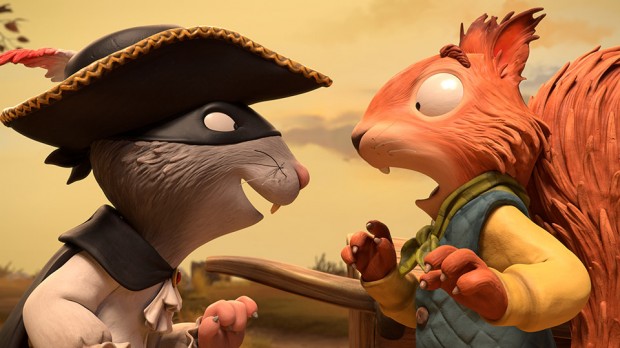 After producing The Gruffalo, The Gruffalo’s Child, Room on the Broom, Stick Man and Revolting Rhymes, Magic Light Pictures co-founders Michael Rose and Martin Pope have certainly emerged as the go-to experts in quality animated children’s specials. This month, they keep the tradition going with a charming adaptation of a book by Julia Donaldson and Axel Scheffler called The Highway Rat. The CG-animated special, which features the voices of David Tennant (Doctor Who), Rob Brydon, Tom Hollander, Nina Sosanya and Frances de le Tour, follows the adventures of a lawless rodent (voiced by Tennant) who enjoys stealing travelers’ pastries, puddings, chocolate and cake.

“Two years ago, right after we finished Stick Man, we were thinking of other works that would make great animated specials,” recalls Rose. “We came across this great book by Donaldson and Scheffler, who also did the Gruffalo books, Room on the Broom and Stick Man. I thought it sounded terrific because it centered on this swashbuckling rat who gets into terrible trouble because of his love of cake and everything sweet.”

Director Jeroen Jaspaert, who also worked with Rose on Stick Man, says the surreal quality of the premise appealed to him immediately. “You have this image of a small rat sitting on a horse, which is the cover art for the book,” says Jaspaert. “The notion of developing this bad guy/rat that we love to hate on this journey was very exciting. It was quite different from the Stick Man in our previous special. This world had a more fairy-tale quality to it, with animals that wore human clothes and had jobs.”

To produce the meticulously crafted animation for the project, Rose and Jaspaert tapped South Africa’s famous Triggerfish Animation Studios, who also worked on Stick Man and Revolting Rhymes. A team of 80 worked on the animation, using ZBrush, Maya and Arnold as their tools of choice. According to the producer, the overall budget for the special was about $2.5 million. As Rose puts it, “Magic Light’s viewers want quality in these specials. They are all adaptations of classic books, and they need to last a long time. Funny enough, the more expensive they get, the appetite for improving on the previous special also increases. We always want the best quality, and the team at Triggerfish always up our standards as well.”

One of our biggest challenges for the animation team was the scope of the world. “We have five main speaking roles, about 10 main anthropomorphic characters, and 40 overall characters,” notes Jaspaert. “These animals have bushy tails, but they are also wearing clothes. It’s also a road movie, so we travel from one place to another, so we have lots of sets. We expanded many of the book’s story elements. The Rat’s partner in crime is a very expressive horse, which is also very hard to animate. We certainly didn’t make it easy on ourselves as we have this very agile cartoon rat on a realistic moving horse.”

The book’s illustrations were the first point of reference for the creative group. “The drawings look very charming, but they are mostly done from a side view,” explains Jaspaert.  “Our challenge was making them look equally appealing in 3D. That’s why we began the process by sculpting all the characters in clay, to get that nice hand-made quality. They look like figurines — you can actually see the paint marks on them. We really wanted the charm of the illustrations to translate to the tactile, CG animation.”

Rose, whose other 2017 project Revolting Rhymes was just nominated for a European Animation Award, says he loves the way the project brings to life the story of the Highway Rat in such a dynamic way. “You really feel the energy of this swashbuckling rat riding the horse,” he says. “It’s very different to the previous specials we’ve done, and it’s really a fun-filled riot.”

Jaspaert agrees. “It’s really a miracle of small scale,” notes the director. “You feel like you’re witnessing an adventure movie. Animating these characters was a real joy as there was so much motion and agility in all the performances. We’re very proud of that!”

The Highway Rat will premiere on BBC One in the U.K. this Christmas.