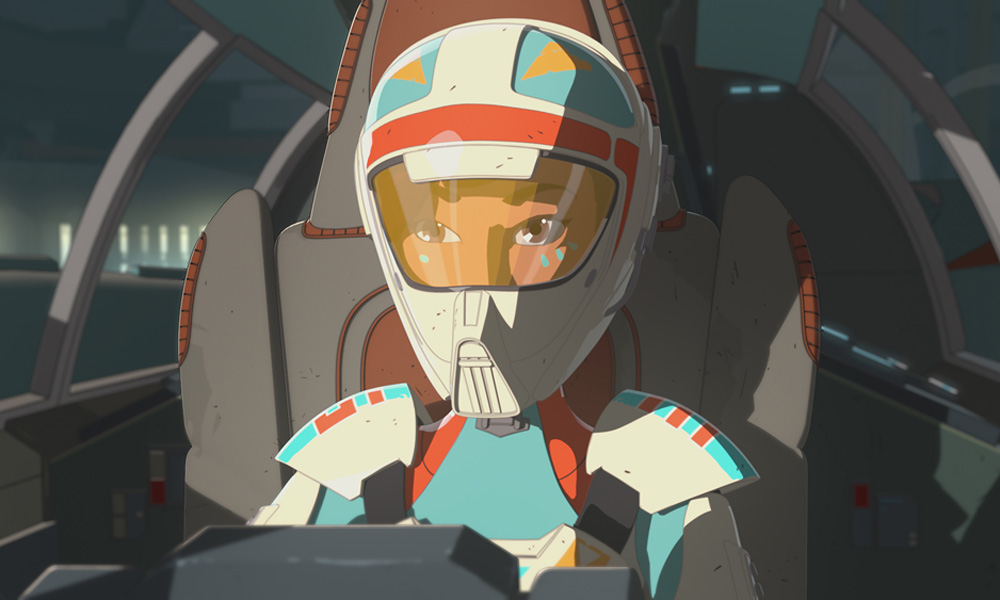 This year, Christmas comes early for Star Wars fans as the fantastic-looking new animated series Star Wars Resistance debuts this Sunday on Disney Channel and DisneyNOW (with subsequent airings on Disney XD). The much-anticipated show is the brainchild of franchise master Dave Filoni (Star Wars: The Clone Wars, Star Wars Rebels), who wanted to approach the material with a lighter touch than some of the previous animated ventures.

“The idea for Star Wars: Resistance came out of my interest in World War II aircraft and fighter pilots,” Filoni noted in a statement earlier on. “My grandfather was a pilot and my uncle flew and restored planes, so that’s been a big influence on me. There’s a long history of high-speed racing in Star Wars, and I think we’ve captured that sense of excitement in an anime-inspired style, which is something the entire team has been wanting to do for a long time.” 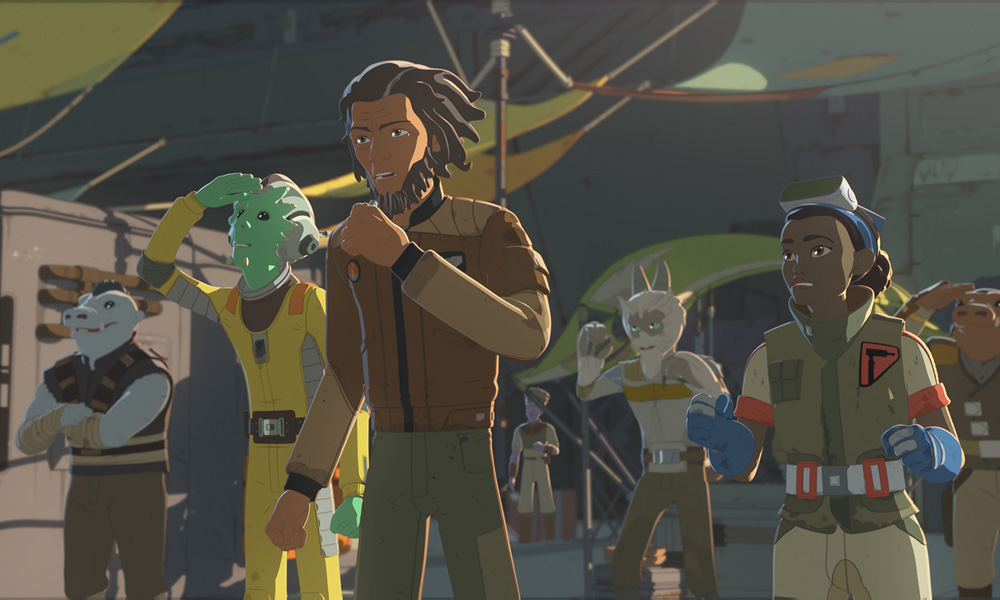 As exec producer Athena Portillo mentions in a recent phone interview, Filoni has always wanted to put the boundaries of what they could do with this property, both in terms of content and visuals. “When I started working on the show two years ago, one of the hardest things was keeping my mouth shut, because I wanted to tell everyone about it,” she admits. “It is completely different from the previous show because of the way it looks. It’s a 3D show with a 2D cel-shaded look.” 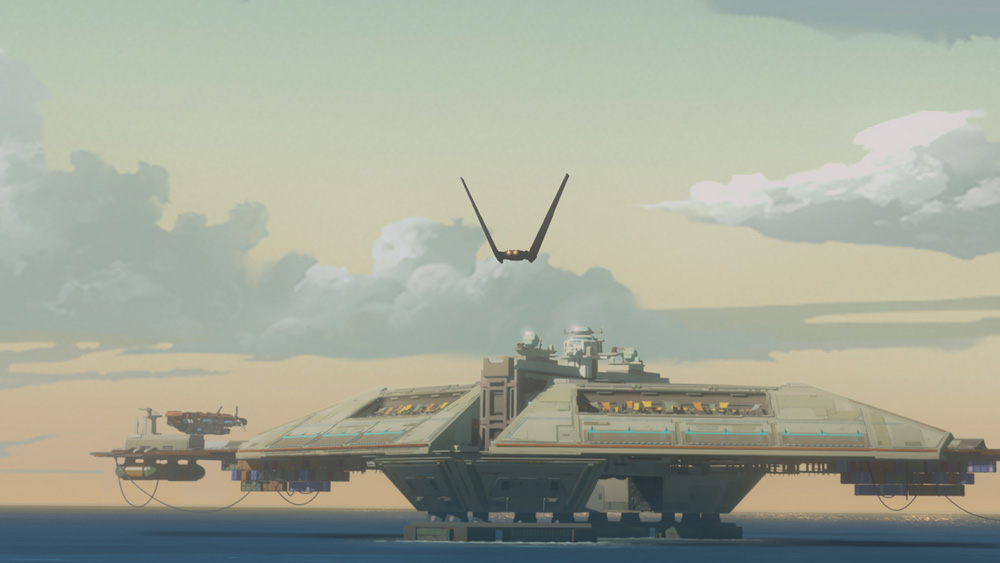 Achieving a 2D Look in CG

The smooth 2D look of the show was achieved thanks to the efforts of Lucasfilm’s partners: Taipei-based CGCG and Japan’s cutting-edge studio Polygon Pictures, which is best known for its amazing work on Knights of Sidonia and the recent animated Godzilla movies, as well as The Clone Wars. “We knew that was something they could do for us,” says Portillo. “That is their forte and they can push the boundaries of the animation in terms of building the assets and the right shaders. I still get butterflies when I see the show trailer, because we all think it looks beautiful.”

Portillo points out that the digital assets for the show looked so good that they would test them against the original designs. “We liked putting the designs and the assets next to each other and test people to see if they could tell which was which, and in most cases, they couldn’t,” she notes. “Our art director, Amy Beth Christenson, was one of the designers on Rebels, and she led the anime-influenced line-drawing concept designs. Thanks to the work of our animation supervisor, Keith Kellogg , the characters have more fluid body rigs, which allow for more squash and stretch and the inclusion of different mouth shapes that allow more expressive comedic animation.”

She also praises the amazing work of the show’s lighting supervisor, Joel Aron (Rebels, The Clone Wars). “He is able to make the shots look very cinematic and expensive. He’ll add smoke trails, laser blasts, water bubbles, anything we wanted to the scenes, and still deliver within the parameters of the time and budget.”

To create the show’s finely-tuned 2D look, the animators use Toon Boom Storyboard Pro for the animatics and rely on Maya and Nuke for animation, the same tools that were used on Rebels. They also utilize ZVIZ, Lucasfilm’s proprietary tool created for previs and visualization of CG images.

Portillo says one of the biggest challenges of the new project was coming up with stories that would make everyone happy. “We often ask ourselves, ‘OK, what will the fan base like, and what would the show’s new audience like?’ and ‘Can they walk right into the show and get sucked in?’ Of course, we have both audiences in mind. The official age range is six to 12, but we’re also creating this for viewers who are six to 70, which includes me as well,” says Portillo, who recalls seeing the original Star Wars trilogy in theaters. “With this show, we have the opportunity to explore the First Order, the genesis of the Resistance, and find out more about Poe and his relationship with General Leia. There was such a huge break between the movies, and now we get to see how they all get there.” 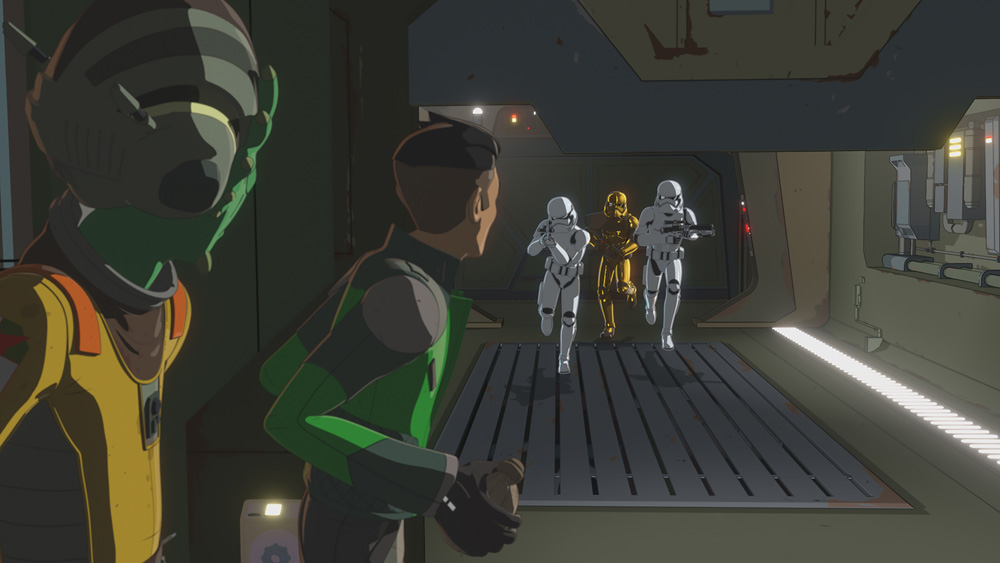 Exec producer Justin Ridge, who also worked with Filoni on Avatar: The Last Airbender, The Clone Wars and Rebels, says the show creator was keen on exploring the time period before The Force Awakens. “At the same time, we always try to push the boundaries of what we can do. This was a great opportunity to work in a style that we hadn’t done before. We are fans of anime, and we also wanted this new tone. The new era has a light-hearted feel throughout, and we felt a more 2D, hand-crafted feel would serve it much better than CG.”

Ridge says the show was heavily influenced by Hayao Miyazaki movies, as well as anime favorites such as Robotech and Lupin the Third. “We had some time too for detailed R&D on the show, and to explore how to achieve the look we were going for, how do we keep the contour lines, how to get that hand-drawn look for the backgrounds.”

Another key goal of the show was to strive for character diversity. “It was important for us to have a cast of characters that were very diverse and came from different walks of life,” says Ridge. “Our main character Kaz is a newbie, but he’s very passionate. He comes from a wealthy background — his father is a Senator — in contrast with Rey and Luke who come from humble beginnings. Kaz loves to live and to prove himself so he can get out from under his father’s thumb. I think kids can relate to that.”

Ridge also admits that the richness of the Star Wars universe can be both a blessing and a curse. “There is a lot of back story that you can explore, but what you’re doing has to fit with what has been done in the cannon. We are dealing with the First Order, and we’re not too focused on the main characters, but there is some overlap. We do have Poe, Captain Phasma and General Leia as we did feel that it was really important for continuity to have these characters be featured in the show.”

Overall, Ridge says he is quite proud of this colorful world that he and the rest of the team have created. “It’s really stunning,” he notes. “We’ve created a show that looks like nothing I’ve seen before. We’ve created this family of characters that we love, and we hope they’ll resonate with audiences and fans as well.” 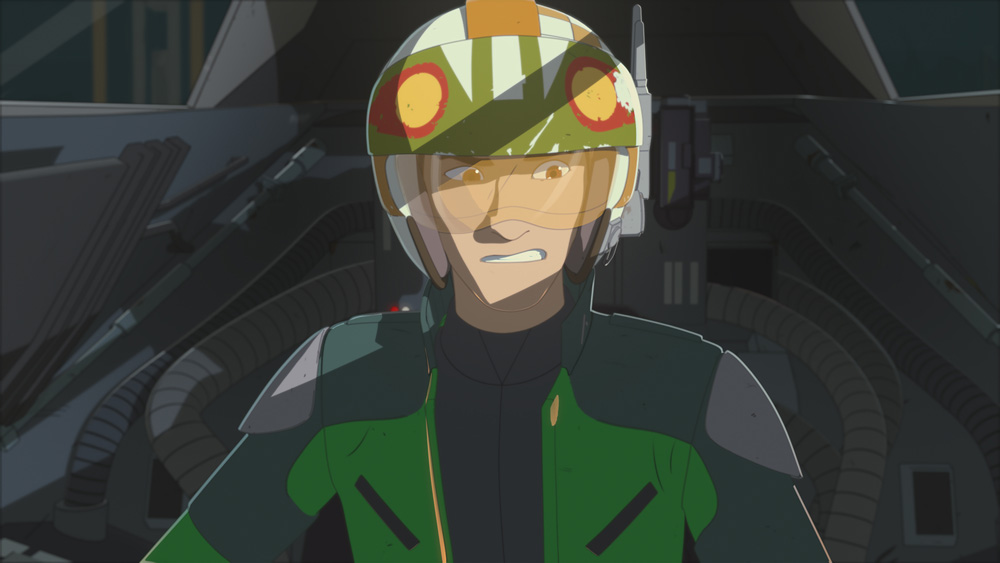 Listening to His Inner Fan

Exec producer Brandon Auman recalls getting a call in early 2016 about working on the new show. “I am a huge Star Wars nerd and know way too much about the franchise, so when Lucasfilm contacted me, I was very excited,” he notes. “I know Filoni had this idea for the show simmering for years. They had me come in with a soft pitch, but they had already developed the concept art. Then, we had this great brainstorming session at Skywalker Ranch, and it just all took off.”

Auman says he immediately fell in love with the characters. “I really think they are all good people,” he explains. “Kaz is young and earnest and is a hero in the making, while Neeku has a huge heart and is kind. The characters are all fun and funny, and you really care about them on their journey,” he says. “The series is written with emotion and heart, but it also has lots of action, adventure and comedy in the mix, too. It’s treated no differently than the live-action movies. They are all part of the Star Wars galaxy, and they have to live there, and there’s a lot of weight there.”

He says one of Filoni’s big goals was to capture the spark of everyone’s first Star Wars experience. “Early on, Dave told us, ‘Remember the first time you saw Star Wars when you were a kid!’ He wanted us to bring back that same sense of fun and innocence. He didn’t want to go dark, and wanted the show to be closer in tone to the original trilogy.”

Auman says there was a lot of talk about Robotech as well. “We watched the beginning of Robotech in the room to get everyone on the same page. We were all nerding out on that and all the things we loved in the ’80s. We wanted to bring in that sense of fun that is also seen in The Last Jedi. Solo was also an indirect influence.”

Having worked on several Marvel properties and received an Emmy nomination for Teenage Mutant Ninja Turtles, Auman is no stranger to passionate fan expectations. “I am a fan myself, so I listen to my inner fan,” he says. “But sometimes you need to dismiss those voices and try things that you wouldn’t normally go for. It’s good to get out of your safety zone and grow. Working with Dave, Justin and Athena and everyone else on the show has let us explore new territories. It’s been a truly incredible experience.”

Star Wars Resistance premieres on Disney Channel, DisneyNOW and Disney Channel VOD with a special one-hour episode on Sunday, Oct. 7 at 10 p.m. The show will then air regularly on the Disney Channel.