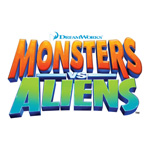 Emmy-winning animation veterans Bob Schooley and Mark McCorkle spill the beans on their eagerly awaited Nickelodeon show, which is based on DreamWorks’ Monsters vs. Aliens.

Nick and Cartoon Network had great success with TV series based on DreamWorks’ features Madagascar, Kung Fu Panda and How to Train Your Dragon. That’s why it’s not surprising that Nick is taking another chance with the studio’s 2009 blockbuster directed by Conrad Vernon. The new CG-animated series, which premieres in April, will continue to explore the adventures of the lovable ’50s-era movie monsters and a whole new group of scheming ETs who live and work together in Area 50-something! We recently caught up with Emmy-winning toon industry veterans Bob Schooley and Mark McCorkle (Kim Possible, Penguins of Madagascar), who are exec producing the new show with Bret Haaland, to find out more about their cool new venture: 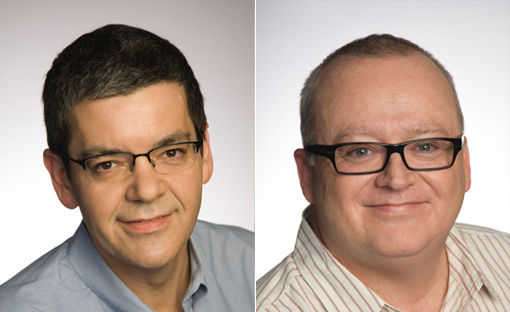 Animag: OK, first things first: Can you tell us about how and when you got involved with the TV spin-off of Monsters vs. Aliens?

Bob Schooley: Our first exposure was before the DreamWorks feature was even finished.  While we were working on the first season of Penguins of Madagascar, we went over to Glendale to see the work in progress to think about TV series potential. As it happened, by the time we were finishing up Penguins, Nick and DreamWorks were ready to move ahead with development on the project. We re-teamed with our original partner on Penguins, Bret Haaland, and reacquainted ourselves with each other and the property.

What did you like about the premise and how did you expand it to fit a weekly animated series?

Mark McCorkle: There had been some whacks at turning MvA into an action show, but by the time we came aboard the decision was made to go in a more comedic direction much like we had done on Penguins. Luckily a lot of our Penguins team of writers and artists could move right over with us. Film school 101 says that comedy is built on conflict, so when you have “versus” in your title, you’re off to a solid start. We liked the distinct personalities of the monsters and the visual variety of the team. It gave us a fantastic starting place. The problem was since Gallaxhar met his fate in the movie, we’d need fresh aliens. We took this as an opportunity to create a whole new cast of aliens from all over to balance out our monster gang. Unlike the villain of the movie, our aliens aren’t so overt with their plans, so they end up living at Area 50-Something in a kind of “keep your enemies closer” arrangement. It’s a classic comic situation. 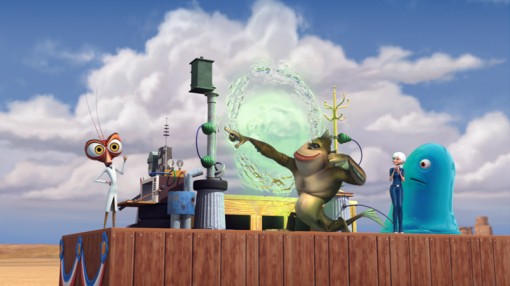 Bob:  Like all the CG shows produced at Nick, most of the pre-production is done in-house right here in Burbank, including our writing, storyboarding and our character designs. Chris Neuhahn, who worked with us on Penguins, is the supervising producer who then coordinates and oversees the CG side. Those assets are then sent to two outside animation studios for primary animation and rendering—one in Canada and one in New Zealand. Then, our Nick CG core team does some of the effects work and finishing touches here before delivery. Between Nick Animation in Burbank and the animation studios we partner with, it takes well over a 100 people to make an episode.

How does the budget compare to other shows you have worked on?

Mark: CG is still expensive compared to most traditional and Flash TV animation. The nice thing is though our budget is roughly the same as it was for Penguins, but the technology is five years down the road, so we’re getting a lot more bang for our buck. Literally! A lot of stuff blows up! 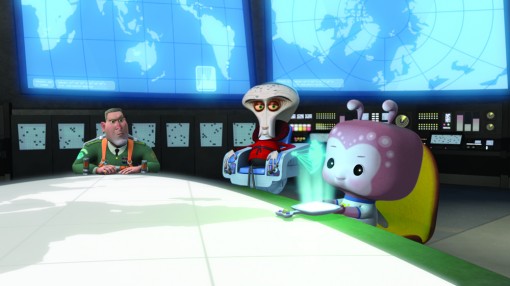 Looking back, what would you say was the biggest challenge in launching this show?

Bob: I don’t think we’ve ever started a new series and told writers, “This is an easy show.” They’re all hard. But this one was especially tricky because the science fiction/monster movie genres have been so thoroughly dissected and parodied over the last decade or so. We made the decision to really just embrace the monsters as a family—a very weird family—and let the comedy flow from character more than the genre tropes. There are nods here and there to the modern classics, but overall it’s more of a self-contained universe than we originally anticipated. And things got pretty weird fast.

Now that the monsters are ready for delivery, what are you most proud of?

Mark: It’s a gorgeous show. Everyone was really looking to top what we did with Penguins and up our game. Frank Rocco, our art director, really loves this world and it shows. We also love that we assembled a new cast of voices that are absolutely brilliant and hysterically funny. It’s a varied line up of familiar (and brilliant) animation names like Jeff Bennett, Diedrich Bader and Kevin Michael Richardson and some newcomers to the voiceover world like Riki Lindhome and Eric Edelstein. 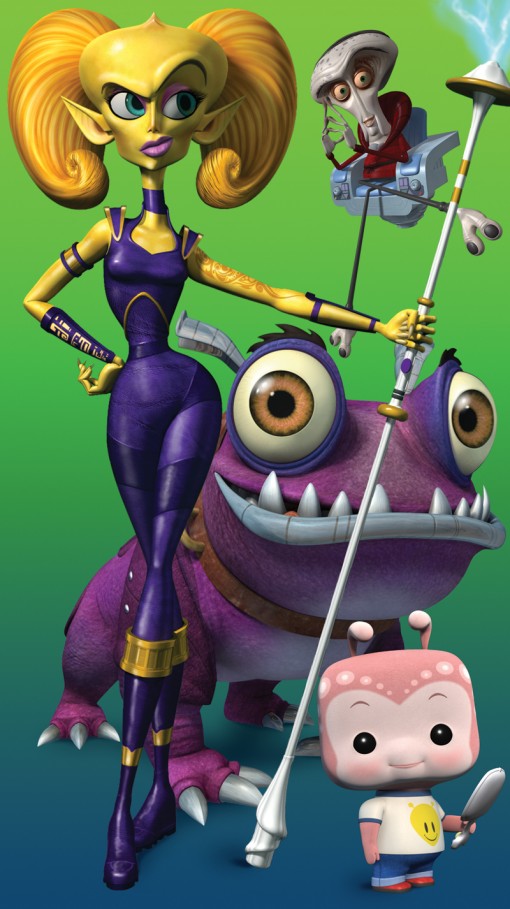 What kind of animation tools are used to produce the animation?

Bob: Had to check with our tech team for this one, since we have enough trouble getting our script software to work for us. We use Maya 2012 for all modeling and animation. Rendering is done through Mental Ray and compositing in Nuke 6.2. Plus there are a host of proprietary pipeline tools.

What were some of the inspirations for the show? Beside the movie, of course.

Mark: The B movies of the ‘50s and ‘60s are such a terrific source of inspiration. Horror and sci-fi were delightfully cheesy back then. It’s fun for us to use some of that source material as a launching pad. But like most comedies, the most powerful inspiration comes from our characters. As with our past shows, the cast provides inspiration on that front. Once the actors make the characters come alive, stories spring to life thanks to the discoveries they make during their performances. 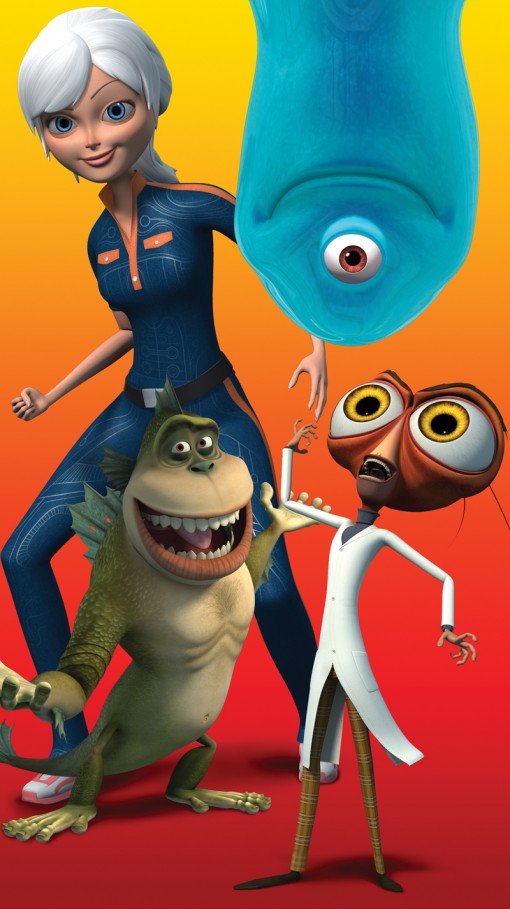 Here it comes: The big question about the state of TV animation today, compared to say, a couple of decades ago?

Bob: It’s amazing where we are as an industry compared to when we first started. The incredible variety of shows, covering every genre from comedy to action, is matched by the range of animation techniques and artistic styles. It’s a fantastic time to be working in TV animation, not to mention watching it.

What kind of advice do you offer animation professionals who want to find a job in a very competitive market?

Mark: 3-D total immersion holographic resumes are the only way to separate one’s self from the pack. Short of that, we’ve always found that the recommendation of a colleague we respect goes a long way. Our industry really is a community. We like to stay in touch with friends at other studios. That open communication can lead to us getting a tip about a talented writer or artist in search of a position. Likewise, if our crew is full, then we can reach out to others on behalf of someone looking for a job. Positive word of mouth is a powerful tool in the job market.

Who are your animation heroes? Favorite animated characters of all-time?

Bob: As we grew up, the smart humor of directors like Chuck Jones and Terry Gilliam inspired us. Once we broke into the business, Tad Stones at Disney was a great mentor and friend. Tad taught us a great deal about storytelling in general, but he also showed us how to run a show. And as parents, we watched countless hours of Rugrats and SpongeBob with our own kids.

Monsters vs. Aliens will premiere on Nickelodeon on Saturday, April 6 at 11:30 a.m.