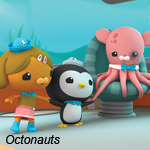 Octonauts, the hit animated U.K. preschool show, finds a new home across the pond on Disney Junior this month.

Sometimes you can tell a lot by the imaginative names of the recurring characters on a show. How can you resist a toon that offers names like Captain Barnacles Bear, Lieutenant Kwazii Cat, Medic Peso Penguin, Mechanical Engineer Tweak Bunny and Marine Biologist Shellington Sea Otter?

For the young audiences who tuned in to catch the preschool show The Octonauts in the U.K. last year, it was love at first sight. A fine mixture of beautifully designed characters, clever voice casting and a killer concept (teaching preschoolers about weird and intriguing marine creatures, while entertaining them with cool adventures), the show has found its way onto Disney Junior’s eclectic schedule this month.

Kurt Mueller, one of the show’s exec producers, remembers how it all started five years ago when he stumbled upon the book by Vicki Wong and Michael Murphy of Meomi Design, which inspired the series.

“I wrote them a fan letter because as an indie producer, you are always looking for original material,” says Mueller, who began the development process for the show during his days as senior VP at Chorion media company. “I realized that nobody had done a really legit sci-fi show for this specific age group—of boys, three to seven. Here you have this show that introduces young boys to a million and one cool alien-like creatures that exist on our planet, not to mention how insanely cool Meomi’s design aesthetic is.” 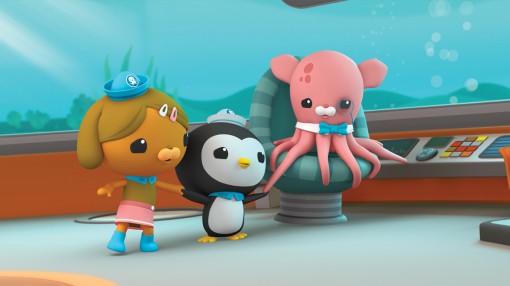 According to Mueller, Wong and Murphy pack so much information and wonderful images in one single volume of their books, that it was quite easy to base a whole season of Octonauts on the first volume.

“The way these books are written, you need to linger on five minutes at least on each page,” he explains. “These pages are really densely layered and explore rich oceanic realms. There are 10 to 15 creatures per page.”

After contacting Wong and Murphy, Mueller met with them and as he puts it, “convinced them that we weren’t corporate trolls and were going to integrate them at every facet of the project.” With the addition of exec producers Stephanie Simpson (Arthur, Wishbone) and Darragh O’Connell and Cathal Gaffney of Brown Bag Studio in Ireland and support of the BBC, the Octonauts embarked on their colorful, aquatic journey.

After its successful debut on CBeebies, other networks around the world followed suit. 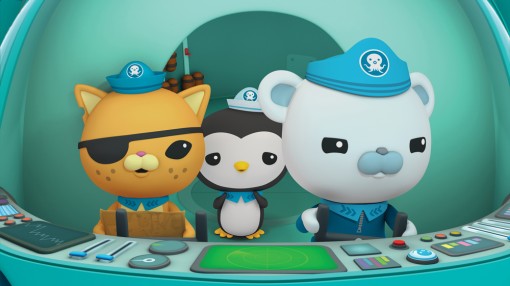 As Karen Miller, Disney Channel’s director of  global acquisitions and co-productions tells us, “With its rich look, magical storytelling and imaginative characters, Octonauts seemed to fit swimmingly alongside our other current Disney Junior shows. We are thrilled to welcome it into our programming lineup for the new year.”

Mueller, who is now the exec VP of creative content at Silvergate Media, which was formed last year by ex-Chorion chair Waheed Alli, says the version that U.S. audiences will see on Disney Junior will be slightly different from the one that debuted in the U.K.

“There were some subtle details in terms of language and accents that were very British and weren’t going to translate well, so we did some very modest dubbing on some of the featured creatures and one or two of the crew members.”

Since the show’s main target audience is young boys, the creators went out of their way to track down exciting sea creatures that would get the adrenaline flowing. 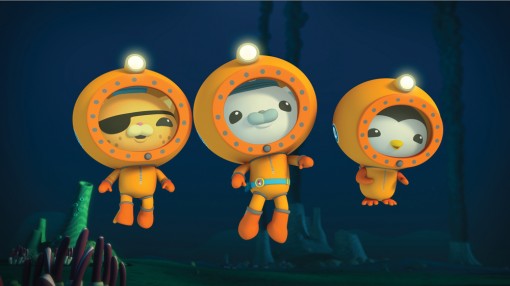 “In terms of educational underpinning, we try to include two or three marine biology facts in every episode. However, we also steer clear of more obvious choices and go with things like electric torpedo rays or vampire squids, so that the kids will get a special thrill. Just like the monsters on Scooby-Doo used to scare us—but you knew they were a fun scare.”

From a visual standpoint, the series does a remarkable job of taking the flat 2D art of the books and moving them into a somewhat 3D world.

“Our goal was to take the original art and move it into a straight 3D world—call it 2.5D,” says Mueller. “We have maximum expressiveness in terms of characters and they have lots of ability for the CG rig to move around in the action sequences, but we also echo the style of the original books. All the in-between art, the flora and fauna of the show carries the intentional cardboard cut-out style that we associate with books and kids’ diorama projects for science classes in school.”

The second season of the show (44 11-minute episodes and four 22-minute specials) is already in the works, slated for a late 2012 premiere in the U.K. Dublin-based Brown Bag does all the design work and the boarding and the animation production is handled by Crest Animation in India. 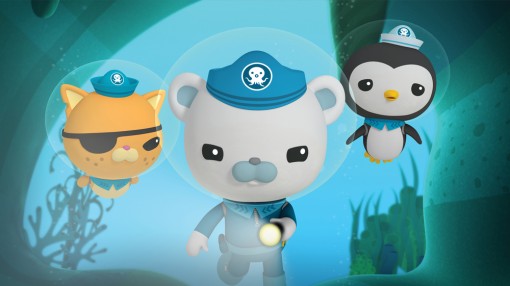 For now, Mueller and his team are thrilled that the show is airing on Disney Junior Stateside.

“We are not embarrassed that we are producing an entertaining show, but we’re also happy that it doubles as something meaningful, educational and incredibly topical,” he explains. “As cheesy as it sounds, oceans have a unique way of connecting everyone and we all understand the poetry of the oceans, whether you are an animator in Mumbai, work on the post in London or a writer in L.A. We wanted to create something soulful and cathartic and create a program that could be shared by all members of the family. There’s going to be something that sparks your imagination, gets you excited or simply cracks you up.”

The Octonauts airs on Disney Channel weekdays at 11:30 a.m. and weekends at 7 a.m.

Clockwork Magic
Anything But Elementary!