Teletoon Canada has renewed 9 Story Entertainment’s mobster toon Fugget About It. Thirteen new episodes of the show will be ready for the fall of 2013. Originally developed for the 2007 Teletoon at Night Pilot Project, Fugget About It season 1 premiere will air later this year.

“This is 9 Story’s first foray into primetime animation and we’re thrilled to have a second season of Fugget About It greenlit by TELETOON prior to the series launch,” said Vince Commisso, president and CEO 9 Story Entertainment.

The toon follows the adventures of Jimmy Falcone, who was once a feared capo in the Gambini crime family, who had to cooperate with the Feds after his associates insisted he whack his good old Uncle Cheech. Jimmy and his family are then sent into witness protection in cold, snowy Regina, where it’s hard for a quick-tempered goodfella to live as a regular schnook among naive and friendly Canadians. 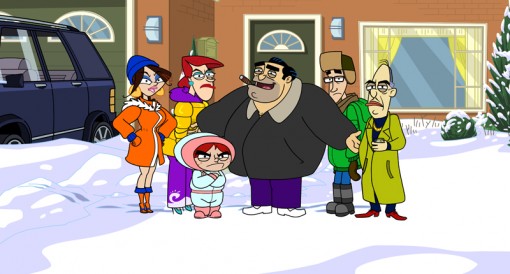