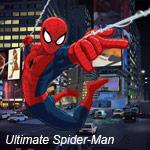 There must be something so primal about the Spider-Man legend that each generation seems to demand its own version of the mythic Marvel superhero. Since movie audiences are treated to a new reboot of the agile crime-fighter this summer, it made total sense for the team at Marvel to synchronize an updated animated TV series featuring the web-slinger.

The fact that the new Ultimate Spider-Man show is co-exec produced by original creator Stan Lee and Eric Radomski (Batman: The Animated Series, Spawn) and produced by Man of Action Studios’ Joe Casey, Joe Kelly, Duncan Rouleau and Steven Seagle makes the arachnid offering even more enticing. And let’s not forget that toon master Paul Dini (Batman: The Animated Series) wrote the pilot and is credited as creative consultant for the show.

“We really wanted the show to feel like Marvel, just like the live-action movies and the comic books do,” says Jeph Loeb, Marvel’s head of TV, who exec produces the series with Alan Fine and Joe Quesada. “If you were to spread out a bunch of comic books from different companies on a table, you could easily point to the ones that were from Marvel. The adventure is bigger than the page: The characters bring you in emotionally, but the action and adventure jump off the page and knock you out of your house! It’s in the Marvel DNA!” 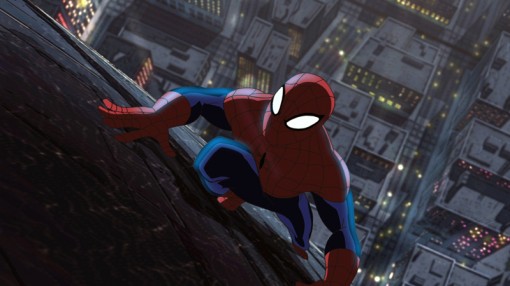 It seems that most of the creators and artists who are working on the new show have a special fondness for Spidey.

“Spider-Man has been a personal favorite of mine since I was a boy,” says Man of Action’s Joe Kelly. “He is this normal kid who has these amazing powers, and to paraphrase the famous quote, working on the show came with a huge level of responsibility, because it’s such an iconic character.”

Kelly fondly remembers getting his first Spider-Man comic books from his uncle back when he was seven years old. 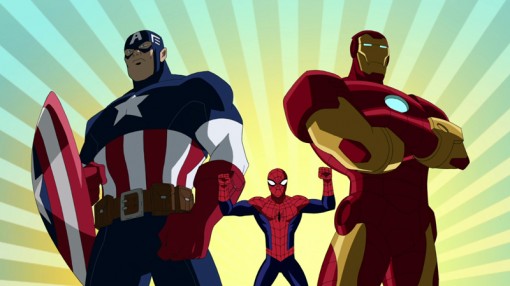 “I loved the way he cracked jokes, and as a kid, I found him so appealing. I also remember seeing him for the first time on TV on The Electric Company.”

He also points out that one of the greatest things about Spider-Man is his ability to deal with the blows of life in a positive way.

“No matter how bad things get, he manages to come up with a way to improve the situation, to make lemonade out of life’s lemons,” say Kelly, whose many animated credits include Ben 10, Generator Rex and the upcoming feature Superman Versus The Elite.

Of course, there’s that famous Spidey sense of humor.

“What’s unique about Spidey is that he has a remarkable sense of humor—even more so than any other Marvel character,” adds Loeb. “Peter is constantly bringing the viewer into his world. He might stop, turn around and look at the viewer and talk to you. In a way, he’s inviting us to take part in all the drama, comedy and adventure.”

Kelly also brings up the point that this particular incarnation of Spidey offers a special approach to storytelling. 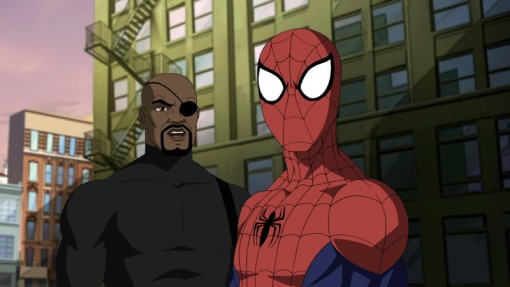 “We looked at the lot of the previous Spidey shows, and there was a lot to like about each one of them. One thing that was important for all of us was the storytelling itself. In the comic books, Peter has this internal monologue and talks to himself. We wanted the same direct connection with the audience, so that he can break the fourth wall. We wanted the show to be a real Marvel comic come to life, with the same kind of humor. So we explore the humor the way only animation can do. This is not about just having one-liners from a guy with no mouth—but it’s  about really exploring the medium with visual gags, cut-aways, etc., and really having fun with the situations.”

In the new show, viewers get to meet a teenage Peter Parker (voiced by Drake Bell) who is juggling the daily challenge of high school life with the not-so-ordinary demands of being a superhero. Parker is also invited to join the S.H.I.E.L.D. organization by Nick Fury (voice of Chi McBride) where he meets four other young superheroes in training—Nova, White Tiger, Power Man and Iron Fist.

“I think another fun aspect of the show is that you can recognize some of the other characters from the other series or movies,” adds Kelly. “Harry and Mary-Jane are there, and Flash makes his presence known. You can open the door to the other characters in the Marvel Universe. There are definitely a lot of surprises in store for the die-hard fans.” 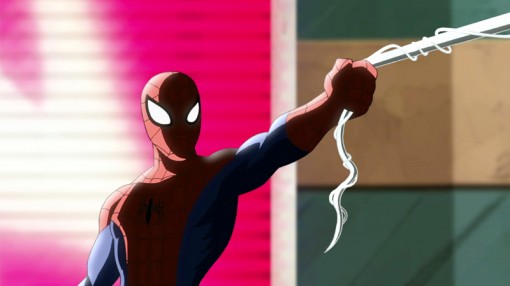 Given the top-notch studios involved (like Korea’s Dong Woo, EMation and Moi), you know that the animation is also going to be high-end and stylish.

“The animation team has done an incredible job of translating the Marvel style for a modern audience,” says Kelly. “It feels like Marvel, but it’s not the Golden or Silver age of the comic book, it has a more realistic feel to it—a real gravity. You can build the city in 3D or give an episode a hand-held camera quality. We have sets that are flawlessly integrated with the lead characters. When you have Spidey talking to the camera and you see things through his perspective, the animation style is really trippy. It keeps the action bouncy and fun.”

According to Loeb, Paul Dini has also been a big lifelong fan of the character. 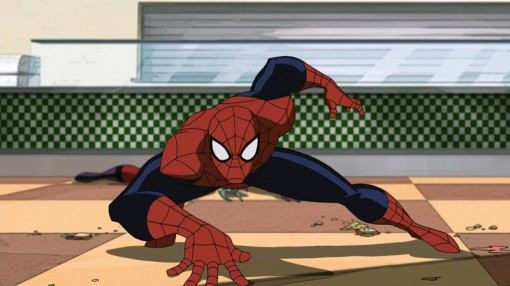 “Paul Dini, whom we all love and know from his animated Batman series, is the biggest Marvel geek in the world,” says Loeb. “He has worked across the street (at Warner Bros. Animation) for so long, I can’t believe nobody had asked him to play with us. So we were very pleased to have him, as well as the Man of Action guys, Brian Michael Bendis—who has worked on so many Marvel comics—and Eric Radomski, who had this great vision for what the show was going to look like. On top of that, it moves like a freight train. You feel like you’ve had a great meal after you watch an episode, and you want to see more.”

“I think the series has been successful in recreating the experience I had when I was reading the comics as a kid,” he says. “We’ve struck that fine line between being action-packed and funny. And it also has a heart. This is the kind of show I look forward to sharing with my own son.” 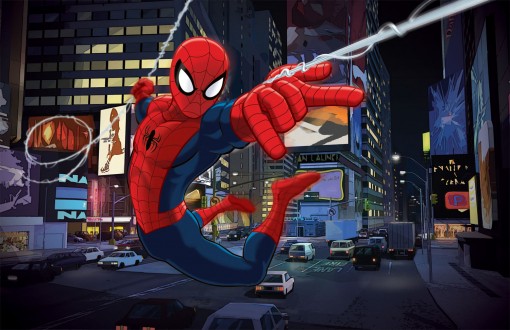 Ultimate Spider-Man premieres on Sunday, April 1 at 11 a.m. on Disney XD as part of the new Marvel Universe block, which also features the second season of The Avengers: Earth’s Mightiest Heroes as well as short-form animated series and live-action interstitials, hosted by Morgan Tompkins.

What Animation Means to Me…
Beyond Talking Pigs and Singing Chipmunks