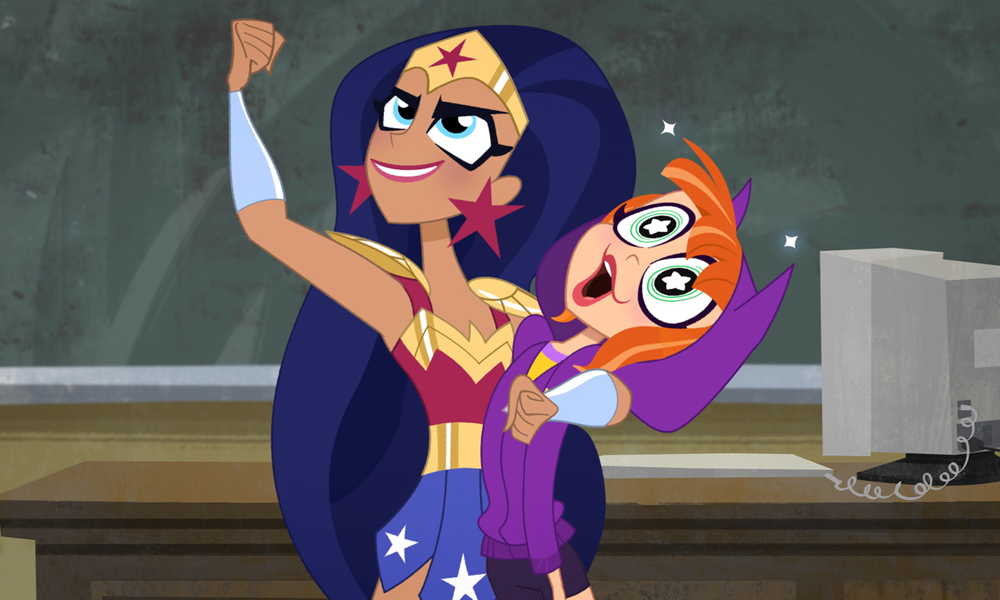 Lauren Faust has a lifelong love of superheroes and comic books, dating back to a childhood spent watching reruns of the classic 1970s live-action Wonder Woman series starring Lynda Carter. “I remember being pretty obsessed with it, and spending a lot of time spinning around in my living room, transforming from Diana to Wonder Woman,” says Faust.

Having created the hit animated series My Little Pony: Friendship Is Magic — and unintentionally unleashed the Brony phenomenon upon an unsuspecting world — Faust is back at Warner Bros. relaunching the studio’s hit DC Super Hero Girls web series as an all-new TV series. It debuts with an hour-long episode March 8 on Cartoon Network.

This is not Faust’s first swing at these characters. In 2011, she produced five Super Best Friends Forever shorts, starring Batgirl, Supergirl and Wonder Girl, for Cartoon Network’s DC Nation block. Faust then developed an entire series for WB that was shelved after failing to find a broadcast home. Faust moved on, and the studio launched a different DC Super Hero Girls animated web series. Faust emerged from Equestria to find WB ready to reboot the property and invite her back.

“I approached [the new show] like a whole new thing,” says Faust. The biggest change for the new series is the reintroduction of secret identities. “We’re doing more the old-fashioned idea that they are regular people — they’re Diana Prince, Barbara Gordon, Kara Danvers — and they go to a regular high school with regular kids, and nobody knows they’re also superheroes,” she says.

That means finding for each character what Faust calls a teenage ”mirror,” or archetype that reflects each hero’s powers and history. Wonder Woman (voiced by Grey Griffin), for example, is the classic heroic leader. “What I went with is that she’s the valedictorian, she’s the most popular girl in school — and she deserves to be because she’s genuinely kind and nice and responsible.” She’s also an Amazon, new to modern society and technology. “She aces AP Calculus in school, but she can’t use a phone. She can ride a horse, but she can’t drive a car. And she can speak 20 different languages, but she totally butchers slang,” says Faust

Supergirl (Nicole Sullivan) is the muscle of the group, which Faust says suggested that she should either be clumsy or have a bit of a chip on her shoulder. “We almost take a kind of Jeanie Bueller in Ferris Bueller’s Day Off approach with her — that she’s sick of being in Superman’s shadow and nobody knowing who she is,” Faust says.

Barbara Gordon is inspired to become Batgirl (Tara Strong) because she’s a straight-up Batman fangirl. “She has all these comic books, she collects all his action figures, and her goal in life is to replace Robin as his sidekick because that just makes more sense,” she says. Fans got a first look at Batgirl in “#TheLateBatsby,” an extended remake of the Super Best Friends Forever short “Time Waits for No Girl” that was attached to last summer’s Teen Titans GO! to the Movies feature.

As a Green Lantern, Jessica Cruz (Myrna Velasco) was so powerful that she could easily defeat most the villains by herself. “To put a bit of a cap on her powers, we decided to make her the woke teen,” says Faust. ”She is a pacifist, she’s a vegetarian — she has these powers, but she refuses to hit anybody with it.”

Less-well known is Bumblebee (Kimberly Brooks), who has a tech suit that lets her shrink and fly, and is the shy girl in the group. Zatanna (Kari Wahlgren) is the performer of the group, Faust says: “She’s a theater geek and everything she does is about performing.”

The heroes have, of course, a rival group of villains — each with a similar mix. “Catwoman is the shoplifter; Poison Ivy we’re making a recluse, like Ally Sheedy in Breakfast Club; Giganta is the bully; Livewire is the gossip,” Faust says. ”Star Sapphire is in the mix, and she’s the crazy ex-girlfriend. Basically, she’s after Jessica Cruz because she thinks that she’s dating Hal Jordan.”

And then there’s the ever-popular Harley Quinn. “Every school had one — she’s the girl going to juvie,” says Faust.

Clearly humor plays as much of a role as super heroics and teenage angst. Faust says as an animator she likes visual jokes and character-based gags, as seen with Batgirl in “#TheLateBatsby.” “We’ll got a little more classically cartoony with her than we do with a more grounded character like Wonder Woman,” she says. ”And when Harley Quinn comes around, we almost treat her like being a cartoon character is her superpower.”

Faust says she drew on her own style in designing the characters. “My own personal way of drawing is a strange combination of giving characters volume, but also using techniques you use for characters that are very flat,” she says. Faust also made a clear decision to give the characters diverse body types. “That was one direction I was very focused on trying to achieve.”

The series is set for 26 half-hour episodes, each containing two 11-minute episodes. Faust says the premiere hour-long episode is essentially a four-parter, and there will be a few two-parters in the mix. Animation is by Boat Rocker Media’s Jam Filled Entertainment in Ottawa.

Airing on Cartoon Network, the show is primarily aimed at kids 6-11, but Faust says she has always come from a place where the shows draw in an older and more diverse audience. (This means boys can watch, too, Faust says.)

Unleashing Bronies on the world is perhaps the best possible training imaginable for navigating conventions filled with die-hard comics fans. But Faust says she’s excited to talk to fans about her take on DC’s leading ladies.

“I did take some liberties here and there, and I’m very curious to see what fans think of it,” she says. “For instance, Wonder Woman doesn’t fly in our show, and she’s been flying around since the ’80s, I think. So we did take some liberties, but it’s very important to me to stay true to the essence of who these characters are.”