Technicolor has announced an agreement with Canada’s Mercury Filmworks to co-develop and co-produce a new animated children’s TV series titled Atomic Puppet. The company plans to introduce the new series to international buyers during the MIPCOM market in Cannes this year—you can find them at the Buyers Club Level 01 in the Palais des Festivals.

Currently in development for a 52 x 11 package, Atomic Puppet will be a 2D-animated comedy series targeting boys 6-11. The story was thought up by Mark Drop and Jerry Leibowitz and will follow Captain Atomic, Model City’s fearless superhero, who is transformed into a powerless puppet by his disgruntled sidekick—and his powers are accidentally transferred to his biggest fan, 12-year-olf Joey. Together they form an awkward and comedic duo striving to become the city’s greatest superhero team.

“Mercury Filmworks is a brilliant animation producer and they completely understand the vision for Atomic Puppet,” says Steven Wendland, Technicolor’s VP of animation. “This series has all the elements that will appeal to our demographic—comedy, action, and super heroes —and we are excited to bring Atomic Puppet to the attention of international buyers at MIPCOM.” 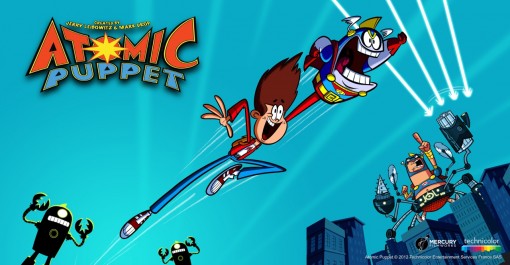