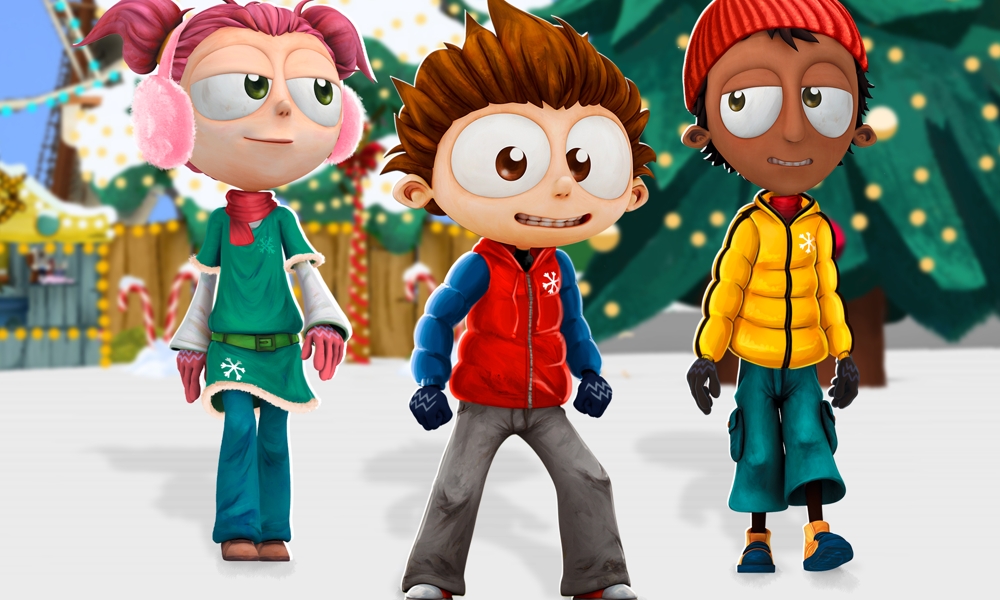 Corinne Kouper, SVP Development & Production, TeamTO, commented “After more than 10 successful, fun-filled years on air, it was about time Angelo starred in his own feature length adventure. Angelo’s original take on the spirit of Christmas is sure to make sparks fly!”

Season 5 (1 x 60’ + 46 x 11’) will kick off with Angelo’s first ever Christmas comedy special which will be broadcast on Canal+ and Super RTL on Christmas day 2021. This year, Angelo finds himself on Santa’s naughty list and gets stuck reliving the day before Christmas over and over again, in a nightmarish yuletide time loop. In order to escape, Angelo’s going to need a team, a plan and — a friend who speaks elf!

“We are very pleased that we can finally present this long-running show in film length. The festive Christmas setting is bound to inspire joy and giddy anticipation in our young audience, and Angelo’s tumultuous quest for his own Christmas miracle will keep kids on the edge of their seats,” commented Thorsten Braun, Chief Content & Revenue Officer, Super RTL.

Angelo Rules S5 will launch in France and Germany in 2022 and will introduce a brand-new rival: West Side Academy, a shiny, fancy, modern school. Rumor has it they have a pool, a dairy farm, a green roof where kids grow their own lunch, a surf club, a black-box theater, a music recording studio, and more. The ongoing battle between the two schools gives Angelo and friends the opportunity to ally with some of their old rivals, like Tracy, Mr. Foot, and Manetti. Now that they all have a common enemy, get ready for some epic Angelo mayhem!

“France Télévisions, the leading partner in French animation production, is proud to continue its collaboration with TeamTO on this successful series, enjoyed by our young viewers on Okoo, our public broadcasting kids platform, as well as on France 4,” said Pierre Siracusa, Director of Youth Programming and Animation, France Télévisions. “The new themes of this latest season and the arrival of an event-driven long-format adventure usher in an even brighter future for our on-screen hero and his sidekicks, to the certain delight of Angelo’s many young fans.”

Nathalie Leffray, Head of Animation Development, Canal+ Kids Department, added, “Canal+ has been supporting all of Angelo’s cunning plans since the beginning! Like his faithful friends Victor and Lola, we are delighted to follow him once again into his fifth series — starting with a totally loopy and surprising holiday Special where the spirit of Christmas is challenged by a more mischievous and spirited Angelo than ever. And for the great enjoyment of our viewers, the special will be available exclusively on our channels and Mycanal at the end of this year.”

Aired in over 100 territories on premium platforms like Cartoon Network (EMEA, Latin America, Asia), France Télévisions, Super RTL and Canal +, Angelo Rules has consistently secured great ratings on TV, and the digital world as well: the series’ four digital games (Angelo Skate Away, A Busy Day, Super Run, Funny Faces) have been downloaded over 6 million times. The series has also been widely recognized within the animation industry, receiving a Pulcinella Award for Best Kids TV Series (Cartoons on the Bay 2010) and nominations at the 2013 Emmy Kids Awards, 2013 Trickfilm Festival, 2012 Anima Mundi and 2011 BANFF World Media Festival.

Angelo Rules is a TeamTO/CAKE co-production with TeleTOON+ in collaboration with France Télévisions and Super RTL. Based on the French series of books Comment Faire Enrager, written by Sylvie de Mathuisieulx and illustrated by Sébastien Diologent, the series is produced in association with IRP (Amy Jackson and Andy Rheingold).