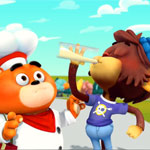 Sometimes the simplest ideas can inspire brilliant animated shows. Take, for example, the  upcoming new toon from Boat Rocker Media (formerly FremantleMedia Kids & Family) and T&B Media Global in association with Shellhut Entertainment, which follows the adventures of three animal pals who travel the world in a food truck in search of exotic ingredients and killer food concepts. Like a plate of hot, freshly made tacos, the new CG-animated Tasty Tales of the Food Truckers is hard to resist and easy to devour — and Boat Rocker will be serving it up as part of its MIPTV slate.

The origins of the show go back to Bangkok-based T&B Media Global and Shellhut Entertainment (Shelldon), who came up with the premise a few years ago. “We thought the basic concept was a good one, but we thought it was a bit too young,” says Boat Rocker EVP of kids & family Bob Higgins. “There was such a glut of preschool shows at the time, and we felt we could do a great comedy. We had this opportunity to turn it on its head, add a more of an Indiana Jones element to it, and make it a bigger, better, funnier adventure show.”

To help bring the show to animated life, Higgins reached out to L.A.-based animation veteran Dan Clark. “We had worked on a show together for Disney years ago called Team Smithereen, and I knew he could bring that level of energy and zaniness to the show,” says Higgins, whose many credits include The Ricky Gervais Show, Kate and Mim-Mim and Danger Mouse. “Dan is one of those guys who can take a basic concept and turn it into something unique and really special. We did a big redesign and came up with these three crazy characters. Dan also brought the food truck element and made it really timely and amped up the comedic elements.”

Clark says when you look at the show from a distance, it’s an adventure comedy about three characters who travel in a food truck, almost getting killed, cooking great food and making friends all over the world. “But it’s also a show about characters who are passionate about things,  and it really celebrates the positive,” he notes. “We also want it to be both accessible and quirky. We constantly tried to make a show that could be watched by everyone. We asked ourselves, ‘Are we cool enough for the kids, and are we emotional and ironic enough for adults?’ We bring the characters into sharp focus, and each time we peel back the onion, they become more accessible.”

An Appetite for Teamwork

The main characters on the series are very easy to root for. Sonny is a little bear who is passionate about food, cooking and travel, while Andi is a red panda who is all about solving problems, critical thinking and who knows hot to fix the truck. Tong, the tween monkey, is a different story altogether! “He is based on my own personal, neurotic envy,” jokes Clark. “I used to see these young people on Instagram, who travel all over the word, having adventures and finding out ways to monetize their lifestyle. They made me realize how small and horrible my own life is! Tong is a great communicator and filmmaker and is a whiz on social media, just like the young boy in the movie Chef.”

The show’s design was done in Thailand by the team at Shellhut Entertainment and Riff Studio. “I loved this show from the moment we dreamt up the idea,” says Dr. Jwanwat Ahriyavraromp, director and CEO of Shellhut. “We brought on the most accomplished designers and artists who shared our vision to create the show’s beautiful aesthetics. Since it’s an adventure series based on real ingredients and real places, our audiences will be able to identify with our friends on a more personal level. Sooner or later, our friends may visit your country looking for the rarest, coolest ingredients!”

While the preproduction, scripting, voicing and post is done in Los Angeles, the series’ animation production studio is Singapore’s Tiny Island, headed by David Kwok who has also exec produced series such as Dream Defenders and Shelldon. “They are really killing it over there,” says Clark. “They are very detail-oriented and very smart about physical blocking and comedy. The characters’ expressions, the eyes, the way they hold their hands — they make really smart, empathetic choices for them. We’re really proud of their work.”

As Kwok points out, “The characters are very funny and their journey is hilarious. The kids are going to love it. Working with Dan and the rest of the creative team has been a lot of fun.”

Clark says when the show’s bible was finished, his knee-jerk response was to drive the design to Los Angeles, but since Shellhut wanted to keep the design in Bangkok, he agreed. The result has been one of the greatest collaborative experiences of his career. He especially tips his hat to the work of lead artist/producer Kantapong Tapanyo (a.k.a. Cheer). “He is the super-talented man behind the design of the Food Truckers and their world,” he notes. “The end result is a very cool East meets West combo that feels both classic and distinctive at the same time.”

Another major contributor to the project is Oscar Covar, Clark’s producing partner, who created the show’s pre-production pipeline from scratch. “A very tight budget and schedule can sometimes translate into so many sacrifices that one may end up with a mediocre TV show,” notes Clark. “But for Food Truckers, Oscar built a pipeline designed to give our writers, storyboard artists, actors, animatic editors, composer a structure tailored to support the creative and guard the budget and calendar. Thanks to Food Truckers, our company now has a pre-production pipeline that’s based in Hollywood and is also more cost effective and creative than an overseas tax credit deal.”

Clark is also thankful for the work that L.A.-based recording studio and post facility Bang Zoom! Entertainment have done on the show. “The big surprise for me was finding out that they’re also doing great VFX, color correction and picture post, too,” he says. “They’re morphing into a sound and picture company. We’re super lucky to be working with them.”

Looking back at the experience, Clark says the international co-pro has been better than he ever imagined it would be. “We have people working on the show in Bangkok and Singapore. Bob is troubleshooting in New York, and we have our team in L.A. Someone is working on the show around the clock in different time zones. It’s true that working globally is a lot better than tinkering in a box in Burbank by yourself. We now have a great-looking show that is made by a group of people who really care about what they are producing. We hope kids find Food Truckers as delicious as we find it.”

The first 26 x 11’ episodes of Tasty Tales of the Food Truckers will be ready for delivery this summer. For more info., visit shellhutentertainment.com , tandbmediaglobal.com and boatrocker.com. 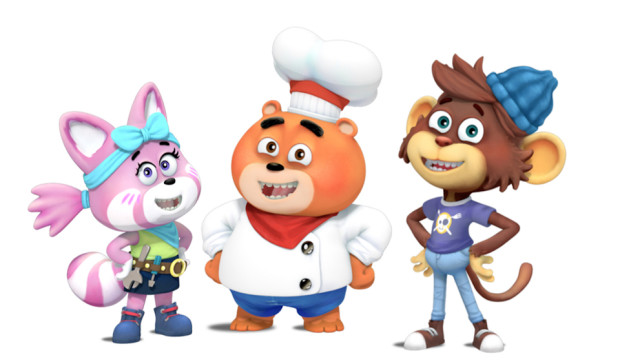 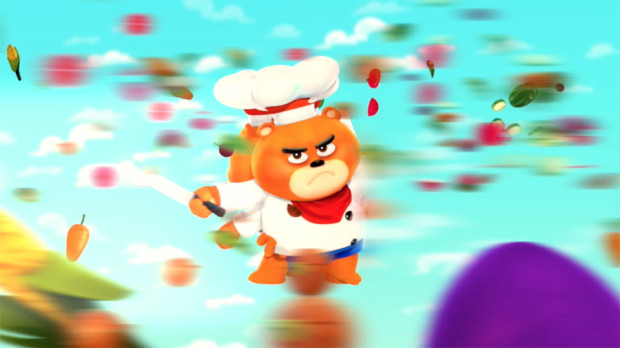 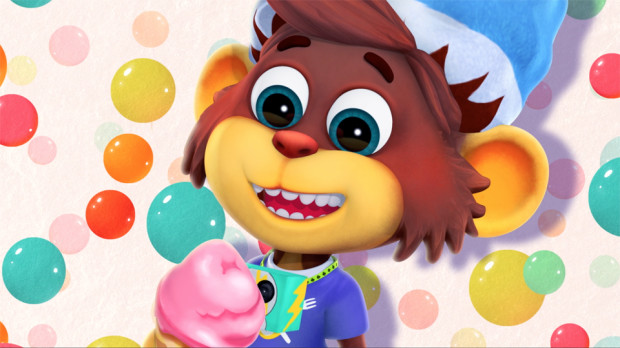 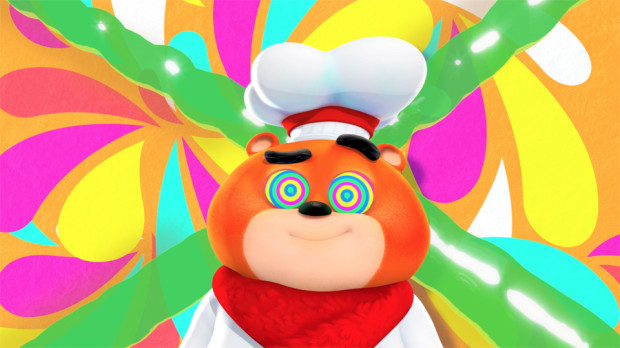 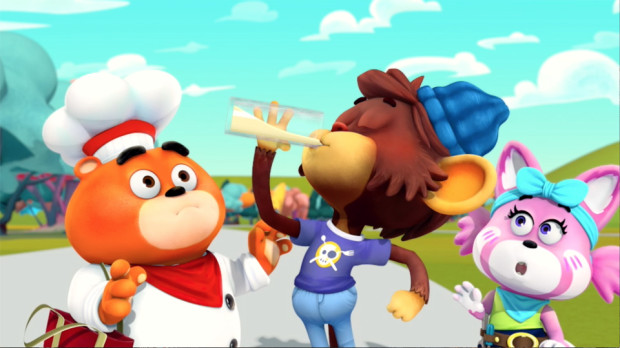 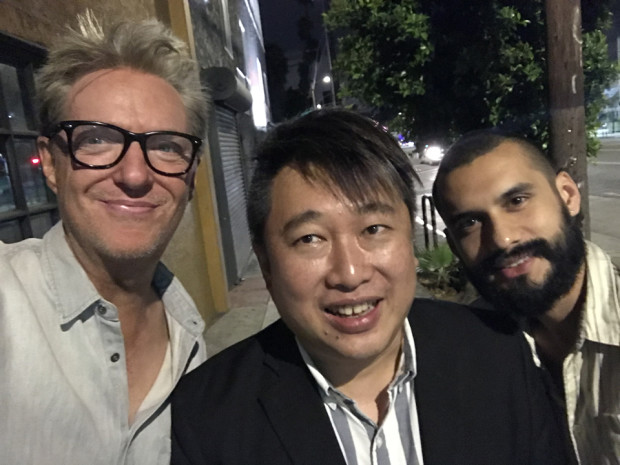