The fun tagline for Disney Channel’s new show Gravity Falls describes its location as “just west of weird.” But if you’re looking for the real spot where the toon’s ideas come together, it’s the great mind of its young creator Alex Hirsch.

“Most of the characters on the show are based on ideas that I’ve had in my head for a while,” says the gifted 26-year old during a recent interview at the Disney TV Animation building in Glendale, Calif. “I really didn’t think of corralling them into one series until a couple of years ago.”

That’s when Mike Moon and Eric Coleman, the very well-respected top development execs at Disney Channel, approached him to work on the Fish Hooks pilot. Hirsch says, at that time, he really wasn’t actively thinking about doing a children’s show and was considering a more adult-oriented channel like Comedy Central or FOX-TV. But when opportunity knocked, he decided to use material from his own childhood.

“I thought, if I were to do a kids’ show, then it would have to be all about my favorite things,” he tell us. “Gravity Falls is actually inspired by the long summers my twin sister Ariel and I used to spend at our great aunt’s log cabin in the woods.”

The toon, which debuts this month on Disney Channel, follows the adventures of twin brother and sister Dipper and Mabel Pines who get involved in strange mysteries when they spend summers with their huckster great uncle in the peculiar Oregon town of Gravity Falls. 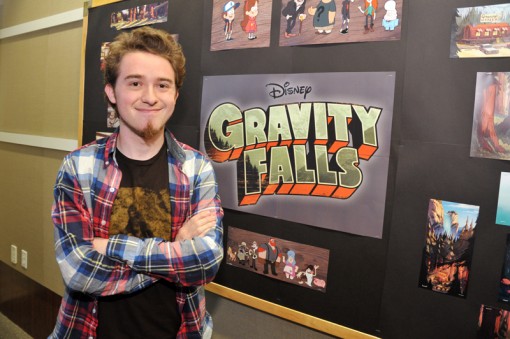 Coleman remembers that he was so taken by Hirsch’s passion and drive that he gave him the go-ahead, although they really wanted him to work on Fish Hooks.

“He told me that the drive to make this show was burning inside him like a nuclear reactor,” recalls Coleman. “He said, you need to pay attention when inspiration strikes. I was so impressed and moved by his passion to do his own show. The great thing about it is that the show had one of the smoothest development processes I can recall. It was one of those instances when the creator has a great vision and it’s paired with talent and the ability to execute it well. A year later, Gravity Falls became one of the highest-testing pilots that we had made.”

Hirsch, who studied character animation at CalArts, says he got a lot of attention from studio execs thanks to a student short called Off the Wall, which he produced during his senior year.

“I remember in one day I got a call from Pixar, Disney and Jeffrey Katzenberg himself—I’m not kidding!” His friend J.G. Quintel (creator of Regular Show) offered him a job on Cartoon Network’s The Marvelous Misadventures of Flapjack, where he also got to work with Pendleton Ward, the creator of Adventure Time.

“We used to hear these nightmare stories at art school about how development execs want to suck your blood,” says Hirsch. “But I have to tell you, it’s been such a great experience to work here at Disney. They’ve really defied the stereotypes! When I pitched the series, they didn’t say, ‘How can we make more toys,’ or ‘Everyone is doing elephants, let’s make your show about elephants!’ Eric [Coleman] didn’t care about passing fads. He told me to figure out the personality of the characters and give viewers reasons to tune in every week. Make the show compelling from a story point of view. He cared about the quality, and he has really good taste! I guess I’ve been spoiled working with him because I really couldn’t have worked for a better development process. I can’t imagine it going as smoothly in the future!”

To create the look of Gravity Falls, Hirsh wanted to stay true to his hand-drawn, tactile roots. 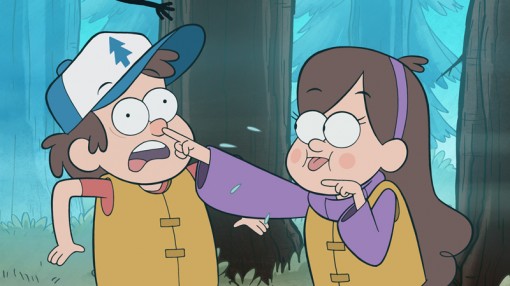 “I wanted the show to feel handmade and down to earth,” he explains. “A lot of the shows out there are so slick and polished. That’s not how I remembered my childhood being. I wanted the town to have a sense of atmosphere and history. The idea was that every tree in this town has story behind it.”

Hirsch credits the eye-catching look of the show to art director Ian Worrel, who used to be his roommate at CalArts.

“Ian has done an amazing job. I really lucked out at CalArts because I just happened to have this fantastic budding art director as my roommate. I had to wrestle him away from JibJab and Pixar and get him to work on the show with us.”

Although his famous student short was a Flash-animated project, Hirsch decided to go the traditional hand-drawn route for the Disney Channel series.

“There was some talk in the beginning whether we should do it in Flash or not,” he says. “I’m not an anti-Flash guy. But for the type of animation we wanted to do, hand-drawn was the way to go. The boards are done here [at Disney TV Animation studio in Glendale, Calif.] and the rest of the production is handled by Rough Draft and Emation Digital in Korea.”

When asked about the most challenging aspect of creating and exec producing a hot new show,  Hirsch doesn’t miss a beat. 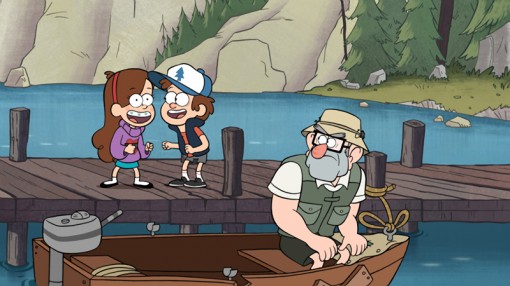 “I’d say that writing is the hardest part of the job,” he replies. “If writing wasn’t so difficult, all the TV shows and movies out there would be great! Even if you have a great team, you have to constantly challenge yourself and ask yourself, ‘Is this something that I’d want to watch?’ and ‘Are the characters funny or engaging?’”

Now that the show is ready to make a big summer splash on TV, Hirsch says he’s quite proud of the fact that Gravity Falls is both funny and different from the rest of the shows on the air.

“There aren’t many 22-minute animated comedy shows for children,” he explains. “Kids’ shows are usually 11-minute long episodes. I tend to watch the longer ones. I personally want a bigger story, higher stakes, deeper conflicts. I want comedy, and I like it fast-paced but I think it should be layered over something that has more meat to it. Every episode of our show has some really honest observation—nothing too deep, but a real character conflict or arc. I think that’s what I’m proudest of.”

Words to the Wise

Since attending CalArts played an important role in Hirsch landing his first job in the business, we had to ask him whether he thinks studying animation in college is necessary to thrive in animation.

“You know, college fees are very expensive these days, so this is a very touchy subject,” he answers honestly. “All I can say is that if you want to be in this business, you have to use the Internet, your college community, your high school friends—find other people who love doing the same things you do, because these people will become your friends, co-workers, girlfriends, boyfriends, even wives or husbands. They’ll be with you forever. The best thing that happened to me at CalArts was meeting a group of people who were as passionate about animation as I am. The truth is that it doesn’t have to be CalArts. It can be any college or it can be you going online with your blog. The important thing is not to sequester yourself in a corner. Learn from other people. This business is too small for enemies—you might as well be best pals and learn from each other!”

Since Hirsch based a lot of the character of Mabel Pines on his own twin sister, Ariel, we had to find out what she thought of her brother mining their childhood for comic material. Hirsch assures us that she was totally supportive and impressed by the show. 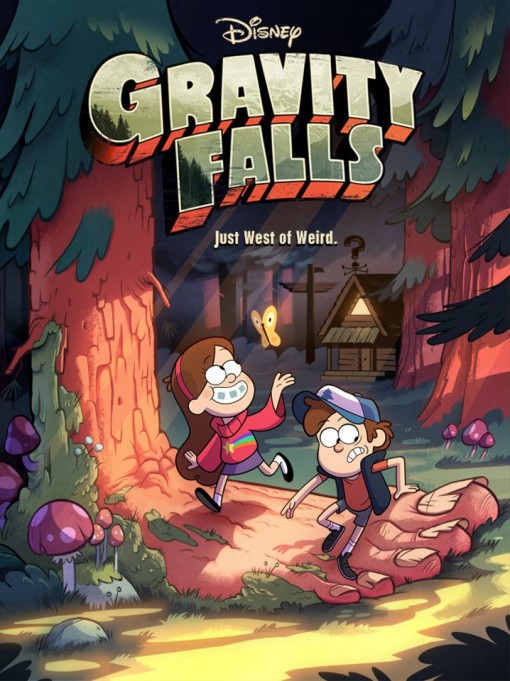 “She is super excited,” he notes. “Mabel is going to be one of the breakout characters of the show. I really owe it to my sister and her many quirks. When we were growing up, my sister was obsessed with the boy band ’N Sync. She even broke her toe jumping up and down during one of their concerts. So, we did a show about a boy band, and of course, I had to get Lance Bass to do the voice of the singer. I had my sister fly down to meet him. She also always wanted to have a pet pig when we were kids, so I gave Mabel a pet pig on the show and she can live vicariously through her. She owes me big!”

Tapping in to The Grid
Russian Animation on Ice