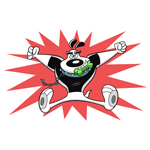 The back-to-back premieres averaged 3.6 million total viewers and topped the ratings for basic cable in their respective time periods for kids 2-11, kids 6-11, tweens 9-14 and total viewers.

The new shows boosted the audience for Nick’s Saturday morning block by double and triple digits over last year.

You may also like...
Related Topics:Planet Sheen, T.U.F.F. Puppy