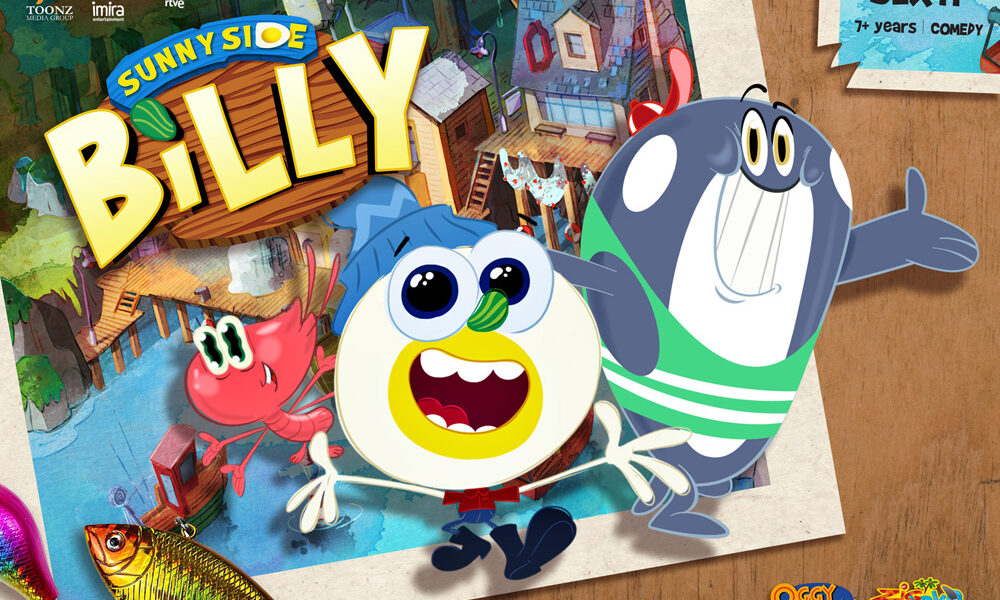 Spain’s leading teen and children’s broadcaster Clan has joined Imira Entertainment, the Spanish subsidiary of Toonz Media Group, as co-producers of the highly anticipated 2D kids’ animation series Sunnyside Billy. The flagship original production of Toonz was conceptualized by a team led by the legendary animation master Olivier Jean-Marie, who passed away in May.

Yago Fandiño, Head of Content for Children for TVE, described the show as “A funny, original series that brings together the legacy of Olivier’s irreverent and zany humor with a new generation of Spanish creators.”

Targeted at viewers seven and up, Sunnyside Billy is an upbeat, action-packed comedy about a friendly fried egg named Billy, who is oddly positive about every situation. The pre-adolescent Billy and his band of friends are on a mission to protect their friend, the mythical Big Fish, from the prying eyes of the greedy Tooth. The series is all about friendship, spreading positivity and facing problems without losing heart. The show, which will feature an original musical score, also has protection of environment and ecology as a recurring theme.

The international, award-winning production team of the series includes celebrated Belgian creator Jan Van Rijsselberge, who was part of the original creative team that conceptualized the show along with Jean-Marie. Rijsselberge’s credits include shows such as Robot Boy and Dude, That’s My Ghost! Toonz CEO P. Jayakumar and Imira CEO Carlos Biern serve as executive producers of the show.

“Sunnyside Billy is a truly international show with a very strong pedigree, coming from the creators of superhits like Oggy and the Cockroaches and Zig and Sharko. It is one of the last projects that Olivier Jean-Marie worked on,” noted Jayakumar. “Together with Clan, we are committed to produce this series in the highest standards and elevate it to the ranks of the greatest ever kids animation shows made.”

“We are very excited to partner again with TVE creating together international shows incorporating top animation teams from Spain, where female artists are equally represented, with great award-winning creators on board. We see no better channel to partner for this show but Clan in Spain,” said Biern.

Previous co-productions between Clan and Toonz in Spain include successful shows like Sandra, the Fairy Tale Detective and Bat Pat. The 52 x 11′ Sunnyside Billy is being developed and produced at Imira’s production facilities in Spain. Post-production works will be done at Toonz’s Irish subsidiary studio Telegael. Sunnyside Billy is expected to roll out in the first quarter of 2023.