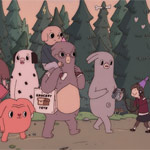 If only all camps were as exciting and fun as the one featured in Julia Pott’s awesome new animated series Summer Camp Island, no kid would  ever want to stay home. The much-anticipated new show which debuts on Cartoon Network this month,  casts its spell on you in the first few opening minutes, and doesn’t let go until you fall in love with absolutely everything about it!

Pott, who made a big splash with her first two indie shorts Belly (2011) and The Event (2012), and was also part of the Adventure Time story team, recalls being inspired by how she felt when she first moved to York City right after graduating from Royal College of Art in London. “I was incredibly homesick as it was the first time I’d been more than an hour drive from my parents and I was A MESS,” she tells us. “When it came to coming up with an idea for the show, I drew on my experience of homesickness and wanted to use the kid equivalent of what I was feeling, which was summer camp.”

For visual inspiration, Pott poured over the famous scene in Pinocchio where the boys are turning into donkeys and are crying to go home. “The additional layer of magic to the camp came from how I saw the world as a kid,” she recalls. “I remember being quite certain that there were monsters under my bed, a shark living in the retractable wall of my swimming pool, and that at some point in my life I would sink in a large vat of quicksand. Everything seemed possible when you’re a kid and you’re so much more attune to the strange and spooky. I wanted the show to embody that kid logic!”

After the show got picked up, Pott went to the Comic Arts fair in Brooklyn looking for people who might be a good fit for the show. “As I was going around buying a bunch of comics and meeting different artists it occurred to me that I had spent so much of my career up until that point comparing myself to other artists, not feeling good enough,” she says.  “Now I had had an opportunity to collaborate with the artists that I greatly admired and create something as a community instead of me just alone at my desk. It made me incredibly excited for the show and that continues to be the most fun part of it, that it doesn’t belong to one person but it belongs to all of us.”

Pott and her team work out of CN’s Burbank studio. Many of the crew came from Adventure Time, so the creative process is very similar to that structure. “We write an outline and a premise each week, and then hand it out to be storyboarded by a team of two storyboarders,” she explains. “They do a two-week rough thumbnail pass and then the writers, supervising producer (Cole Sanchez) and storyboard supervisor (Lindsey Pollard) give notes. They then have a week to do a second thumbnail pass, and they go into two weeks of clean up. Cole and I then do a creative pass on the final board and once it’s approved by the network we record the voice actors for the episode.”

The show is then translated into an  animatic by animation editor Oliver Akuin, followed by a creative pass done by supervising director, Niki Yang. Afterwards, it’s time for a breakdown with all the department heads. Each department then starts working on the board to get ready to ship to Korea. Pott and the show’s art director Sandra Lee then go through all the backgrounds. “It’s then sent off to Korea to be animated by Rough Draft who are the most lovely, incredible studio,” says Pott. A few months later, we get a work print back and we send creative and technical notes on the animation. We then lock picture and move on to sound effects, music and the final mix. There are about 40 people working on the show in the states, and many more in Seoul.”

Pott says the toughest aspect of the show is the self-criticism. “It’s very hard not to spiral and second guess your choices,” she admits.  “When something isn’t going the way you want, and you’re working to a timeline and there are other things drawing your attention you can often beat yourself up and tell yourself it isn’t good enough, that you’re not good enough. “

She says Adventure Time exec producer Adam Muto gave her some great advice when she first started out, that not every episode can be your episode. “When you’re working in television sometimes the timeline doesn’t allow you to make an episode exactly how you envisioned it, and if you can find some aspects of each episode to be proud of, then that’s what you should focus on. It’s been a great lesson in letting things go.”

From Silly Symphonies to Sabrina

Looking back at her childhood faves, Pott says she loved the emotional power and beautiful stories of Dumbo and Pinocchio. “I also loved Looney Tunes, Silly Symphonies,  Animaniacs, Rugrats, and Aaahh!!! Real Monsters. In terms of live-action movies and television, I loved E.T., Gremlins and Sabrina the Teenage Witch — movies and TV shows that were both gentle, relatable and a little bit strange — like a spooky warm blanket!” she says with a smile.

So does she use her own childhood memories in the show? “I have never been to summer camp, but I have seen the movie The Parent Trap many, many times, so I feel like an expert!” she responds. “I spent every summer visiting my Grandma who lived near the beach. We’d stay in a motel and meet so many new kids and have those fast friendships where you explore, run around with them and become pen pals forever. Those were some of my greatest memories. Summer for me always felt like this very specific space that was separate from who you were back home; where you were free to be yourself, not tied to school or what people expected of you!”

It’s also interesting to see how much the show has evolved from the original pilot which was made two year ago.” It showed me so much of what I did and didn’t want from the show,” Pott points out. “In the original pilot, we had Oscar having a crush on Hedgehog, and as we moved on to the series we realized that it was so much stronger if the romantic element was taken off the table. We wanted their relationship to be based on unconditional love and support.”

Pott drew on all her best friendships. “It was about that deep warmth and love; and the understanding that there’s nothing that person could do to make you love them any less,” she says. “I’m a big fan of Charlie Brown, and we’ve definitely draw a lot from that sincerity and gentle humor, and we all ultimately want to make a pretty gentle show with real, relatable characters.”

A big fan of animation artists such as Igor Kovalyov and Priit Pärn, Pott believes that their aesthetics and their storytelling are both strange and logical. “I’m most drawn to animation for how it could represent your emotions,” she maintains. “If you’re feeling embarrassed, you feel like you’re sinking into the ground, and with animation you can explore that, really put onto the paper the exact way you are feeling inside.”

For now, Pott can’t wait to see how audiences will connect with her whimsical new universe. “I would love for viewers to be able to see themselves in the characters, and to have the characters feel sincere, real and funny in the way that real life is funny, but with an extra layer of strangeness and nostalgia!”

Summer Camp Island premieres on Cartoon Network and Boomerang (all 20 episodes back-to-back) on Saturday, July 7 at 6 a.m. through Sunday, July 8. All episodes will go into rotation for 48 hours.

Julia Pott on Creating Your Own Show:

“Develop an idea that you’re excited about and feels personal to you. When I was pitching Summer Camp Island, I realized pretty much every idea I’d ever had was in this one pitch bible, which was terrifying but also exciting. I had made myself a limitless world where I could explore all my greatest loves. Don’t be too hard on yourself or overthink what you’re doing too much: If you love it, that will radiate off of you when you pitch it.” 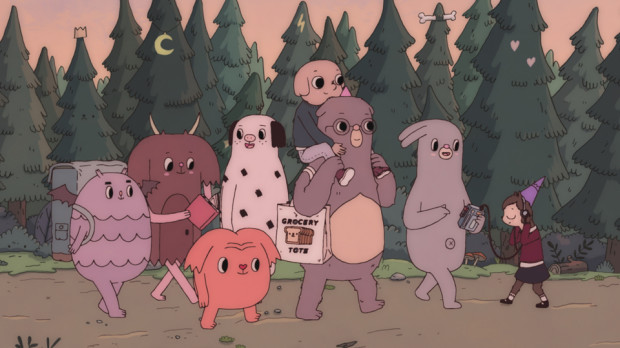 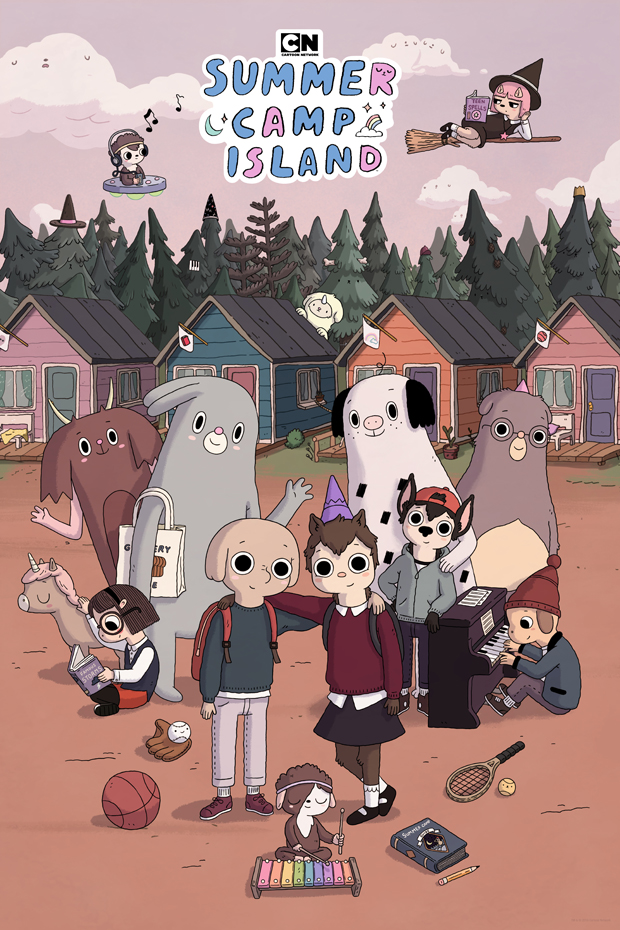 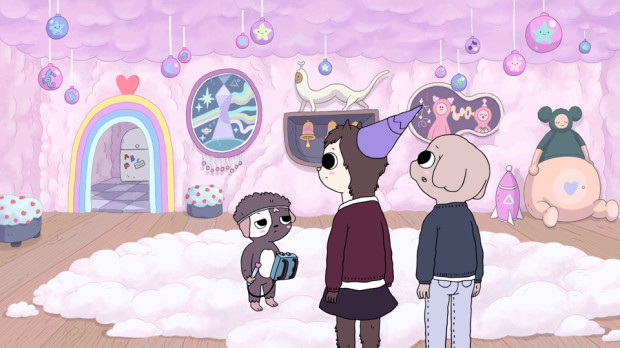 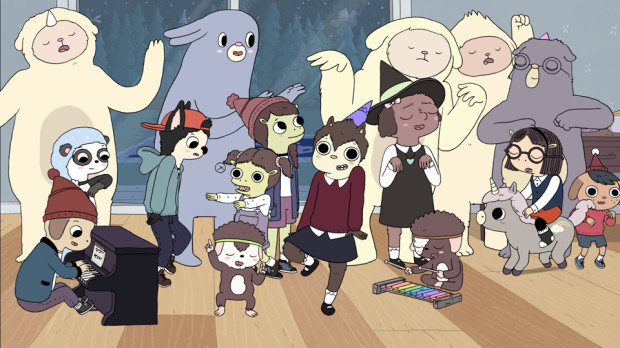 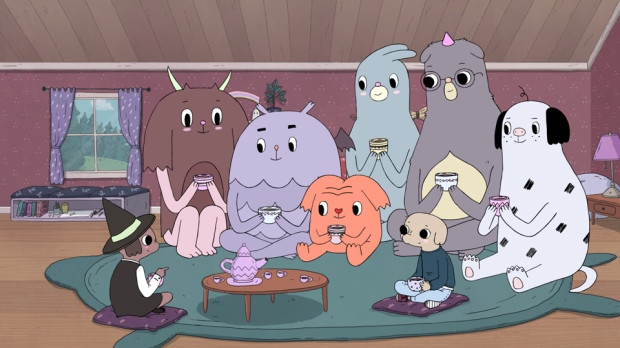 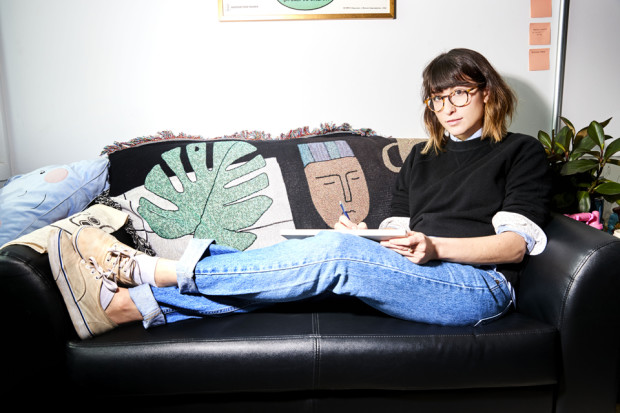