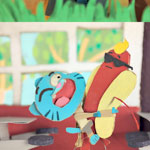 Cartoon Network’s BAFTA-winning series The Amazing World of Gumball is continuing to creatively play with animation techniques, genres and hilariously/painfully relatable topics in its sixth season. As part of this grand tradition, the new episode debuting Monday, May 10 features a craft table stop-motion flashback sequence created by London’s Studio AKA.

Created by Ben Bocquelet, the show follows a 12-year-old cat named Gumball, his BFF/adopted goldfish brother Darwin, his rabbit sister Anais and the rest of their off kilter family and friends as they constantly find ways to turn everyday situations into insane misadventures.

In Season 6, Episode 6 — “The Cringe” — Gumball runs into Hot Dog Guy (a sunglasses-wearing talking hot dog). However, neither of them can seem to get past the awkwardness they have always felt around each other, a problem which culminates in some ultimate cringe-inducing moments when Gumball decides they must relive all of their memories of awkward encounters with each other.

Tasked with creating this two-minute cringe-fest, Studio AKA director Kristian Andrews opted to create a “super-homemade-puppet-film.” With a team of model makers and puppeteers, Andrews combined everyday household items like toilet roll, cotton wool, cardboard — and a lot of gaffer tape — to create simple rod-articulated puppets which were captured in a series of “daft-and-loose” performances. The stop-mo footage was then combined with some artful 2D animation and subtle compositing.

“We all love Gumball at the studio and jumped at a chance to contribute to the show,” said Andrews. “Building our own janky version of the characters and world with cardboard and glue somehow felt like a fitting tribute. However, delving into Gumball’s slightly rambunctious psyche meant a lot of cardboard models got squished along the  way—it was carnage!” 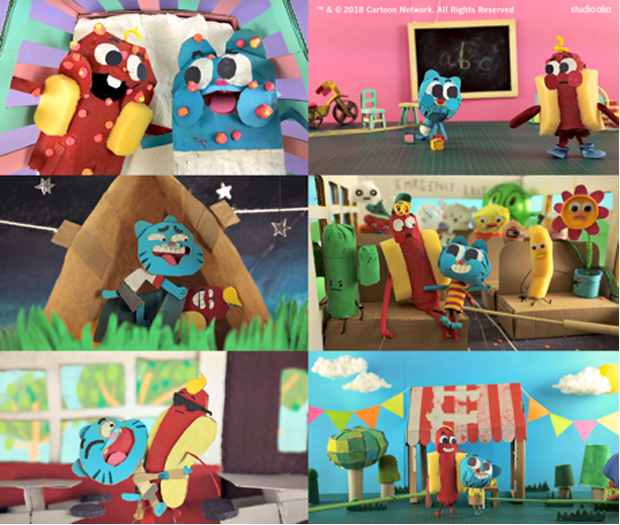 You may also like...
Related Topics:Ben Bocquelet, Cartoon Network, Kristian Andrews, Studio AKA, The Amazing World of Gumball