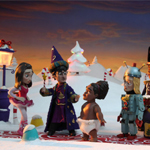 Fans of classic holiday-themed stop-motion animation have a real treat in store for them when they tune in to NBC’s popular sitcom Community this Thursday (December 9). In this homage to favorite Rankin-Bass specials such as Rudolph the Red-Nosed Reindeer and Frosty the Snowman, Abed (Danny Pudi) wakes up in stop-motion animation and takes it as a sign that he and the group must rediscover the meaning of Christmas!

The task of creating the stop-motion animation went to award-winning animator Kelli Bixler, puppet fabricator Justin Hilden and the amazing team at Bix Pix in Burbank, Calif and Starburns Industries. In six weeks, the hard-working and talented crew created and delivered 67 puppets, 74 heads, 158 arms/hands, 256 eyes and 54 teeny costumes. Starburns Industries then shot the 22-minute episode in six weeks. It’s no secret that stop-motion animation writer Dino Stamatopoulos (Morel Orel, Mary Shelley’s Frankenhole) also plays the character Star-burns and is a writer on Community. The animation was produced by 23D Films, with James Fino and Joseph A. Russo serving as executive producers.

This isn’t the first time Bix Pix has been behind a dynamic retro holiday special. In 2006, the studio delivered the Annie-nominated Holidaze: The Christmas That Almost Didn’t Happen as well as a couple of well-received Saturday TV Funhouse shorts for SNL.

“It’s going to be like a timeless Christmas classic in the stop-motion medium that used to give us so much happiness as children,” says creator Dan Harmon. “There’s a reason for it to be stop-motion animated, but it’s not a dream. It still exists within the reality of the show.” The episode was produced by Hend Baghdaddy and directed by Duke Johnson. It airs Thursday, Dec. 9, at 8 p.m.