The March 30 premiere of new original toon Star vs. The Forces of Evil from first-time series creator Daron Nefcy is officially the #1 animated series debut in the 15-year history of the Disney XD network– including Toon Disney. With 1.2 million Total Viewers, it is #2 overall (behind 2012 live-action series Lab Rats), is the #2 animated series debut ever in Kids 2-11 and Kids 6-11, and the #3 animated launch in Boys 6-11 — making it the solid #2 half-hour in Kids 6-11, behind only the longer established Disney Channel.

Star vs. The Forces of Evil is produced by Disney Television Animation and follows fiercely awesome teen princess Star Butterfly. After receiving an all-powerful magic wand for her 14th birthday, Star is sent by her Royal Parents to live with the Diaz family on Earth, bringing her unique interdimensional style to her new home. With the Diaz’s son Marco, Star learns to navigate the perils of Earth high school and embarks on dimension-hopping adventures across the multiverse — all while keeping her wand out of the clutches of the evil Ludo and his monster underlings.

Star‘s debut beat the previous animation record set by the October, 2014 launch of Star Wars Rebels. Across its premiere and encores to date, the new show has reached over 3.9 million unique Total Viewers, showing solid performance with both genders. The premiere more than doubled year-ago time period levels in Total Viewers, and increased by double digits among target demos including Kids 2-11 and Kids 6-11. 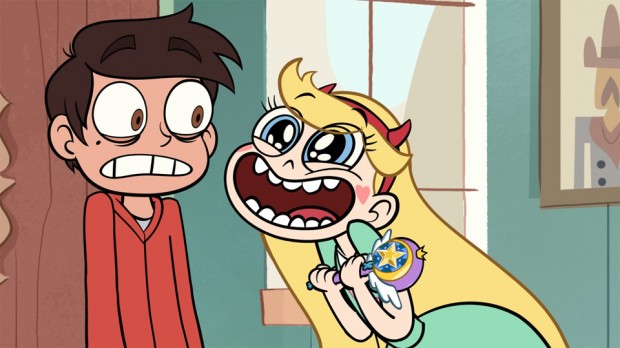