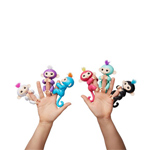 Quebec-based animation company Squeeze (Cracked) has been chosen by innovative toy company WowWee to bring its adorable animatronic collectibles the Fingerlings to life with a new short-form series, launching this spring. Already an international sensation, Fingerlings was named the overall 2018 Toy of the Year and Collectible Toy of the Year at the recent New York Toy Fair.

“We love bringing life to colorful creatures that spark imagination and have the potential to make an strong impression around the world,” said Denis Doré, Squeeze’s president and cofounder. “We’re extra excited to do it with talented partners who aren’t afraid to innovate. That’s exactly what’s happening with WowWee and their irresistible Fingerlings.”

The animated Fingerlings episodes will be written and directed by Kevin Munroe, known for his work on the feature films TMNT, Ratchet & Clank and as a storyboard artist on My Little Pony: The Movie. Munroe recently co-wrote and directed a feature for which Squeeze provided the animation and character modeling.

“Tasked with producing animated content for this amazing brand, I knew exactly who we needed to partner with to bring a Fingerling level of fun and excitement,” Munroe commented. “From our shared production experience, Squeeze was the immediate choice for creating more great character-based content together.”

Richard Yanofsky, president and cofounder of WowWee, added: “Fingerlings are more than just toys to us. They’re full characters that we’d love to bring to life and share on multiple platforms. Partnering with top-notch creators like Kevin and Squeeze is the foundation of an adventure that we hope to share for many years to come.”

Season 1 of the Fingerlings animated series will be produced by Squeeze, WowWee and Munroe. Russell Binder and Marc Mostman are executive producing for Striker Entertainment, the global licensing agent for Fingerlings brand extension.