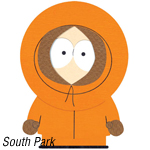 South Park is set to return Oct. 5 on Comedy Central with seven new episodes comprising the second half of its 15th season.

According to a report at EW.com, the network also has renewed the series for an additional two seasons, meaning the show will be on the air at least through 2013.

Created by Trey Parker and Matt Stone, South Park fans had speculated that the series’ end may be near after the finale of the first half of the 15th season suggested the end may be near.

Stone and Parker have scored a major hit with their Tony-winning Broadway musical, The Book of Mormon. The pair also created the films BASEketball, Team America: World Police and South Park: Bigger, Longer and Uncut, as well as the TV series That’s My Bush!