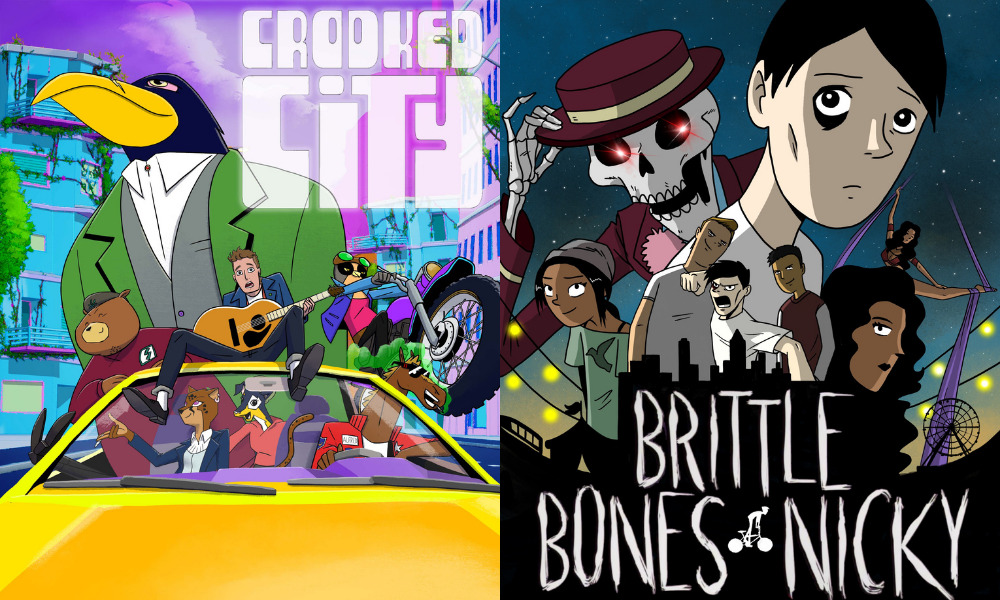 This is a natural evolution, beginning in 2019, when they collaborated together on creating 16 viral animated narrative music videos for Rare Americans garnering 119+ million views on YouTube alone. Leah Solis, Les Solis and Lou Solis from Solis Animation, along with James Priestner and Jared Priestner from Rare Americans, form Crooked City Studios’ leadership team.

Under the new banner, there will be 15 new music videos slated for 2022, along with two original animated projects in development: episodic series Crooked City and a Brittle Bones Nicky movie. Both are created by James and Jared Priestner, who will also executive produce both projects. Leah Solis (John Ware Reclaimed, Gary and His Demons) will oversee both productions as the producer.

Crooked City, the company’s namesake, is an 8 x 30′ series about a struggling young musician plucked from Earth and offered fame and fortune on an alien planet. When he discovers that he is merely a pawn in a game of galactic domination, he is faced with a difficult choice: achieve super stardom or start a revolution. James Priestner will voice the lead role as the struggling young musician, and it will be directed by Lou Solis. Crooked City‘s pilot episode will be completed Spring 2022, with the remaining episodes finished in late 2022.

Brittle Bones Nicky is slated as a feature film directed by Les Solis. It is about the sharp-witted young Nicky’s quest for family and a safe haven, as he is forced to navigate a broken social system with the help of his future dead self. The project is inspired by the music video by Rare Americans, which garnered 100M+ streams and thousands of comments from fans looking for the story to continue. Brittle Bones Nicky will be completed at the end of 2022.

“We’re thrilled to embark on this new venture with the Rare Americans crew and welcome everyone to this animated universe of ours,” said Leah Solis, Crooked City Studios’ co-founder. “The stellar combination of the band’s songs and our visual storytelling really seem to resonate with people and it’s been such a joy to witness their fans gravitate towards our animated videos. Building Crooked City Studios is an exciting opportunity to develop fresh content and introduce new viewers to an already growing engaged audience.”

Co-founder James Priestner added, “When we made the decision in early 2019 to enlist Solis Animation to animate three videos, it was really the turning point for Rare Americans. That spawned the beginning of an animated universe that’s now grown to over 300M listeners worldwide. This is just the beginning and we can’t wait to see what Rare Americans and Crooked City Studios are able to accomplish together. With a series, two films, and several music videos already in development, we are going to fly out of the gate as an original studio in 2022. Our goal has always been to make a positive impact on people’s lives and to tackle tough subject matter that kids are dealing with everyday. Our work will always reflect that core mission.”

Since 2010, Solis Animation has provided directing and visual services on a wide selection of works. Notable projects include Comedy Central’s Ugly Americans and Moonbeam City, Gord Downie’s The Secret Path, Gary and His Demons and other music videos for Jessie Reyez and Pup. Solis also animated the International Interactive Emmy-nominated series Zimmer Twins, as well as Charlie Hankin’s The Summoner for NBC and Evan Goldberg’s short film Reel Start Organization.

Rare Americans launched in 2018, and have since garnered over 300M cross-platform streams, 1M+ social media followers, a top 100 Billboard charting album and a sold-out North American tour in 2022. Besides the Priestner brothers who founded it, the band’s roster also includes Slovak guitar virtuosos Lubo Ivan and Jan Cajka, and Duran Ritz on drums.