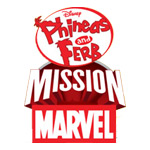 This summer, Disney offers a special treat for toon heads and comic-book fans as Phineas and Ferb encounter the Marvel Universe.

This summer, a little milestone in toon history will be reached as the first-ever animated Disney/Marvel crossover special hits Disney Channel. The popular Mouse House toon selected for this honor is Dan Povenmire and Jeff “Swampy” Marsh’s Emmy Award-winning musical comedy Phineas and Ferb, which has been a jewel in the channel’s crown since its 2007 premiere.

In Phineas and Ferb: Mission Marvel, the two step-brothers (and their savvy pet platypus) team up with heroes from the Marvel Universe to take down comic-book baddies as well as their infamous, if somewhat incompetent, foe, Dr. Doofenschmirtz. The adventure kicks off when Dr. Doof’s power draining “inator” weapon saps Spider-Man, Iron Man, Thor and Hulk of their super powers. When super villains Red Skull, Whiplash, Venom and M.O.D.O.K. find out, they team up with Doof to cause mayhem in Danville, and it’s up to Phineas and Ferb to restore strength to the heroes and help save the day. 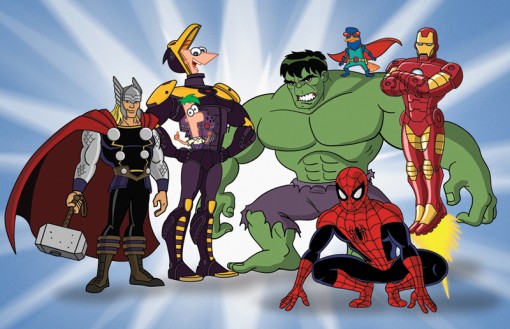 According to the series creators, who cut their animators’ teeth on iconic toons like The Simpsons and Rocko’s Modern Life, the concept was dreamed up by the Disney Channel as a fun way to further merge the two brands.

“Disney asked both Marvel and us if we were interested, and we sure were,” says Povenmire. Marsh adds, “Yeah, luckily Marvel was into it, too, or we might have looked foolish jumping up and down like that!” 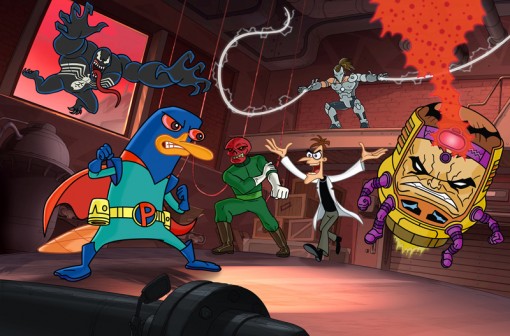 The multi-talented showrunners share that for them getting to work with a group of familiar Marvel characters for the first time was like having new toys to play with–or rediscovering toys they had loved as children.

Audiences will have multiple opportunities to enjoy the fruits of their playtime with the Marvel kids, as Disney has planned a multi-platform roll-out for the big event. Starting August 12, Disney Channel will feature a weeklong series of Phineas and Ferb episodes as a countdown to the special (and offering a first look on its SVOD service and WATCH Disney Channel website and app). The premiere on August 16 will be simulcasted on WATCH and Disney Channel Mobile VOD, and the next day the special will be available for purchase on iTunes, Amazon and Xbox. A following August 25 Disney XD debut will be hosted by Dr. Doof via Doof’s Daily Dirt and will feature six spots, including Doof dishing on his exploits with the villains and encouraging fans to go to Disney.com for a new game inspired by Mission Marvel.

The Mouse has also planned a fun licensing tie-in, with The Children’s Place offering Marvel and Phineas and Ferb licensed tees starting in mid July–fans who purchase one of these stylish duds in store starting August 1 will receive a free school supply kit. 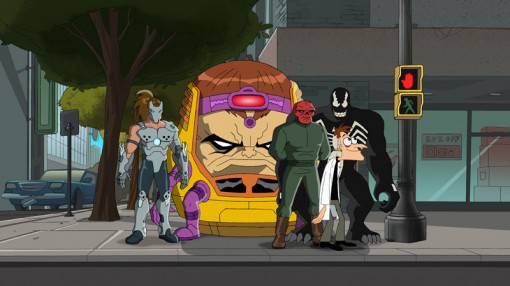 Despite all the hubbub surrounding the special, Povenmire and Marsh have not lost sight of the fun of bringing these worlds together (or lost their sense of humor in the heat of production). They were more than happy to answer a few goofy super hero-related questions for us. Povenmire, a self-described “Spider-Man guy”–“He’s young, sarcastic and he has spider powers, what’s not to like?”–says if he could have any super power, it would be the ability to fly. Marsh, who says he always preferred “unconventional” heroes like Deathlock, Luke Cage and Silver Surfer (but admits to still having a ton of Iron Man comics in his collection), would opt for invisibility–although he says he already has an enviable power: immunity to ice-cream headaches.

On one thing both halves of the Phineas and Ferb dynamic duo can agree: Fans of the toon and of the Marvel Universe who tune in to Mission Marvel are going to love the comedy, thrill at the action and puzzle over the line: “Who was that masked beaver-duck?”

Phineas and Ferb: Mission Marvel premieres Friday, August 16 at 8 p.m. on Disney Channel, then August 25 at 10 a.m. on Disney XD. 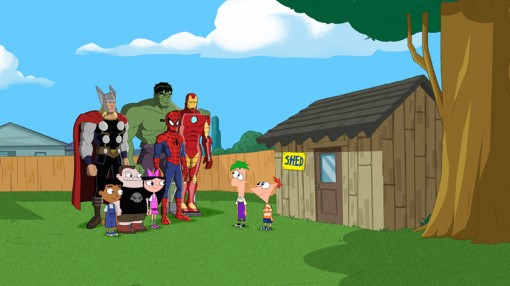